Currently filming in Spain the big screen adaptation of Ubisoft's long running and highly successful video game franchise Assassin's Creed is due for release Decmebr 21st, 2016. Directed by Justin Kurzel (Macbeth) and based upon a screenplay written by Bill Collage, Adam Cooper, Scott Frank (The Wolverine) and Michael Lesslie the movie will feature Michael Fassbender (Alien: Covenant, X-Men: Apocalypse) as Callum Lynch, a young man whom discovers while using the Animus (a virtual reality device capable of recreating the memories of the users ancestors stored within their DNA) that one of his ancestors, Aguilar, whom lived in 15th Century Spain, was a member of the secretive order known as the Assassins Creed.

Callum discovers through Aguilars memories that Abstergo Industries, a powerful multi-national corporation ran by Alan Rikkin (Jeremy Irons) and his daughter (Marion Cotillard) is the front for the Assassin's arch enemies, the Templar, whom seek to subjugate mankind and elminate free will, democracy and peace through obtaining powerful items known as the pieces of Eden, ancient technology created by an alien race that pre-visited Earth millions of years ago. Assassins Creed will also star Ariane Labed (pictured below), Michael K Williams and Brendan Gleeson (real life father to Star Wars: The Force Awakens' General Hux portrayed Domhall Gleeson). 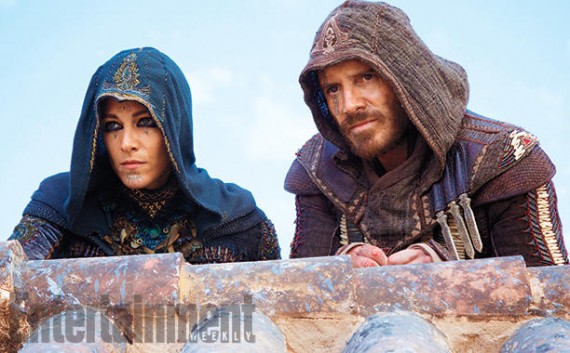 Speaking recently to EW, Fassbender admitted that he had not played any of the video games in the series before accepting the role, but has subsequently played the games “to get an idea of the physicality of the character.”

“A lot of the stuff in the game is Parkour. It’s about getting in close to the target–close quarters fighting.”