With the next instalment of the worlds greatest science fiction saga a little over a year away, and with principal photography soon to wrap up, one would assume that any news on a teaser trailer would not circulate until late spring / early summer next year. But because this is no ordinary movie, becuase it is a global phenomenon that will see the original cast return after a 30 year hiatus, and because its Star Wars it appears we ma be getting our first teaser trailer sooner rather than later. 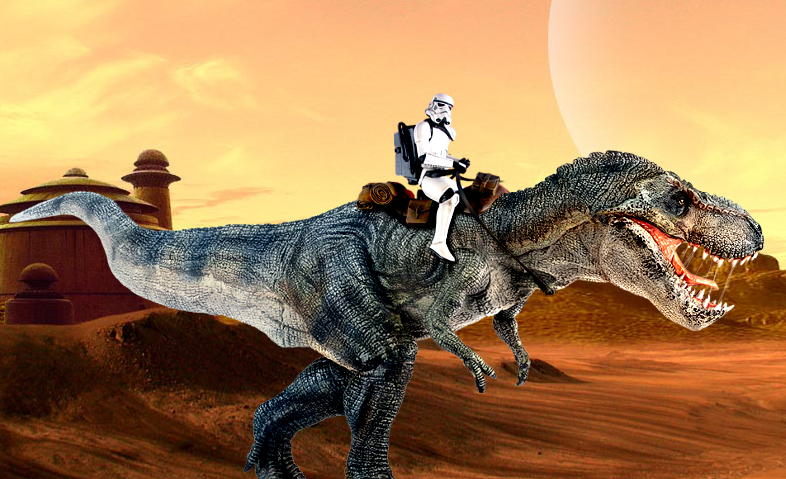 Reports of Stormtroopers riding T-Rex's on Tatooine are unfounded!

According to a reportedly reliable source on the John Williams Fan Network, the teaser trailer is actually complete and is to be scored by the legendary composer John Williams on November 15th. With director J J Abrams reliance on practical effects during filming this seems highly possible, as the trailer will need little if any, expensive and time costly CGI effects added, minus the lightsabers of course.

If this news is true a lot of movie fans will be getting many early Christmas presents this year, with the recently released Avengers: Age of Ultron trailer soon to be followed by a Batman v Superman: Dan of Justice teaser, a rumored Jurassic World teaser and a rumored Terminator: Genisys teaser, and now this - its all a little too much!

I mean, This seems to be going really fast, But perhaps it's because I've been acustomed to the Long Drug out wait of Movies with CGI Addiction...

It's going to be good... As Rex Fan's Gif Suggests.

Trending Articles
Transformers: The Last Knight to delve into Optimus Primes past?
Japanese Star Shun Oguri Joins Godzilla vs. Kong
Book of Boba Fett revives the Naboo N-1 Starfighter as The Mandalorian's new Ship!
Alien: Covenant concept artist Dane Hallett tries his hand at Predator!
King Kong – From Films to Video Games, What’s Next For World’s Favorite Beast?
Kong marks his territory as Godzilla vs. Kong filming gears up!
The best bingo halls around the world
Scrapped Design Concepts for Alien: Resurrection's Newborn Xenomorph
Breaking: New Godzilla Singular Point Trailer Revealed
A Quiet Place Part 2 will explain its Alien Origins! Watch the Trailer Here!
Forums & Community
Should I leave? 1,262
The truth about my responses and my postings 271
the team's members are growing! 4,352
Is biollante going to be in GVK 2 219
DBG: Another Poll 384