John Boyega will be familar to science fiction fans for his appearance in Joe Cornish's 2011 British sci-fi movie Attack the Block. The British actor, whom also recently appeared in 24: Live Another Day, is a relative newcomer to the movie industry, though after appearing as AWOL Storm Trooper Finn in the forthcoming Star Wars: The Force Awakens, we expect that the Peckham born and raised actor will become a household name. Recently, during the Star Wars Celebration event in Anaheim, USA the actor was interviewed by EW, heres what he had to say...

EW: A lot of people know you from Attack the Block, or 24: Live Another Day. But tell me about you as a person growing up.  Daisy said people say, ‘Oh you and John must get along because you’re from the same town, but she says, ‘No, we’re not, really.’

Boyega: [Laughs.] She’s from northwest and I’m from southeast. I grew up in a place called Peckham. I’ve lived there near enough 15 years of my life, and then moved around in the south and went back to Peckham, and grew up there. I was born in Denmark Hill in Camberwell area and was launched into a world of acting, stage, contemporary dance.

Boyega: And total shock. I started to [perform] in primary school, so I would’ve been 7 or 8 in my first experience in class. And then a woman called Teresa Early [an artistic director] gave me an opportunity at Theatre Peckham on a scholarship basis to train as an actor. And I was involved in the world of tap dance and all that kind of stuff.

EW: Did you get into it because it was something you loved or were your parents performers? Were they into arts?

Boyega: I tried to kick a ball because I thought I would be a footballer but I ended up scoring in our own goal! [Laughs.] And I was scrutinized for the rest of my life, so I decided to just let that be. And then I decided that, you know what? I think people watch me when I get into these characters that I have in my head, so perhaps I should try acting. So I did. 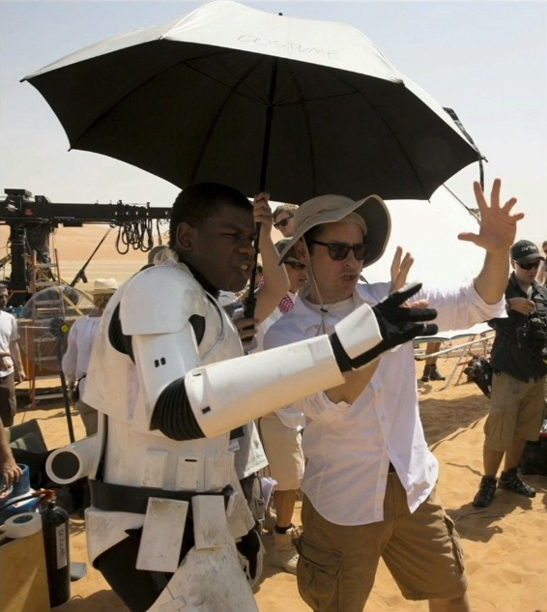 EW: What did mom and dad do? What were their professions?

Boyega: My dad is a minister, he’s a Pentecostal minister, and my mom takes care of disabled people. So they’re very helpful, give-back-to-the-world kind of people, and I decided to go in front of a camera.

EW: Well, being a minister is sort of like being a performer too. He’s got to get up on stage, the pulpit.

Boyega: Exactly. Honestly, when I was younger, I always thought, where did I get this acting bug from? Because pretty much everyone in my family is ministers or helpers in some sense, but after seeing my dad, Samson, preach, I was just like, you know what? I get it from this guy. He acts out different scenes, and he’s a real charismatic individual, so perhaps I got 1 percent of that.

EW: Also the minister’s kid is always the biggest troublemaker.

Boyega: [Laughs.] They do. But the discipline kind of got me into a universe of Jedi, and now I think I know how to have a foundation between the dark and the light.

EW: Did you pick up talents from your mother’s side as well?

Boyega: Well, my mum is a very special person. I love her so much. She’s always supported me from the beginning of my career, and honestly, she is the backbone of this whole thing. The absolute foundation and grounding is something that she brings. And obviously my dad, too, is a big influence on my life. It’s hard not to go through these stages of absolute craziness, but be humbled by the background, family, and all that stuff.

EW: So are you an only child? Brothers, sisters?

Boyega: I have two older sisters, and they’re amazing. They’re big supporters of this whole craziness. They’ve got really beautiful names, Grace and Blessing. Not sure they lived up to it when they were teenagers, but now they’re brilliant, and honestly, they’ve been so supportive, and my whole family’s been amazing. I love them so much.

EW: Onstage you said you got Harrison Ford to sign a replica of Han Solo in a stormtrooper disguise. Have you seen your action figure yet?

Boyega: I haven’t! I haven’t seen any action figure, but I know we’ve done some scanning and some molding, so I know that my face may just pop up on a shelf somewhere.

EW: Scanning? I love the old sculpts from the ‘70s but they don’t look anything like the actors.

Boyega: Oh yeah, I hope now that the artists are a bit more specific!

EW: What was your expectation coming to the Star Wars Celebration convention versus how it turned out? Were you uncertain or nervous? Because you have been told over and over tonot to talk about this movie.

EW: You mentioned not telling your parents when you were cast.  It’s a big responsibility, it must be daunting. Is it kind of scary facing that big, fervent fanbase?

Boyega: It’s not. It’s not scary coming here. I mean, I’ve done Comic-Con before with Attack the Block, and one thing that is universal is the absolute passion that all these fans share. You’re going into a place that’s going to be crazy, and to be honest, I’m going crazy because I’m a big Star Wars fan! We’re all going crazy and we all can’t wait for the film to come out.

EW: What was your favorite moment out on stage? What stuck with you?

Boyega: You know what stuck with me was the moment when we all came together and took the photos together [at the end.] It’s just so symbolic. There’s something symbolic about the new generation and the old coming together to take an amazing photo, that is historical. It just really represents what Star Wars is. We’re going back to Star Wars, back to the three originals and continuing that legacy. And that moment for me was insane because I’m looking at the crowd, and then I look beside me and I’m seeing Daisy, I’m seeing Mark Hamill, I’m seeing Carrie Fisher, and I’m like, where am I? So that was amazing.

EW: Until now, you haven’t been able to talk about the movie. Was it weird finally being able to talk when J.J. Abrams gives you the green light and says get out there and tell people – a little – about who Finn is?

sonictiger replied to The Human Characters of Monsterverse

SasquaDash replied to I’d rather see Kong fight brand new monsters instead of Toho monsters in another sequel of his.

Jack Capellini replied to I’d rather see Kong fight brand new monsters instead of Toho monsters in another sequel of his.

Jack Capellini replied to I’d rather see Kong fight brand new monsters instead of Toho monsters in another sequel of his.

How to Find CBD Gummies That Will Work for You just surpassed 1,000 views!

Kattozilla replied to I’d rather see Kong fight brand new monsters instead of Toho monsters in another sequel of his.

SasquaDash replied to I’d rather see Kong fight brand new monsters instead of Toho monsters in another sequel of his.

HinikunaGoji replied to The Human Characters of Monsterverse

Kattozilla replied to The Human Characters of Monsterverse

sonictiger replied to The Human Characters of Monsterverse

sonictiger replied to The reason the MCU can make solo films for obscure characters and why the MonsterVerse can’t.
More Activity