In all honesty being a general audience member when it comes to comic book characters I personally had never heard of Black Panther, so when Marvel Studios announced they would adapt the character for the big screen I did my research to find, what to me looked like a capeless version of DC's Batman. Looking deeper into the chracter I was then reminded of the Phantom from the 1980's cartoon series Defenders of the Earth, the character of which was later realized in live action in 1996 portrayed by Billy Zane.

After much research I have discovered a deep, thoughtful and highly honorable figure from the Marvel Universe, whose sense of right and decency outshines that of the more well known Captain America, though I had yet to really see the character in action, until last weeks trailer for Captain America: Civil War which will introduce the character to fans of the Marvel cinematic universe.

As is par for the course with many popular movies movie news website and publication Entertainment Weekly has grabbed exclusive interviews with the cast and promo pictures from the third Captain America movie, included within are some awesome pictures of Black Panther and an interview with Chadwick Boseman...

“He’s definitely not the life of the party in this instance, I think this is something true of the comic book character and the movie. You never quite know where he stands. There’s always a bit of concealing and mystery. So I think mysterious is more his boat. Not to say there’s not charm and he can’t be a ladies’ man and all that. It’s more like if there is humor, it’s more like James Bond.”

“There definitely is a sort of tradition that he’s torn between, in terms of how things were done in the past and how things need to happen now in this new world, I think there’s perhaps a bit of a maverick there, and then there’s also a need to live up to traditions and his father’s legacy. And not even his father’s legacy, but the entire nation of Wakanda. I think those are the things you will see. 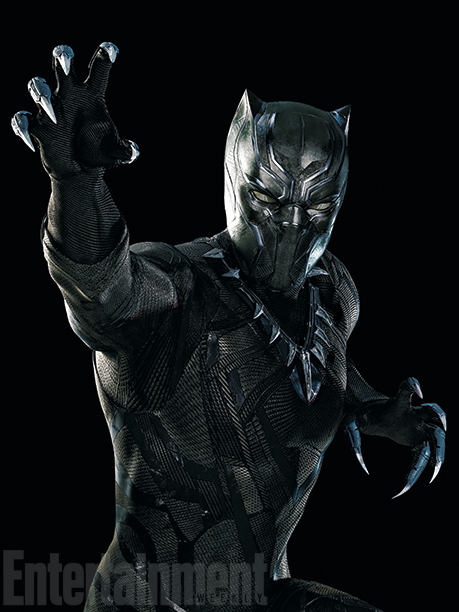 “In publishing, he is sort of this very wise and a sanguine figure who seems to know more than he lets on, I think this is Black Panther in his younger years, where he maybe is a little bit more fiery than I think how they write him in the comics because he’s very much in the nascent stages of being a hero. So that means he is probably more fallible than the Black Panther that you read in comics, but for reasons that are completely logical.”

"As for fighting style, Black Panther has a unique amalgam of moves. “There are some animal forms, but not just cat. He could be a snake, or various different styles. Obviously there’s an opportunity to do some capoeira,” the Brazilian martial art that combines fighting with dance, Boseman says."

"Part of Panther’s power is not just brute strength, but thinking ahead. “The key with T’Challa is to keep everybody on their toes. It’s to do the thing that is surprising, that you wouldn’t expect. So there’s a lot of agility and a lot of, like, ‘Why did he do that? Oh now I know why he did that. He was gonna come over here after he did that.’ I wouldn’t say he’s a ninja, but he does employ some of those aspects as well.”