In a hotel in Edinburgh, two of the most powerful Avengers were enjoying the time they had left together. Vision, using the Mind Stone to take on a human form, was looking out a window, while Wanda Maximoff sat in the bed of their room. Wanda walked over to him as she asked, "So what becomes of the Avengers?"

Vision was uncertain. "With luck, they'll put aside their differences when we need them to."

Wanda waved her hand as she looked into the Mind Stone, seeing the destruction it could potentially unleash. She gasped, before they heard screaming outside. Wanda put on her normal clothing and a jacket as she and Vision, still taking the form of a human, exited the hotel.

They saw two alien figures. One was a cloaked male wielding a glaive with golden blades, and the other was a female in white with blue hair with a triple-pronged spear. Corvus Glaive pointed his weapon at Vision. "Give me the Mind Stone."

"I'm afraid I cannot do that," Vision assumed his true android form, firing a beam at Corvus from the Infinity Stone in his head. Corvus blocked it with his blade, charging forward as Vision hovered in the air. Proxima Midnight fought Scarlet Witch as Glaive knocked Vision into a building with the tip of his weapon. Even his vibranium body wasn't impervious to Corvus' weapon.

Midnight kicked Maximoff, disorienting her before she and her husband cornered Vision. Corvus stepped on top of him, impaling his blade into the Mind Stone. Vision screamed in pain. "AAAAAAAAHHHH!!!!!" 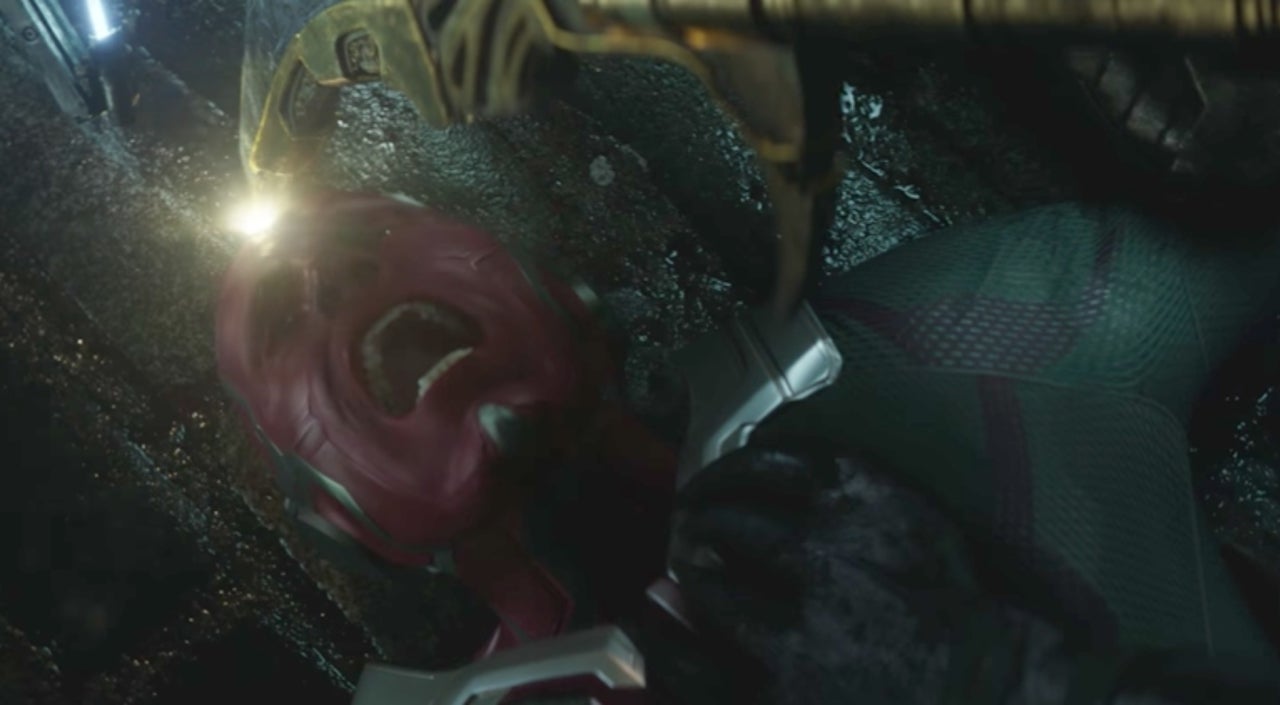 Enraged, Scarlet Witch used her powers to blast both members of the Black Order back. Out of the corner of her eye, Proxima Midnight spotted a figure in the shadows of the night, throwing her spear at it. However, the unidentified person caught it, and stepped forward, revealing a bearded Steve Rogers. "Hello there." Two other figures joined Steve, revealing themselves to be Natasha Romanoff and Sam Wilson. Sam activated his wings, turning to Wanda. "These guys bothering you?"

"We don't want to kill you," Natasha added her own snarky remark. "But we will."

He jumped up, kicking Proxima in the abdomen. Steve then attacked her, grazing her side with her own spear. She dropped to one knee, clutching her side in pain. Corvus, angered, lunged towards Romanoff, his glaive pointed at her. She sidestepped and stabbed him fatally with it. Corvus dropped to the ground. However, the wound quickly sealed, and he stood back up, attempting to take back his weapon.

They both yanked their arms back, shattering the glaive. Knowing that he was vulernable, Glaive yelled out to the injured Midnight. "Retreat!"

"What?!" Thanos was onboard the Sanctuary II, still on its journey to Knowhere. "You lost the Mind Stone?"

Corvus was kneeling on one knee before the titan. "The owners of the stone...had help."

"You're of no use to me," Thanos snarled to both Glaive and Midnight. "I no longer require your services."

He obliterated his minions with a blast of the Power Stone, before turning to Cull Obsidian and Ebony Maw. "Bring me the Time Stone, and do not fail!"

Beyond frightened, the two bowed. "We will not fail you."

Thanos' burning rage was still not quenched. "Then make haste and go!"

The two entered a ship shaped like the letter Q, headed for Earth. Normally, they wouldn't ever dream of attacking the blue planet. However, with the Avengers fractured and scattered across the globe, the world was vulnerable.

Steve helped Vision to his feet. "You okay?"

Vision clutched his abdomen in pain. "I require...medical attention."

Rogers took out a small flip-phone. "We've only got one option. I've got to contact Tony."

Seems closely accurate to what may happen in the film.