Over the weekend, I was lucky enough to get my hands on the two best Lego sets of the Avengers: Infinity War wave, and I'm going to review them, starting with my favourite, 76107 Thanos Ultimate Battle.

The set comes with 3 normal Minifigures and 1 Big-Fig. There is Star-Lord, who is copy/pasted from the Guardians 2 sets but without a helmet or jetpack. I wouldn't mind the reused figure if they gave him the updated Chris Pratt face with a mustache, like Owen from the Jurassic World: Fallen Kingdom sets. Gamora has the same head and hair as her previous iterations, but her new torso with a jacket looks great. Iron Man is the best of the bunch, with stunning leg and torso detailing, as well as four giant wings coming out of his back that are attached via a neck brace piece. I think they look great despite adding a lot of weight to the figure. The Tony Stark face has a two-sided head, and the angry expression has a HUD printed onto it, which looks great. He also comes with blue energy pieces called Power Burst elements, which are great if you want to have him look like he's shooting his repulsors at enemies. However, most of the disappointment came with Thanos, the one Big-Fig in the set. He has his helmet and shoulder pads, but no other armour, which looks awkward, and his legs should be black instead of dark blue. He also comes with a sword seen in new promotional art. 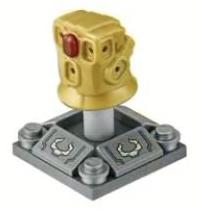 The first build of the set is the pedestal for the Infinity Gauntlet. The gauntlet has its inaccuracies, but overall, the gimmick of scattering the Infinity Stones across the sets is pretty neat. Speaking of which, this set includes the red Reality Stone. The gauntlet itself can be attached to Thanos' left arm.

The main build of the set is the Guardians of the Galaxy's new ship, which exceeded my expectations after the bad 2017 Milano. It's significantly larger, and the cockpit completely opens up. Inside is a detachable "space scooter" as the description calls it that can seat both Star-Lord and Gamora, as well as hold their accessories. The wings of the ship also have stud shooters.

The back has a detachable hatch that can be removed to reveal seats for two more Minifigures and a place to put the pedestal for the Infinity Gauntlet. The best feature of the set is that this can be connected with the escape pod from 76102 Thor's Weapon Quest to form one giant ship.

Interior space for two more Minifigures and the gauntlet

Able to connnect to another set

This is a really cool Lego set, I'm glad you like it.

Wow cool! Though you may wanna put spoilers warning at the title, Lego sets can be spoilery.