Everyone here who knows me knows how much I used to ****ING HATE THE STAR WARS PREQUELS MORE THAN LIFE ITSELF.  I'm over that now, but they still have flaws.  So today I'm counting down the top 5 worst things in the prequels.

One of the best things about the OT was the use of practical effects.  But in the prequels, there was filthy, ****ty, fake-ass CGI that made me foam in the mouth.  The overusage of green screens was absolutely ****ing atrocious.

The politics were boring as ****.  Yes, they were important to the story, but they weren't interesting at all.

3. Ruined the Character of Darth Vader 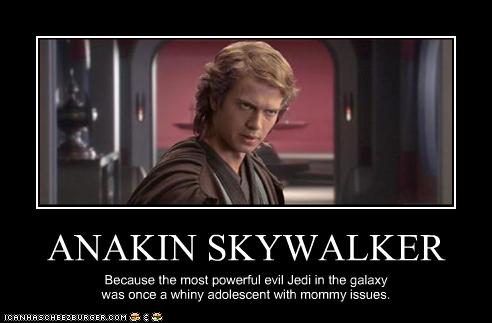 the same guy as THIS BADASS MUTHA****A:

As if the ruining of Darth Vader wasn't bad enough, they made the couple that would create the galaxy's new hope

Anakin "I don't like sand" Skywalker and Padme "You're breaking my heart" Amidala were a **** couple.  Even more so than Owen Grady and Claire Dearing in Jurassic World.  That's saying a lot.

Anakin was suppose to act like Luke, it was a conscious decision--considering father/son. And Anakin was also suppose to act temperamental, unstable, and emotional--also to invoke that he could turn at any moment.

Whelp. That was an outright failure, then.

And Gman, that "I don't like sand" BS line is UNFORGIVABLE

^Actually, instead of Jar Jar, I'll put the Godawful ****ing, sloppy, piss-tasting, ****-scented, cluster**** writing.  And yes, Jar Jar falls into that category.  That was also the worst part of ****ing Transformers

I mean, but...Sand is, coarse, rough, and it does get everywhere...

Darth Vader wasn't ruined because I typically just pretend the prequels were a bad dream and that's not the way it all went down. I work really hard to push them out of my head.

I will admit though, if I ever have to sit through the prequels without a gun to my head, I'd like to take a look at Topher Grace's edit. The man cut all three movies into a supposedly brisk and workable 85 minute film that is reportedly a better and tighter version of the prequels. Unfortunately the bad dialog and made-for-TV framing is still included, but some things can't be changed. Maybe one day we'll get the chance to see it:

Kylo Ren was worse than Anakin, In my honest opinion.

@Gman2887: Yes but the original, unedited prequels made him a whiny adolescent with mommy issues.

Ok let's break down the supposed ruining of Vader and Anakin.

Let's go in with what Vader was and the ideas the Original trilogy brought about his past and his present.

Obi Wan explains that Vader betrayed the Jedi and was seduced by the dark side. Luke says he still feels good in him(the same thing Padme says when she dies) so what could lead this Jedi to turn on his friends while also keeping a good inside him that would ultimately show itself when he redeemed himself saving Luke. Nothing in the prequels changes anything about that.

What does Anakin mainly focus on complaining about

1. The visions he has of his slave mother getting tortured and ultimately dying while the Jedi basically tell him to move on. I don't know what sort of mental state someone would have to be in to not complain or cry about watching their mom get tortured every time they go to sleep. What does Anakin do when he finds her? Well he kills the whole encampment of Sandpeople. Is that not something Vader would do?

2. His wive and possibly child dying while once again the Jedi tell him to ignore it and Jedi don't have romantic connections. This is of course after he watched the same thing happen to his mother. Once again what type of person would not get unraveled by this? What does he do to save them? He storms the jedi temple with a clone garrison kills the jedi there, then goes and kills the Separatist leaders.

Does he complain about a few needless things in AotC? Sure but people way overblow the whiny Anakin angle, and to say it somehow ruins or changes anything about Vader(we see Vader 19 years after RotS he has time to grow up more)

I love the prequels but i see some CONS.

Durp the reason for his fall to the dark side was not that bad, it's just his personality was, oh my God

I'm okay with the prequels...they are big and goofy...NOT to be taken seriously.  Some stuff happens. Spaceships. Explosions. Stuff. The end. Just like the original Buck Roger/Flash Gordon serials from the 20th century.

I'm more interested in what the fans would have done with their own version of the prequels.

I'd like to have 1,000 SW fans write their version of Episode 1 and submit them for a contest.

^I'm ok with them, but they have problems

You said he was whiny with mother issues and that somehow ruins Vader, but as I pointed out the 2 things he mainly talks about in the two movies he's an adult are legit points about struggles or conflicts ANYONE would "whine" about.

The acting and directing for him are pretty bad, the problem with the prequels isn't the things you listed IMO, it's that 90% of the cast is monotone, or badly acted and Lucas surrounded himself with so many yes men that didn't tell him how ridiculous some of his ideas were. Lucas makes worlds awesome, he doesn't do great dialogue, this has been apparent since New Hope.

"The ability to destroy a planet is insignificant next to the powah of the Force."

"I find your lack of faith disturbing."

Not saying everything in the originals was bad dialogue-wise just it wasn't the films strongest element. You can look at the prequels and get memorable quotes too.

Obi Wan got ruined by the prequels? How?????? Even hardcore haters of the prequels seem to admit that Ewan Mcgregor NAILED the role for Obi Wan and was perfect for the role of the young jedi of Alec Guinness.  How was Obi Wan ruined? I'm actually legitimately curious how you see that character out of any.

Same with Yoda, what about him was changed, or ruined? In fact it kind of shows why Yoda is the way he is like believing Vader can't be redeemed, or following the old code when with Luke like saying he's too old. Yoda is the old time jedi for both the good and bad aspects, it's this fact that makes him flawed and much more interesting to follow.

Boba Fett never had a character to ruin. He just looked cool. Jango was the exact same except he actually does things like battling Obi Wan throughout the second part of AotC.

^Obi-Wan had all those damn one-liners.

In Empire, Yoda tells Luke "A Jedi uses the Force for defense."

And then, in AOTC, he deflects Dooku's Force lightning back at him

All those 1 liners? I can think of a few, but to me dropping a few 1 liners doesn't "ruin" a character especially when the mannerisms and actions are so on point .

Yes he deflected lightning that was being shot at him back. He never went Martin Luther King Jr. and said no violence, just that Jedi don't go seeking violence they only defend, and there was a wounded Obi Wan and unconscious Anakin sitting near Dooku that needed defending

Boba was pretty pointless from the get go, he was never meant to gain the popularity he did, then when that happened people wanted more of him, so he got shoehorned into the movie.

^Yep.  That's fanservice right there for ya.

I blame the audience for that, not Lucas.

^Blame Lucas for satisfying them

Ever stop and think that Lucas did indeed create all of this? I mean the man deserves some respect.

So you're saying Lucas should have ignored the fans?

^No, just the annoying Boba fans

That's your opinion, Boba got more character in the prequels than he ever did in the OT though and there's really no arguing that.

SasquaDash started a new discussion: I'm Sorry, I Had To Do It... on the Jurassic World 3 forum
More Activity