The location is planet Zaoul, home of an extraterrestrial humanoid species, as they struggle in a self-created war against their own mechanized army. In this cataclysmic scenario we follow a member of the R'ha (which translates to Superior Warrior), the trained and specialized army of Zaoul, on his personal journey to gather and rescue survivors of the initial attack to lead them to safety. But the machines are insidious.

This is a rough synopsis of what is quickly becoming one of the world's most captivating science fiction fan films. Created by German film enthusiast Kaleb Lechowski and originally released in 2013 as a short film, R'ha took the internet by storm, catching the attention of some big names in Hollywood. Three years later, Kaleb and voice actor Dave Masterson are looking to take their vision of R'ha to the next level.

Here's the original short film from 2013:

As you can see, the quality of this fan film is on par with many of the Hollywood blockbusters today. R'ha also promotes a very profound message, that artificial intelligence is a dangerous concept to toy with. Echoed in other sci-fi classics such as The Terminator and The Matrix, R'ha offers a unique new perspective, one of an Alien species instead of a Human one. It would certainly make sense that an advanced Alien race capable of interstellar travel would harness the ability to manipulate and create various forms of mechanized intelligence to aid their efforts and (in this case) to aid in combat. However, like the other classics which came before it, machines realize they can survive without the use of its creators and attempt to eradicate them for their own protection. After having much success and receiving much acclaim online following the release of R'ha the short film, Lechowski was approached by various Hollywood studios, who wished to purchase the rights to his film and eventually turn the project into a feature-length movie. Unfortunately, it seemed the project would remain in development hell during the negotiation process and so, Kaleb has decided to start up a Kickstarter campaign in an attempt to raise enough money to film, produce and release a full, feature-length version of R'ha. 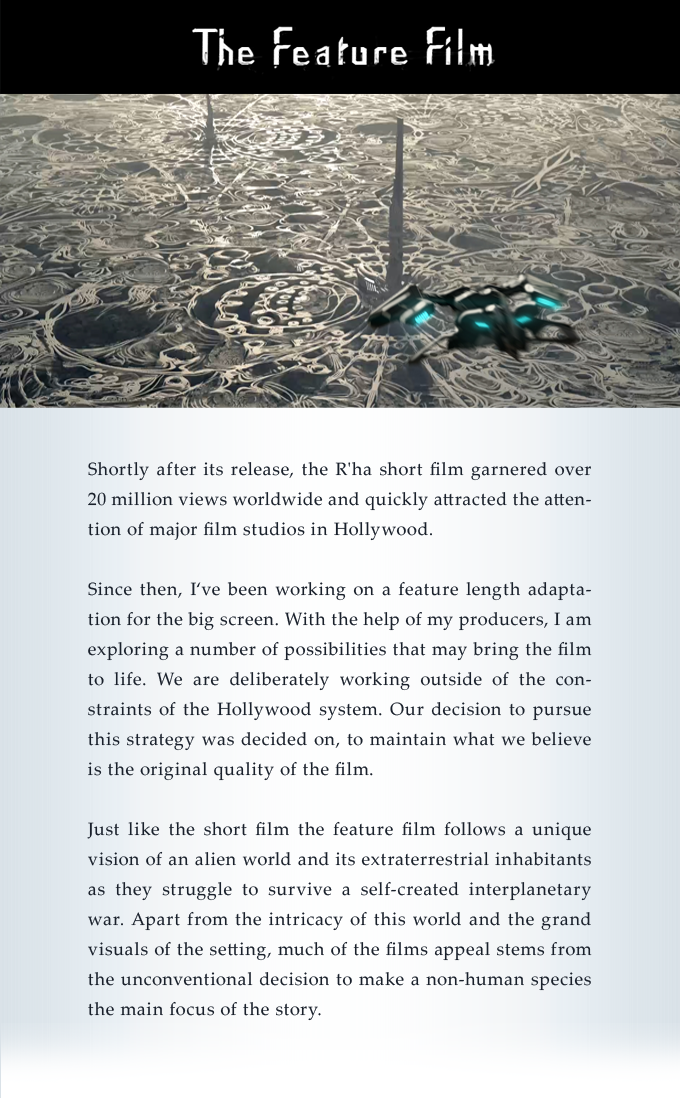 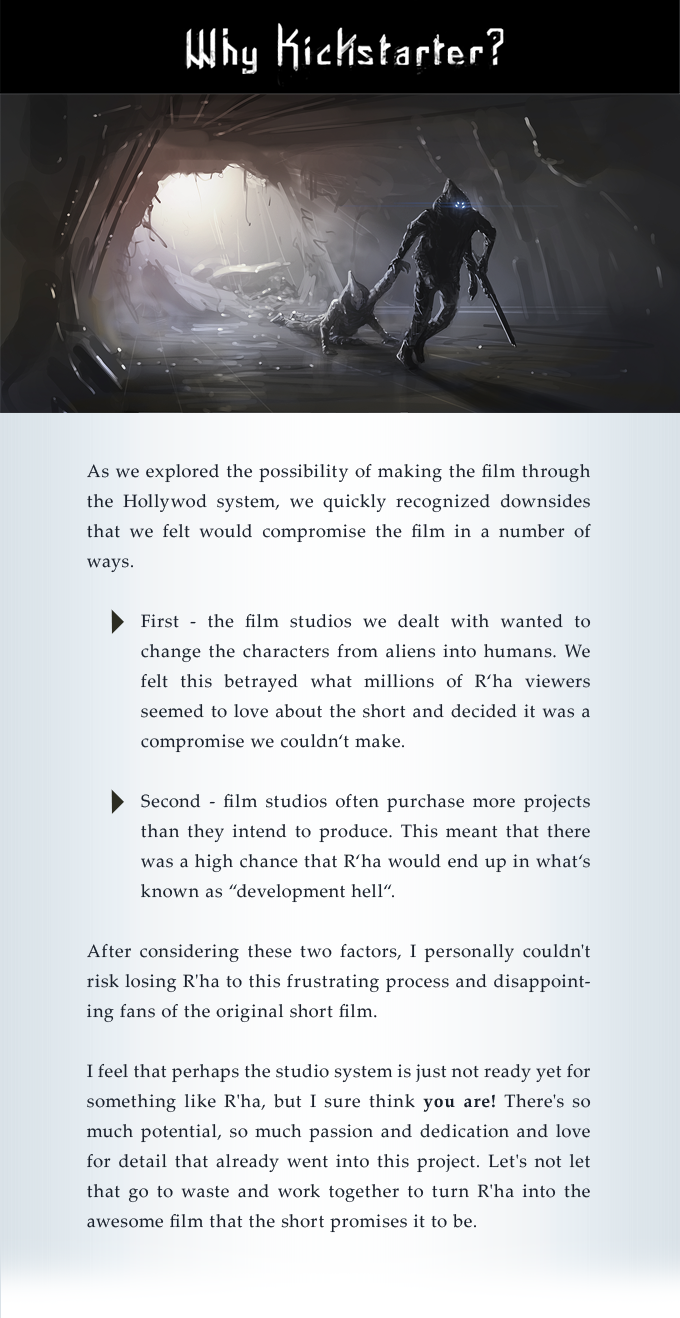 The Kickstarter campaign for R'ha is currently seeking 40,000 Euros (roughly $46,000.00 US). The film has already achieved over half of its projected budget from over 500 backers!

As huge fans of science fiction and film, we are hoping R'ha can make their goal and that this film is given a much-needed feature length release. The potential for a property like this could spawn a whole new fan base and grow into something monumental.

The folks behind this project are passionate and determined to see this film through and we ask that you help support their cause! If you're unable to pledge any funds towards the venture, at least share their Facebook page, their Kickstarter campaign and let your friends know about it! If you do decide to pledge funds however, here's a list of the perks you can expect to be rewarded with:

As new details, artwork and stills are released for R'ha we'll be sure to keep you posted. We hope you can help support this project by any means. Feel free to let us know what you think of this project in the comments section and don't forget to like R'ha on Facebook! I am a backer and I'm really relieved to see them reach their first stretch goal. What convinced me to support the project, is the fact that we will be getting a gritty hollywood-independent quality scifi movie.