After recent word of the next Ultra iteration, the first image of Ultraman X has quickly leaked online. The new Ultra warrior appears with an "X" color light indicator and an armored power-up form. The upgraded form stands next to what looks like an armored or Mecha-Gomora. The poster hints at a connection with spark dolls, like Ultraman Ginga, and some form of card-like power-ups.

The cards come with a subtle reminder of Tensou Sentai Gosieger's card based power-ups. Trading card games are still a pretty big in Japan; it would make sense if Tsuburaya wants to capitalize on that. It's likely the cards have something to do with using mechanized weapons based on Ultra monsters. Or they're just part of a marketing scheme on the poster and I'm looking way too far into it. 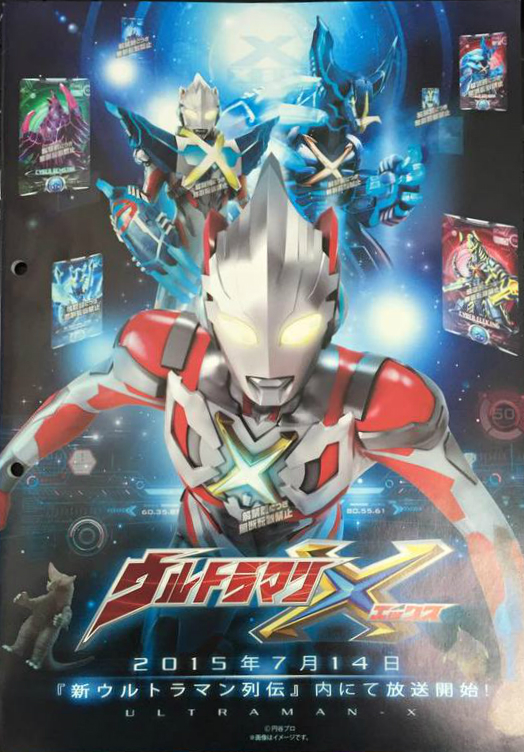 The new Ultraman image comes with an air of uncertainty. Tsuburaya's 50th Anniversary celebration of the character is just around the corner-- One wonders if the Ginga/X asthetic is the big thing rolling into next year or simply something to fill the time and keep the character in the limelight. Perhaps I'm being too pessimistic. With no information about the story or crew behind Ultraman X I could very well be looking at the next great Ultra story for all I know. (Unlikely, but lets keep all windows open.)

We won't have to speculate for long. According to the image Ultraman X premieres July 15, 2015.