The Batman Arkham games have always, for the most art at least been good value for money. Not ony are the games highly polished with plenty of content and extras to find, the DLC have usually been bite size additions to the main game, prsented and packaged in the same high quality fashion of the main games themselves. While it does feel somewhat explotative that Rockstead are announcing DLC before the gme has even been released, it does show that they are confident enough in their products sellability to announce said DLC, the Harley Quinn Pre-Order DLC. 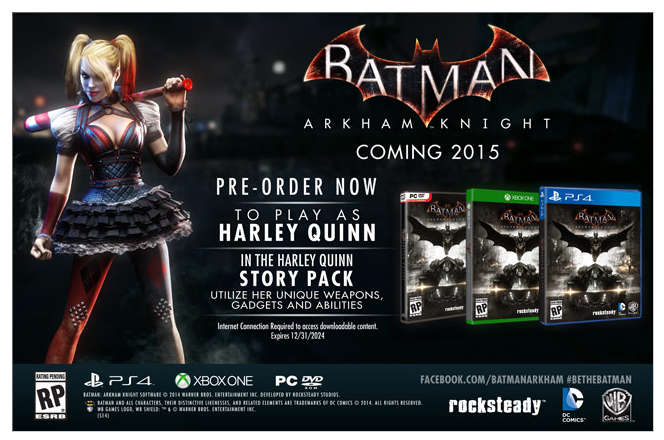 Unlike most pre-order DLC's, which usually consist of a few skins for the player, or a few maps to play the game within; it looks like Harley Quinns pre-order DLC for Batman: Arkham Knight will include not just a bunde of 4 challenge mode maps, with Harley playabe within challenge mode, but also, it seems, an additional story mode element presumably with the player controlling harley - much like Arkham City's catwoman DLC. Thankfully, it seems as though this DLC is available to all that pre-order the game, and is not an exclusive from a particular retailer.