Adaptations are a tricky thing no matter how they're done. It's easy to rant about how justified some adaptations are over others, but that's not something I'm really interested in here. The fact is director Shinji Higuchi's Attack on Titan is a deviation from the source material and whether or not that's a terrible thing depends on how bias you are for the original manga/anime or how strong your belief is that all adaptations must be carbon copies.

It seems the Spielberg-ian days of adapting Jaws and Jurassic Park into atmospherically different stories with massive character changes are all but gone. In their place is Harry Potter and The Hunger Games's dedication to accuracy with condensing. Now and then, movies like X-Men: Days of Future Past tend to work despite only using the very basic premise of its codex counterpart. It's an exception, not a rule.

I'm not here to tell the masses that Attack on Titan is a misunderstood gem equal to Jaws, Jurassic Park or even X-Men: Days of Future Past. The film has its own set of problems that make it understandably inferior to those films. Declaration is best saved for the fact that deviation from source material is least of the movie's problems. In fact if Attack on Titan exercised more exploration into its divergence it could have been an improvement. Instead it trudges along with issues mostly regarding, but not limited to, a massive lack of character logic.

It is at the risk of a black mark that I say the anime adaptation of Attack on Titan's characters is not a blueprint for fine character growth. In fact if there's anything fans of the material need to be upset about it's how comfortably the film ousted main characters like Armin as nothing more than glorified supporting roles. Armin's film counterpart actually has more going on than his anime predecessor, yet he still works just as well in condensed fashion.

Eren, in the meantime, is an interesting case of under-explored motivation mixed with more maturity. The anime features a rage filled Eren that borders Neon Genesis Evangelion's level of migraine inducing pubescent mania. The film's version carries a more durable set of balls, being older, a better fighter and smarter about his desires and how to convey them. Sure, he still gets into it with Jean, but the rivalry is simplified with Eren as the undisputed philosophical victor. This is because Eren comes off as a more sophisticated character and the change is welcomed-- At least to a point...

Eren's reason for joining the Scout Regiment is vastly different in the film. While it still makes a great deal of sense, a twist regarding Mikasa throws his entire reason for killing titans into question. Is he still out for revenge? Is he fighting just to venture outside the walls now? The revelation would spin anyone into incertitude, but when his "confusion" (Is he confused?) is explored it's played off like the television Eren once again channeling Shinji Ikari. Even worse, his initial reaction to the situation is fairly nonchalant. Why didn't he wring Mikasa for answers immediately? 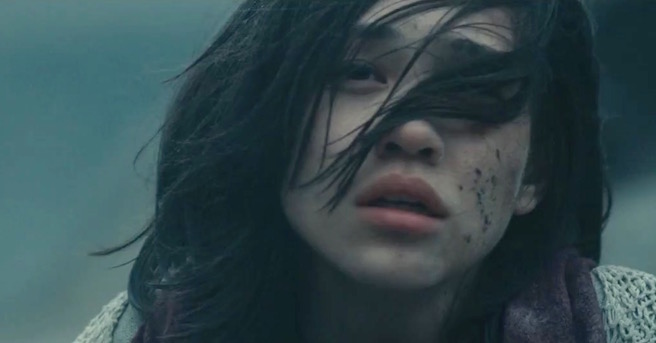 Mikasa is given a heavily altered story-arc which works well enough, but is underexploited; Eren's lack of engaging the situation is part of the blame. Instead of conflicting, sparking emotions between two troubled lovers, we're treated to some half-baked scene that gives the audience barebones exposition. It is in this same scene, however, that I realize how much better Higuchi is as a visual artist than he is as a dramatic director. Amongst dandelion seeds drifting like snow is an abandoned piano and draped furniture appropriately priming the set for a powerful moment. Unfortunately, said moment only succeeds in making Eren dislikable.

Luckily, Eren's strange departure from rationale is left to the wind once the titans attack. Granted, it's only after a fairly awkward “almost” sex-scene audiences are forced to push through, but the more steadfast Eren does return in full force. (I want to note that I understand the "lonely-soldier" relevance of the sex Eren dodged, but it came off less like a moment between Vassili and Tania in Enemy at the Gates and more like a pornographic parody on creepy, single mothers.)

The film is at its best when Higuchi is working with effects, miniature sets and monsters. Although it doesn't quite hit the bar set by 1999's Gamera 3: The Revenge of Iris, fans of the style would be hard pressed to find any Toho Godzilla movie that can compare with Katsuro Onoue's visual effects. There's a lot of compositing that isn't quite as seamless as it wants to be, but there's little doubt that the miniature integration and creature effects set a new bar for tokusatsu. 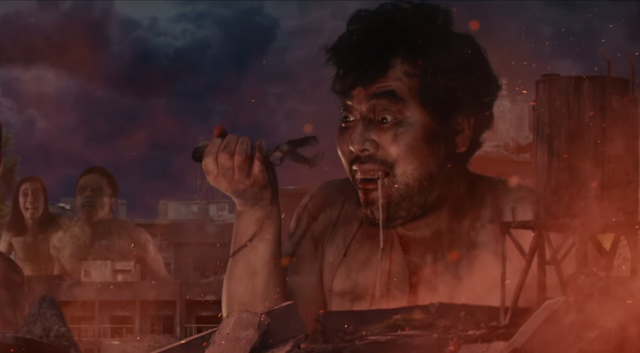 Envisioned as excitedly blood thirsty monsters, the titans themselves are wholly terrifying--A mixture of make-up and prosthetics wonderfully blended to create these gruesome antagonists. The most nightmare inducing moment comes half-way through the film as a “toddler” titan sucks on a corpse. Spotting new prey, the infant's cheeks pull apart to reveal a much larger jaw. The movie is nothing if not an ode to greater horror movie elements.

It is also at this point in the movie that the sets become noticeably in tune with the film's world building. This version dispenses with the European look of a pre-digital era and places it firmly in a post-apocalyptic setting of the modern world. Using that to its advantage, abandoned modern structures crumbled to their underground pipelines carry a more relatable sense of a time long lost. Production designer Takeshi Shimizu deserves a lot of credit for the film's outstanding set work.

A surprisingly successful effect is the omni-directional gear in action. The gas powered devices propel characters between weathered miniatures at high speeds and the best compositing was thankfully saved for these scenes. Mikasa and Shikishima (the perplexingly malevolent Levi surrogate) enjoy the best of these sequences. Unfortunately the nape slicing isn't always up to par, but largely forgivable considering the fast pace of these difficult shots.

Undoubtedly, the movie's tour de force is the finale featuring the “Rogue Titan” trashing a host of other monsters amongst a beautifully lit miniature set. Higuchi always seems to be at his best during these scenarios and Onoue is on point with him. The battle is wonderfully orchestrated around characters marveling at the mayhem. It's a climax worth waiting for and easily the most engrossing piece of the film. The Rogue Titan gives fans (who are willing to chance the movie) exactly what they expect out of him.

Unfortunately, it's also one of the few moments that live up to something in the vein of fan expectation. When it comes to perfectly depicting the source material Attack on Titan admittedly falls flat. The basic essence is there, but that's not enough for patrons of the manga/anime. And although the character changes have just as many flaws as the original story, it simply opens the door for fan revolt.

Still, the movie isn't the bottom feeder some will have you believe. It's heavily problematic with just enough redeeming qualities to be enjoyable. A lot of daikaiju fans tend to forgive, and even love, the 1990s and 2000s Godzilla films based on that exact same criteria. Likewise, Attack on Titan can be admired and enjoyed for some truly glowing achievements while understanding it's not nearly the film it could have been. 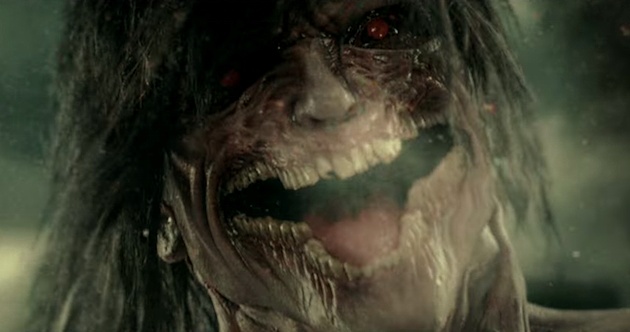 I thought the movie was actually pretty good. While there were things I say could have been different/better (mostly because Eren and Mikasa are my OTP and in all honeslty they could have been presented to us better in the film.), it was a decent film. My only complaints are the scene with the infamous Smiling Titan, Mikasa hating Eren for "abandoning her" (Wasn't his fault he got stuck in a church), the interaction between Mikasa and not-Levi (again, OTP reasons) and that creepy Baby Titan. But the moment with the Rogue Titan made up for it. They had him do stuff I've wanted to see him do in the manga/anime, such as biting the Titan's necks as he slaughtered them. Just because it strayed from the source material, doesn't mean it's bad. This one just needs a little improvement. Also you spelled Armin wrong. It's "in" not "en."

Thanks for the spelling catch.

Did anyone else notice that the same Titan that eats Eren before he bursts out of it is the Baby Titan?

GMAN2887 - How excellent! You know, your close look at and break down of Attack on Titan has actually helped me decide to go ahead and view it? The way in which you have described the various elements - good and bad - make it quite obvious that the film is worth a go! I have seen the original animated version of Attack on Titan, however, I am not so slavishly attached to it continuity that I am not willing to watch an adaptation of its events. Additionally, I must say that your article was very engaging and fun to read! :)