Star Wars: The Force Awakens is the seventh movie in the saga and the first movie in a third trilogy of films. While the movie can be reviewed in our movie database I am curious to see how each of you would list the movies from best to worst, in your own opinion of course.

Revenge of the Sith, New Hope, The Force Awakens

Attack of the Clones.

A Splash From The Past: U.S.S. MIDWAY (Now/Then)

A kind of thing I don't mind revisiting. Ridley Scott was certainly right-on with his assessment; in that TFA was going to be a juggernaut. A fan-pleaser without a doubt; although, just the same, I could nitpick a bit, too. Maybe best ride-the-wave and enjoy it for what it is; rather than knock it for what it isn't.

You can click-thru the graphics (below) and with this TOP-4: see my comments for each one in 'Opening Crawl' format. If you'd like to try it yourself: STARWORDZ. And simply paste the full address into the link-box here to replicate what I've done. 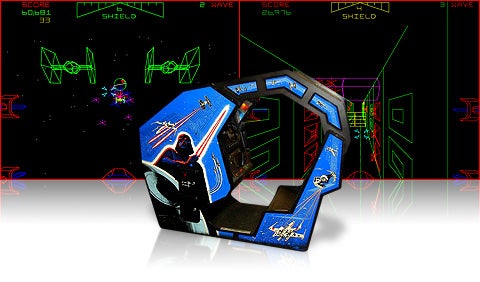 The prequels were a painful journey. It started-off too kid-centric and oddly led to it's dark finish. However, I thought the prequel trilogy improved (or was more to like) as it went along. No click-thru, just the list:

In hindsight, the Special Editions of the OT were a big warning-sign that George had gone out-of-tune. I don't believe the SE were very tastefully done. In fact, I feel they were more so butchered; opposed to drastically improved. "Blade Runner: The Final Cut" is a perfect example of the right-way to upgrade a beloved classic. I would like the original versions of the OT to 'always remain available' for future Home Video formats, too. The Empire Strikes Back

Revenge of the Sith/ Empire Strikes Back

(Yes I rated Force Awakens with Phantom Menace, personally are the two worst in the series.)

@GorillaGodzilla: Why do you hate TFA?

How is Revenge of the Sith better than A New Hope?  0_o

Darth JPSpinoRexy65: I see what you mean. I think that A New Hope is better because they use more practical effects and the characters are better. Sure some of A New Hope looks dated now but I think that it is better than the prequels in general.

I put them on about even. Depending on the day one might be marginally ahead of another but that changes upon each rewatch.

As a general moviegoer I think New Hope is pretty much superior due to being easier to follow, along with overall more likable and better characters however I think since Ian McDiarmid gets a bigger role in Revenge of the Sith, and Ewan McGregor continues his great work Episode 3 isn't as weak characterwise as the other prequels.

Essentially I'd say for a general moviegoer New Hope is superior, however for a big Star Wars fan that's willing to look at all the small hints and subtle changes that show not just the fall of Anakin, but possibly a slight change to the jedi as a whole and Palpatine's rise to power I can see the idea behind preferring Episode 3.

It also had so much it had to take care of due to all the meandering the other two prequels did and had most of the set up for the legendary trilogy that followed up chronologically thrust on its shoulders gets it some pity points for me.

A new hope, Empire strikes back & Return of the jedi.

Attack of the Clones/The Force Awakens

Hard...Not necessarily how good I think they are...But how much I like them.

I going to watch EP VII properly over the week end.  Admittedly the copy I watched wasn't 'all that' quality wise.  Couldn't make it the cinema so a friend had a copy of it.  That's why I didn't add it to the list :)

1. Revenge of the Sith

4. Attack of the Clones

10. Force Awakens: I'm sorry but it didn't feel like a Star Wars movie to me, felt more like J. J. Abram's Star Trek. Most of the plot and characters were just... awful.

Example 1: A Storm Trooper trained to be a Storm Trooper practically from Birth suddenly grows a conscious. Despite shown firing his blaster in the beginning of the movie, acts like he didn't kill any innocent civilians yet has no qualms killing his former comrades he grew up with.

Example 2: Anakin's/Luke's Blue Lightsaber being recovered, didn't that think fall out of the exhaust vents from cloud city? As in plummeted towards the core of the gas giant?

Example 3: Why was this a recreation of A New Hope? Does J J Abrams not have an imagination, its like Star Trek: Into Darkness all over again.

Example 4: Rey's suddenly learning all of the disciplines of the force without any sort of Jedi training!

Example 5: Kylo Ren telling the Poe to kneel and then crouches to eye level with said person. He might as well just allowed the man to stand up. When your told to kneel its supposed to enforce the who commanded it to show his superiority, crouching to eye level with Poe enforces that him and Poe are equals; so good going Kylo Ren for being an ineffective Villian.

Example 6: Han Solo's cliche death sequence. Come on Kylo Ren was delivering some very vague and cliche lines that Villians always spew out just before killing someone who tries to bring them back. Also the whole lighting during said sequence felt like it was ripped from a comic book, Han Solo's background light was blue and white while Kylo Ren's background light was Black and red, symbolizing the light side and the dark side then Han's light side lighting gets consumed by Kylo Ren's dark side lighting shortly before killing him.

Those are some weird choices, JPC.

Revenge of the Sith: overrated movie, should be with the other prequels

Attack of the Clones: you do realize this is terrible?/The Force Awakens: I agree

Empire Strikes Back: What?  How is this only third?  It's the best one!

Return of the Jedi: Too good to be this low./A New Hope: Same comment as ROTJ/Phantom Menace: This makes sense

Force Awakens shouldn't even be on this list, Its worse than Phantom Menace.

^No, and Attack of the Clones is worse than both.  Personally for me Revenge of the Sith is overrated, just like Jurassic World.  Not that they're bad.

Most people rate all of the prequels bad, ROTS is underrated if anything.

ROTS is very, very good. It shouldn't be undermined like the other prequels, it is on the level of the OT.

^It's a mediocre movie IMO.  Definitely better than the other 2 prequels, both of which were painful shit to sit through.  But it doesn't get close to ANH, ESB, and ROTJ.

I grew up with prequels so I enjoy them subjectively and I think that they have a lot more positive points than they are given credit for. Force Awakens is only so high because of the characters. When I first saw it, I loved it, but it was really low on the list. But Star Wars is wonderful (in some capacity at least) no matter what episode I am watching haha

This thread seems to have changed from favorite star wars movie to If the prequel trilogy(particularly ROTS) have merit.

@xeno_alpha_07: Lucas, being a fucking idiot, made the original, clean versions of ANH, ESB, and ROTJ unavailable to make us put up with the special edition bullshit versions

@Durp004: ROTS can or can't have merit; it all comes down to the individual.  I respect that opinion as long as it's reasonable.

I'm going to update mine once I see Rogue One

Here is my updated one, as promised:

I have problems with Rogue One, but overall I liked it. At bare minimum it was nice to walk away from a Star Wars prequel that didn't suck.