"We are officially back,” is what Legacy Effects front-man John Rosengrant had to say about joining the crew of Terminator: Genesisis. Legacy Effects is a FX company ran and led by Rosengrant, whom has not only worked on all previous four instalments of the Terminator franchise, but also learnt under the tutorage of the late, great Stan Winston. With this news that he and his company will be handling the Terminators for the frowned upon psuedo reboot, and will even be designing new machines for the movie, some fans can relax a little. Speaking to the Arnold Fans, Rosengrant had this to say about his experiences working on the first movie...

“I sort of had my hands in everything when I first started working for Stan,” begins Rosengrant. “Running appliances and there are two things that I had done on that movie that were quick and interesting things that were featured in the film. Like when Arnold cuts his eyeball out and throws the eye skin in the sink. I called the shop and told them that they were going to shoot and we had to come up with something really quickly. I started making these skins that Arnold could throw into the sink.” 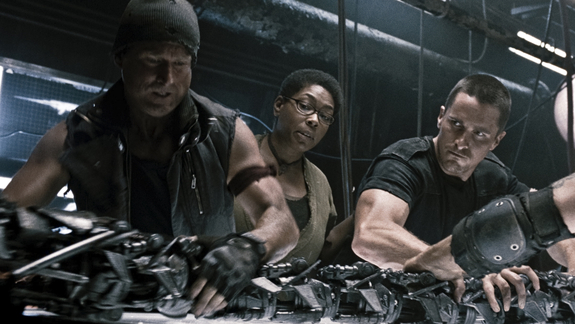 Rosengrant also scored a cameo in Salvation, there on the left!

However, Jeff Dawn, who was the lead make-up artist on the first 3 instalments will not be returning for the reboot - apparently he's happy on his current projects. Take from that what you will.

0 Fan responses to Legacy Effects To Return For Terminator Genesis!