As is the fashion these days with micro-transactions, launch day DLC's and store specific pre-order bonuses, American store chain Walmart have revealed the pre-order bonus they will be providing free to customers whom pre-order the game through them - a prototype Batmobile, which looks much like the standard in-game vehicle, but with a silvery chrome finish, though allegedly the vehicle will have "exclusive gameplay features" that have yet to be announced. As is usual with pre-order bonuses, this prototype Batmobile comes in addition to the Harley Quinn pre-order bonus that allows players to play as the villain, along with 4 additional challenge maps, mostlikely designed to reflect the character. Expect more news from other retailers of their own store-exclusive pre-order bonuses for the game before its October 14th release date. 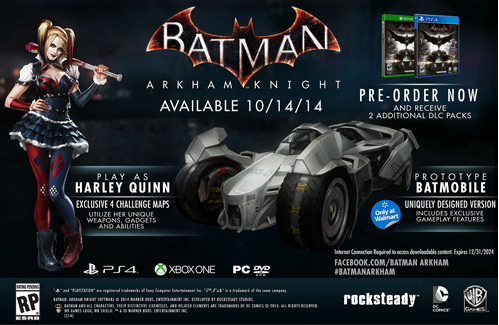