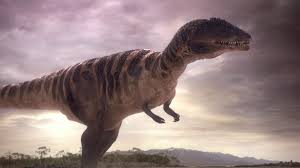 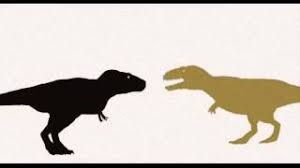 Siats walks near a river and proceeds to get a drink, while drinking he hears a loud roar in the forest, Siatsturns around standing his ground, anger goes into his eyes, what he sees is a ouranosaurus running, Siats already ate and turns to keep drinking, he feels vibrations going fast and sees a shadow in the forest chasing the ouranosaurus, a female Carcharodontosaurus catches the ouranosaurus and growls at Siats. Siats charges at Carchar and roars at her, Carchar charges and rams Siats in the stomach, Siats backs off and gets a breather after that hit to the stomach. He roars at Carchar and charges again and bites Carchar's side, Carchar snaps at Siats and shakes him off, he twists his body and bites Siats neck and pulling backwords cutting Siats neck veins, Siats looks at Carchar and walks off, Carchar sees an opening and walks after Siats, with Siats head down and blood dripping down his face, Carchar charges and bites the Siats neck again and holds on to his neck, after 10 seconds Siats dies from blood loss, Carchar drops Siats body and roars in victory, he then drags Siats next to the dead ouranosaurus he hunted earlier and begins the huge feast of a life time, this will satisfy the carcharodontosaurus for 6 days.

Carchar was the larger fighter and had sharper teeth which means he could bite the Siats cutting his veins and could out think Siats. But who do you think would win?

5 Responses to Siats vs Carcharodontosaurus

Thanks for using my suggestion man! I agree that Carchara would win usually. Awesome fight as always!

yes, Carchar did have the advantage of being more intelligent, After the huge loss against Tyrannosaurus Rex he can defeat smaller opponents that arent smarter or have a stronger bite force.