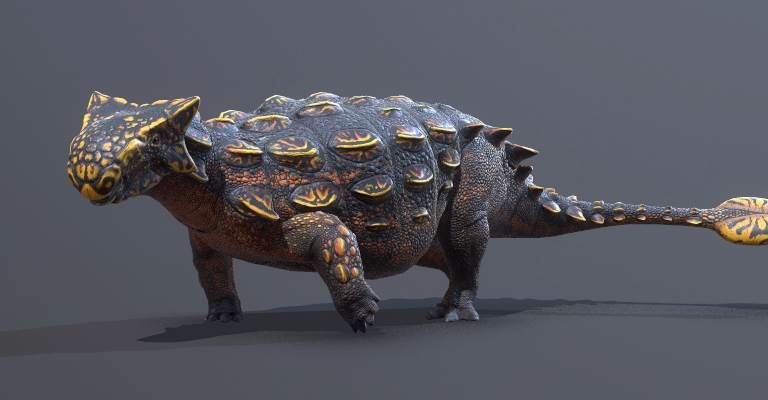 The first dinosaur on my list is a majestic, armoured tank from the Late Cretaceous, that lived at the same place and time as Tyrannosaurus rex. With Ankylosaurus being a living tank, it most certainly could hold its own against the tyrant king. I was always fond of it as a child, and it used to be my favourite herbivore. As a kid, this dinosaur used to be my second-favourite, but has dropped quite a bit. By no means do I dislike Giganotosaurus, I just like some dinosaurs more. It was a sauropod hunter, preying on the likes of Andesaurus and Argentinosaurus.

Carcharodontosaurus is almost the same animals as Giganotosaurus, but it's slightly bigger. It also lived in a more dangerous environment with other predators. It was most likely the apex predator in its environment, hunting down herds of Ouranosaurus and Paralititan.

As a kid, I always thought that Allosaurus was the top predator of Late Jurassic North America. But then, I discover this bad boy--the lizard-eating master itself, Saurophaganax maximus. It's basically an A.fragilis on steroids, with some estimates putting it at longer lengths than T.rex.

Dakotaraptor is pretty much the Jurassic Park Velociraptor in real life. It's the same size, but unlike V.mongoliensis, it actually lived with T.rex. As someone who grew up with the JP series, I instantly fell in love with this dinosaur. It is my favourite dinosaur discovered in 2015, making it a relatively recent find. Outside of Jurassic Park and King Kong, my favourite dinosaur movie was Disney's Dinosaur, the main villain of which was Carnotaurus. It was a badass through and through, even though the real life version was vastly different. It wasn't a T.rex-sized monster; it was a smaller, Allosaurus-sized speedster, the Cheetah of the Cretaceous. I love this dinosaur and can't wait to see it in Jurassic World: Fallen Kingdom. Dakotaraptor may have been a big Dromaeosaurid, but Utahraptor was even bigger. It was also more heavily built and designed for combat. I also love it for its fight with Gastonia, where it was forced to fight the herbivore to avoid starvation. Despite being killed, it mortally wounded its foe, which later died. This always fascinated me, since it was able to take down a dinosaur that was essentially a walking tank. At third place is one of the classics, Triceratops. What can I really say about this dinosaur? It's beautiful, majestic, and even cute. I have fond childhood memories of this creature, often pondering whether it or T.rex would win a fight. Triceratops has a lot going for it, like its frill, which acts as a shield, and of course, its three horns. I was debating whether to include this dinosaur or Torosaurus, but the Trike won out because it was better suited for fighting, and it's more classic.

Oh, boi. I've had quite a history with this dinosaur. I initally disliked it for its poor portrayal in JPIII, with its inconsistent strength. But when I found out about its real-life counterpart, I warmed up to it. It was a beautiful, peaceful piscivore, with a sleek and streamlined body style. I recently came to appreciate the JPIII Spinosaurus because of its backstory as an illegal creation that was similar to an invasive species. Whether it's the JPIII version or the real thing, I still love Spinosaurus aegyptiacus.

Was there every any doubt about which dinosaur would top my list? Probably not. So why is this dinky-armed (I am fully aware that its arms are actually very powerful), dumb (I know it's intelligent), slow (its top speed was 25 MPH, pretty average, not overly bad) big-headed attention-whore Number 1? Because I know, based on extensive knowledge and research, that Tyrannosaurus rex, is the most powerful terrestrial predator of all time. Why? It was smarter than other megatheropods likeGiganotosaurus. It had acute senses that could allow it to find a meaty meal in the form of an unfortunateTriceratops or Edmontosaurus. It had powerful binocular vision that gave it depth perception, take thatJurassic Park (jk, you're still my favorite movie). It had ridiculous endurance and was designed to rise from whatever nature threw at it. It had the strongest bite force of any terrestrial animal, LIVING OR EXTINCT. Does that not terrify you? Why, this beast, worthy of the title of "tyrant lizard king" hunted in packs, just like its ancestors, such as Albertosaurus. So T.rex is worthy of its fame and popularity. It was also the first dinosaur I ever knew, and this was the dinosaur I primarily grew up with. Walking With Dinosaurs Episode 6 was one of the reasons I love this animal. It showed T.rex as an animal instead of a monster. And then there's When Dinosaurs Roamed America, which also helped show Tyrannosaurus as an animal. But above all, there was Jurassic Park. The movie got me into dinosaurs as a whole, and one of the key reasons was Rexy. The moment where she threw the Big One into the skeleton and roared in triumph was when I knew that this movie, and dinosaur, would be with me for life. Thank you, Rexy, for being the pinnacle of my childhood. When I was growing up, Giganotosauruswas commonly looked at as the deadliest theropod, but because of my sentimental attachment to T.rex, I stood by the tyrant lizard. And for that, Tyrannosaurus rex was, is, and forever will be my all-time favourite dinosaur, DROP THAT MIC, REXY! *queue the motherfucking T.rex song*

Very good list, rex is number one for me, Dakotaraptor is most likely second.

No evidence that suggests T.rex hunted in packs.

^I'm pretty sure that footprints of three T.rex walking next to each-other were found, and some of its relatives were found buried together.