With the Superbowl, the second trailer for the highly-anticipated Avengers: Infinity War has been released, so it's time to break it down.

The trailer begins with a shot of Iron Man, Spider-Man, and Doctor Strange in a dark area. The red glow behind them may confirm that this is the giant round object in the sky above New York, which also had a red glow. This is probably after the shot of the Iron Spider from the first trailer.

We then see Vision and Scarlet Witch in what appears to be a hotel room. It's clear that they're in a romantic relationship at this point. Wanda looks pretty concerned, which may foreshadow the attack on Vision later. 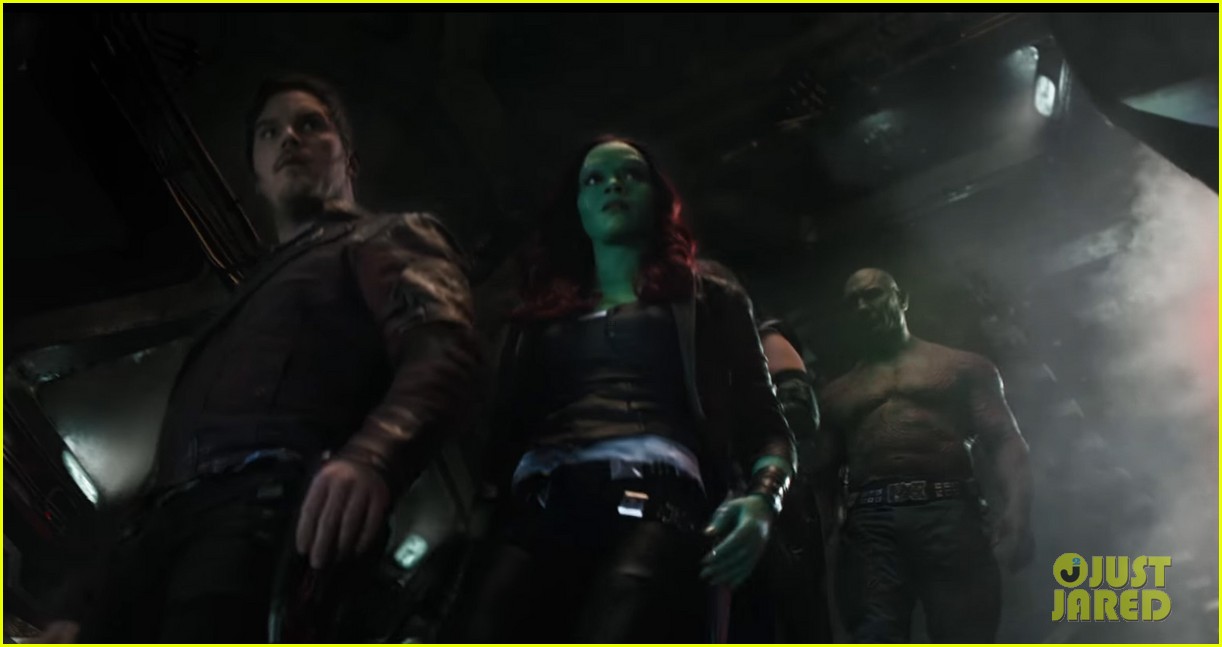 Next is a shot of Star-Lord, Gamora, Mantis, and Drax walking. I think this is in the Collector's room in Knowhere. In a leaked clip, that is where they saw Thanos interrogating the Collector for the Reality Stone.

It then cuts to a scene in the Sanctum Sanctorum, where Tony Stark tells Bruce Banner, "So this is it. It's all been leading to this." This is probably when the giant, ring-shaped object appears in the sky above NYC.

Next is a shot of Thor with Rocket Raccoon and Groot. This was also scene in the leaked footage from D23 in Summer of 2017. The scene also looks a lot like one of the leaked Lego sets for the film: 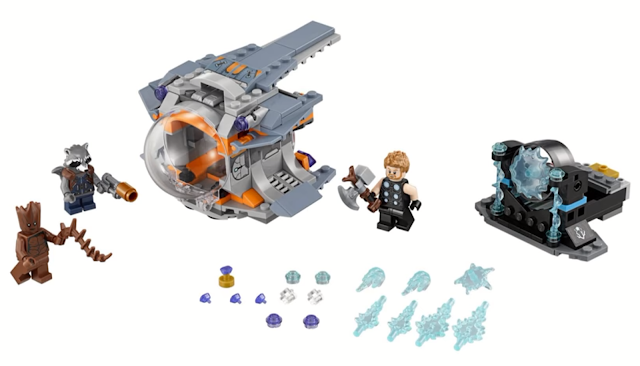 This could be when they're on their way to get a new weapon for Thor, after his ship gets destroyed by Thanos and he meets the Guardians.

Next, we see Loki. This is probably very early on in the movie, when Thanos attacks Thor and the Asgardians. It probably happens around the same time Loki gives Thanos the Tesseract. 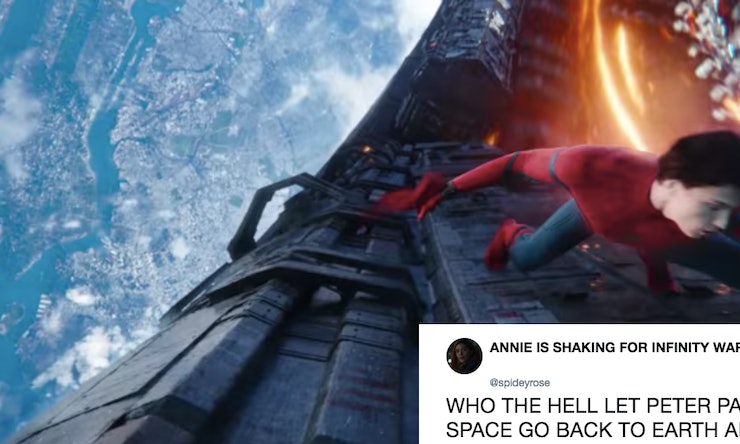 Then there's a scene of Spider-Man on the giant ring, far above the ground. I think that after the part where Peter sees the object from his bus, he'll don his classic red-and-blues and make his way over to it. However, it will be too far above the ground, and he won't be able to breathe. Tony will somehow notice this (probably by repairing the tracker in the suit) and send the Iron Spider suit to him. 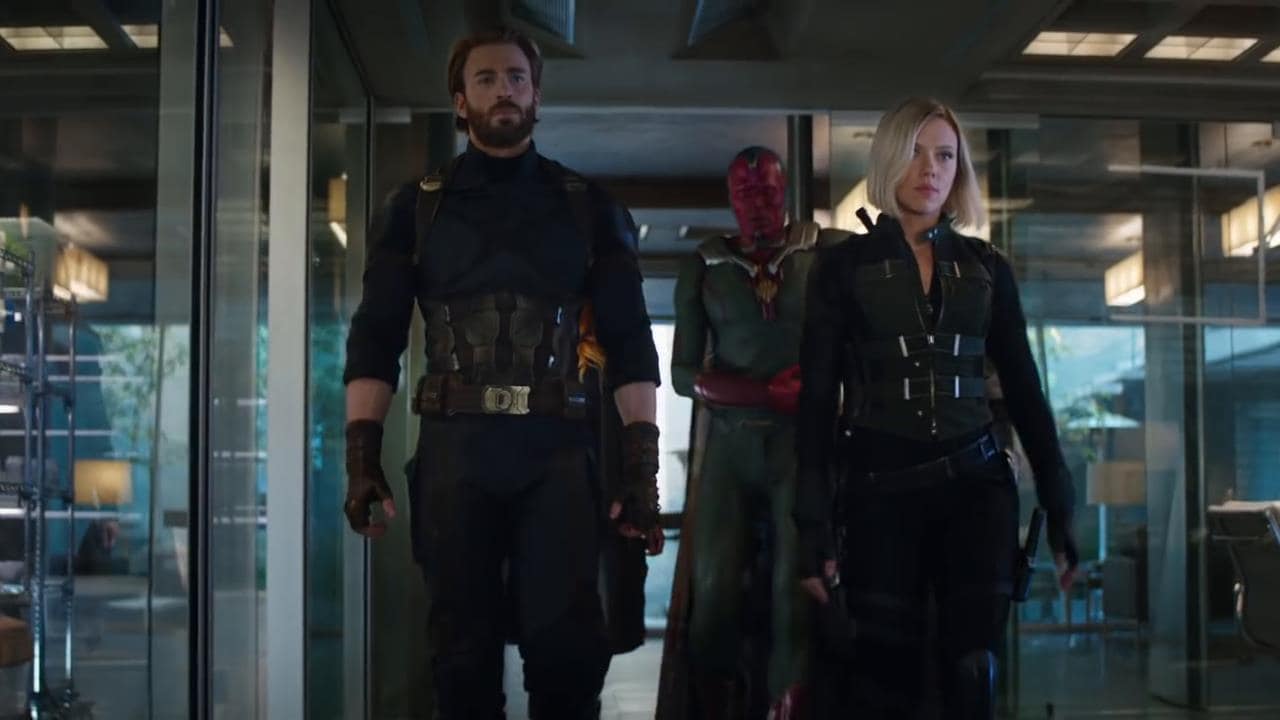 Next, we see Steve Rogers, Black Widow, and Vision. There is someone behind Steve, who is Scarlet Witch because of the black coat. Notice that Vision doesn't have the Mind Stone in his forehead, confirming that a) he can live without it, and b) he does indeed lose it. The background looks like Wakanda, and along with a leaked image of a Lego set, it confirms that Vision does somehow get here. 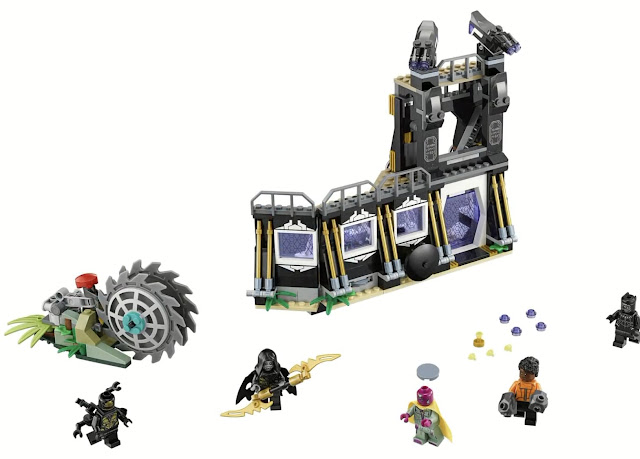 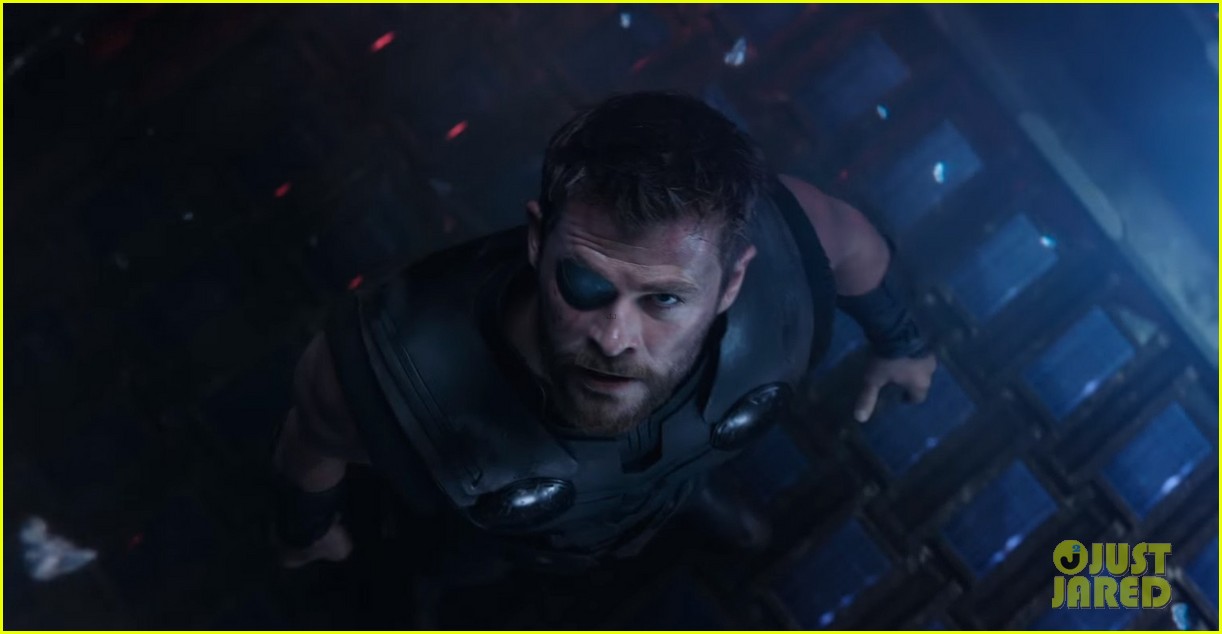 Then, Thor asks "Ready?" to who I think is the Guardians. The place he is in during this shot is dark, and it looks like it takes place in a spaceship. 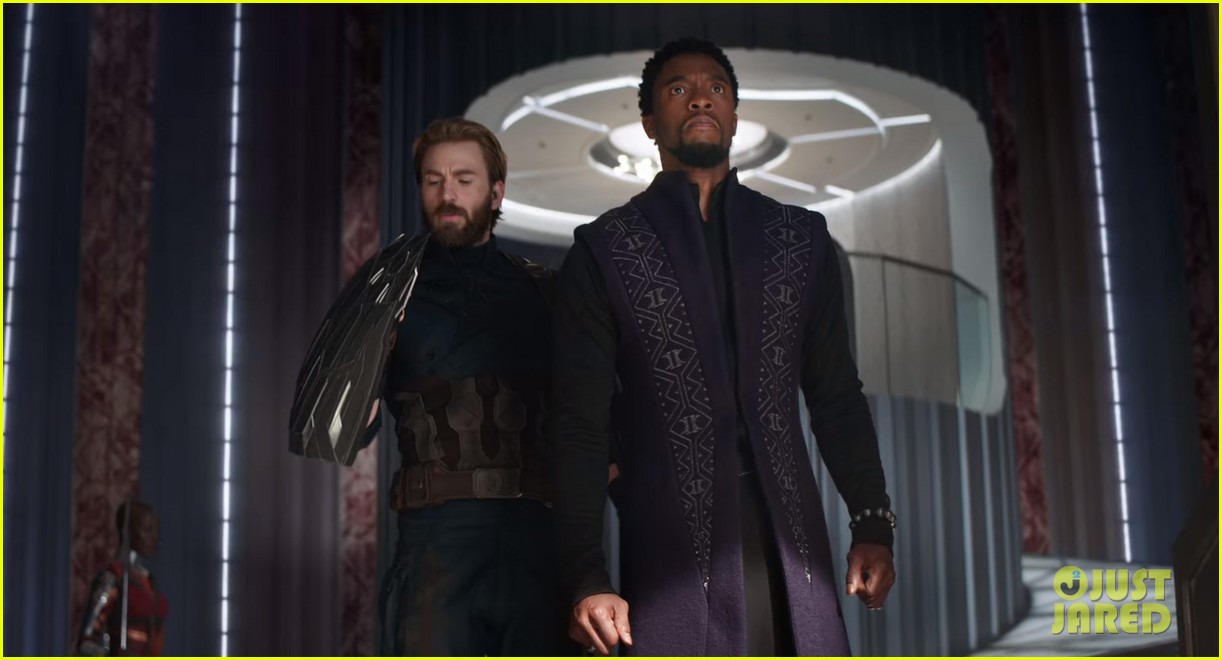 We finally see Steve get his new shield, as he says "Let's go," perfectly after Thor's line. In the first trailer, T'Challa said, "And get this man a shield," so here, we finally see him get it. The front edges of the new shield are sharp, but more on that later.

In the streets of New York, Tony Stark dons his latest Iron Man armour, the Mark 48. It forms around his body, similar to the Model Prime suit from the comics.

Then there's Teen Groot, in what appears to be some kind of building. To the right, there's a round shape that's orange around the edges. I think it's a portal from Doctor Strange, because in the D23 trailer, we saw Strange create platforms for Star-Lord as they attacked Thanos.

It then cuts to Nebula, drawing a weapon in a destroyed landscape. This could be Xandar, after Thanos gets the Power Stone. The background looks a lot like the same place where Thanos punched Iron Man in the last trailer.

We then see the same shot of the Outriders charging from the first trailer, and then after that, there's Black Widow on a Wakandan transport. This could be as she and the others who are in Wakanda are preparing for battle. 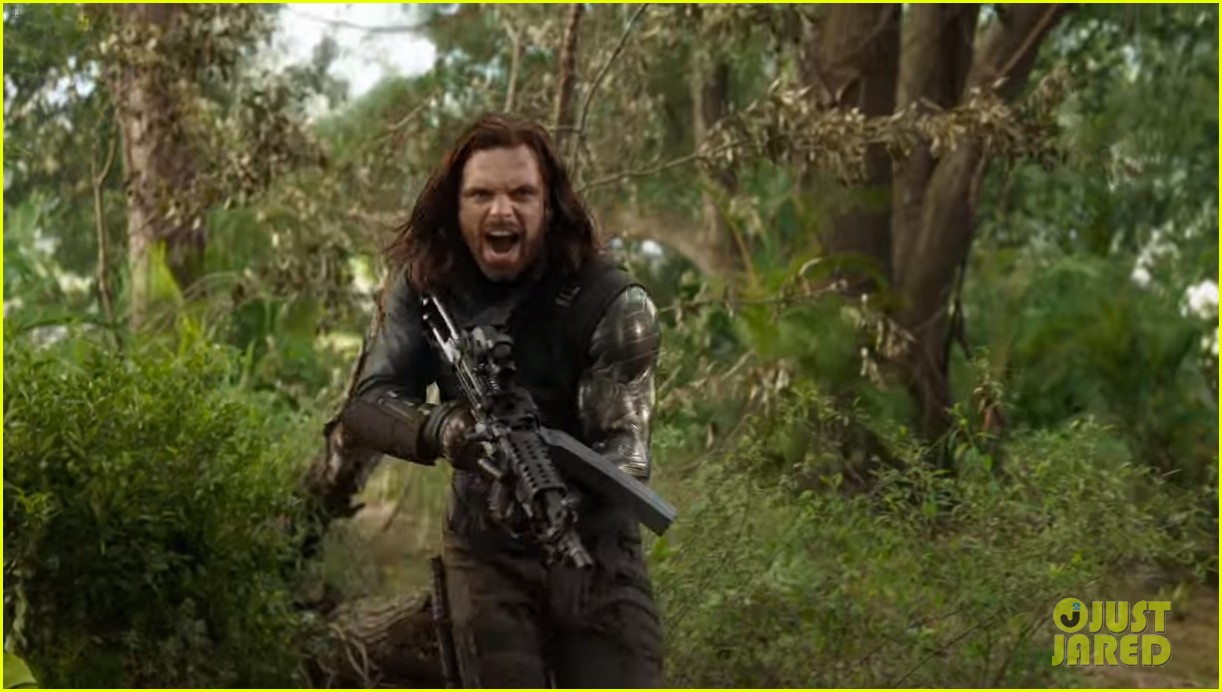 It shows Bucky holding his gun in a Wakandan forest. This is probably sometime during the Outrider invasion.

Near the end, we see Doctor Strange team up with Iron Man. The sign behind Strange is the same one seen when Tony takes off his glasses in the first trailer. I think this happens before they go to the giant ring to help Peter. 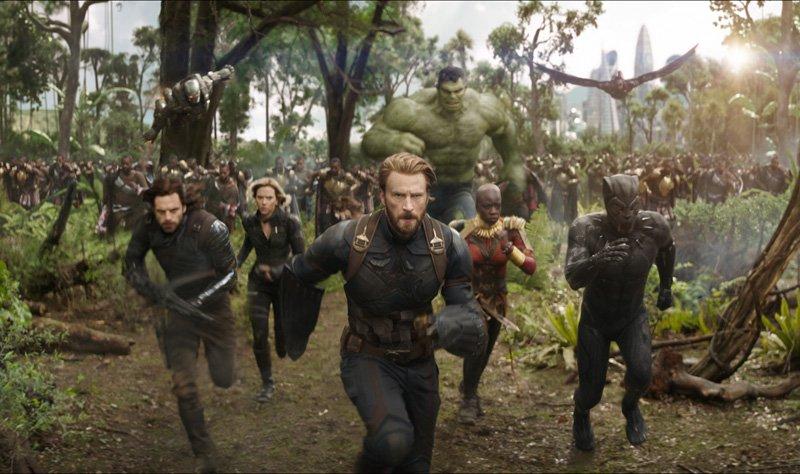 Then there's a slightly-modified version of the running shot from the end of the trailer that dropped in November. The only difference is that Captain America has his new shields on his arms. We may see more heroes in this scene during the actual movie.

After the logo shows, there's a final scene of Thanos smirking. He has scratches on his left cheek, which have probably been made by Captain America's shield.

Still wondering if Thanos is going to be defeated in this one or in Avengers 4.

^Avengers 4. Brolin is in the cast for that movie.

Monster_Zero 79% To Next Rank
Conversationalist
Support Us
Become a Supporter / Help Keep us Online!
Latest Activity

monsterzero9 replied to Mythical Creatures In The MonsterVerse.

Kattozilla replied to Mythical Creatures In The MonsterVerse.

Maxxx17 replied to My Prediction About Eleven In Stranger Things 4