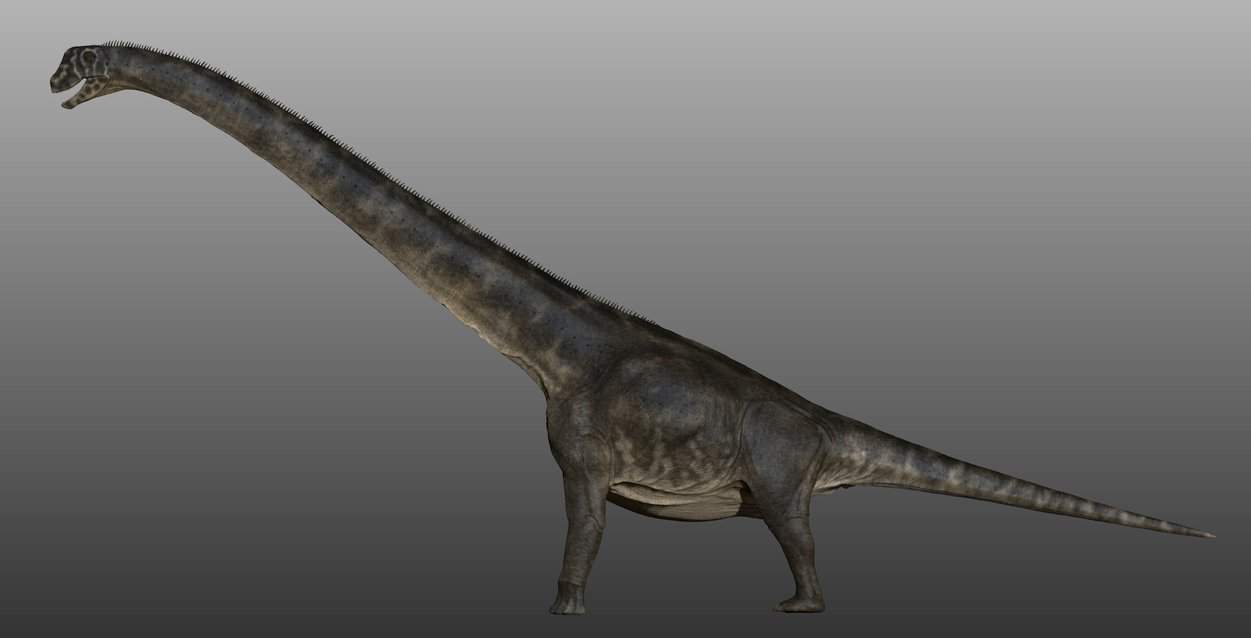 It's the tallest dinosaur in existence, and its name means earthquake god lizard. 'Nuff said.

This is due to some nostalgia. As a kid, Walking With Dinosaurs was and still is one of my favourite do***entaries. Time of the Titans centred around a female Diplodocus struggling to survive, and it was dazzling. I was amazed by this long-ass dinosaur, and then there's the fact that it can break the sound barrier by whipping its tail.

As a kid, I had no idea what the f*ck a Giraffatitan was. I loved Brachiosaurus because of its entrance in Jurassic Park. Many years later, I conduct some research and discover that G.brancai was about the same size of the JP universe's B.altithorax.

This one is a combo between nostalgia and the pure awesomeness of this animal. The Chased by Dinosaurs spin-off of Walking With Dinosaurs made me fall in love with this majestic herbivore. And then there's the fact that this thing was the largest dinosaur in existence, and I was like "Whoa! South America's carnivores are basically clones of North African theropods, but it has one thing that Africa doesn't: the largest terrestrial animal ever!"

As a kid, I would watch the scene in The Land Before Time where Sharptooth fights Littlefoot's mother. And you can only imagine how disappointed I was when I found out that Apatosaurus didn't live with T.rex. But years later, I found out that Alamosaurus lived alongside Tyrannosaurus, and I was finally happy that there would be a sauropod that lived with T.rex. Had The Land Before Time been more scientifically accurate, this would've been the main dinosaur in the movie.

I think my three favorites would be

5.  Futalognkoasaurus.  You will claim this is a surprising choice, and I agree.  This was the sauropod whose replicated fossil skeleton was too big to placed with the others in the Ulimtate Dinosaurus exhibit at the museum I went to.  This dinosaur was the very first I saw that belonged to this exhibit.  It was in a reared-up position, and I was so taken back by the sheer size of it.  It reached lengths of around 90 feet, so while it wasn't the largest of its kind, it was a spectacle to behold.

4.  Argentinosaurus.  BEAST is all that needs to be said.

3.  Apatosaurus.  This was the classic sauropod that everyone learned as a kid (even if it was called a Brontosaurus too often), and I think it was when I saw The Land Before Time when I first saw it in action.

2.  Diplodocus.  This one is based on nostalgia.  You'd think it was just from Walking With Dinosaurs, and technically you aren't far off; it was actually Allosaurus:  A Walking With Dinosaurs Special.  Yes, it's original name was Ballad of Big Al, but this combines the with scientific analysis (including interviews with animal handlers and paleontologists) of the actual Big Al specimen, even though they got the size wrong in the show.  AND I didn't even watch the Kenneth Branagh-narrated version; it was the AVERY BROOKS-narrated version, on Discovery Channel.  My grandmother taped it for me when I was 6, and I still have the VHS tape of it, so whenever I watch it, I get the rush of nostalgia from the show AND the commercials that aired on that broadcast.  And Battle of the Salt Plains is one of my favourite instrumentals from any Walking With series.

1.  Brachiosaurus.  All because of Jurassic Park.  Yes, it was actually Giraffatitan, but who cares?  It was rare to have a sauropod with that body type in media (the only other ones off the top of my head was Disney's Dinosaur, and a dino-themed episode of Corduroy Bear that I vaguely remember from TVO Kids).  Most sauropods shown had long bodies with their necks straight out, like Diplodocus and Apatosaurus, and when shown correctly, it changed how I looked at them as tall to long.

The only reason I know this is because of a game I really like and played so props to the creator who created Giraffatitan!

I visited India before, Its a really nice place to go to. Bruhathyakosaurus has been stuck in my head ever since.

I like its name, Its funny and it reminds me of Wonka Bars from Willy Wonka.

My favorite sauropod because it sounds like a RIBBON.

monsterzero9 replied to Will we make it to a thousand members on team godzilla?!

HinikunaGoji replied to Will we make it to a thousand members on team godzilla?!

Nicozilla replied to My LEGO Kiryu was featured in a magazine!

Nicozilla started a new discussion: Will we make it to a thousand members on team godzilla?! on the Godzilla Movies forum

monsterzero9 started a new discussion: the return of 100% totally legit wikipedia. on the Godzilla Movies forum