Tyrannosaurus rex and Carcharodontosaurus saharicus are the king and queen of the megatheropod kingdom. But which is superior to the other? We'll answer that question as today, we pit the tyrant lizard king against the shark-toothed lizard! 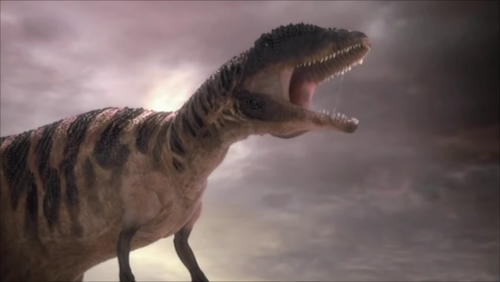 The Carcharodontosaurus sniffed the ground. He picked up the scent of a sauropod and continued on, eventually finding a clearing in the forest with a large river. There was the body of a juvenile Paralititan. He placed his foot on the dead animal and sank his teeth into its flesh, beginning to eat. His meal was interrupted by large footsteps, and he looked around.

A large male Tyrannosaurus rex entered the clearing, snarling upon the sight of another carnivore. The two megatheropods stared each other down in a face-off.

The T.rex roared loudly, and the Carc responded with his own roar.

The tyrant charged, jaws agape, but the Carc sidestepped. However, the T.rex clamped down on his opponent's leg as he moved, nearly cracking it. All knew the strength of the jaws of the infamous Tyrannosaurus rex, and all feared, and the Carcharodontosaurus was no exception. He turned around and bit the T.rex by the neck, his teeth slicing the Tyrannosaur's flesh like a knife.

This did not phase the beast, who easily pulled himself out of the Carc's grip and crushed his right arm in his jaws with ease. The Carc roared in pain as his forelimb was snapped, but that wasn't the end. His right arm was ripped clean off, leaving only a bloody stump.

The Carcharodontosaurus staggered back and looked at his foe, seeing him swallow his limb whole. This both sickened and enraged him, and he charged the rex, ramming him in the flank. The T.rex lunged at the Carc, who dodged with ease and bit his lower jaw.

The king of the dinosaurs shoved the Carc back with his heavier body, then nipped at his snout. His teeth left a small indentation on his nose, which only further angered the Carc. With his remaining arm, he slashed at the T.rex's chest, drawing blood.

The tyrant king clamped down on the Carc's unharmed leg, crushing it with ease. The shark-toothed lizard yelped and stumbled back in pain.

Knowing he likely wouldn't win this fight, he attempted to flee. As he limped away, he felt a tearing pain in his tail, and turned in horror. The tyrant lizard king wouldn't let him get away, forcing him to fight. And fight he would.

The Carcharodontosaurus bit the T.rex's small arms, then kicked him to the ground. He ripped away at his flesh with the massive talons all theropods possessed on their toes while suffocating him with a bite to the neck.

The tyrant groaned in pain before shaking his opponent off. He clambered to his feet and rammed the Carc with his large skull, pushing him back. The Carcharodontosaurus was now standing knee-deep in a river. As he was charging, a Sarcosuchus grabbed his thigh, releasing a deep, gluttural roar from him. Another Sarco bit his neck, and the first crocodilian pulled his leg off.

As his leg was ripped from his body, he collapsed into the water and was drowned. The last the Tyrannosaurus saw of him was a decapitated head in the jaws of one of the crocodiles.

Knowing that the Carcharodontosaurus would satisfy the Sarcosuchus pair, he turned to his prize and began to eat. After gorging himself, he made his way out of the clearing, leaving the sauropod to the smaller predators.

18 Responses to PDBS2F8: Tyrannosaurus vs Carcharodontosaurus

^Thanks. PDBS3 is going to be something different, but for PDBS2, we still have two more fights

Forgot to add this but T.rex also had the advantage of binocular vision

I love it bro

OF COURSE THE T-REX WILL WIN,DON'T YOU THINK THAT THE REX GETS UNLIMITED ATTENTION,LOVE,RESPECT AND POPULARITY,WHEN WILL PEOPLE CARE ABOUT THE OTHER DINOSAURS.

Heres a fact:every single new Dinosaur which the T-Rex fights is only new to the movie just to get killed or defeated by the the Rex.

I like the Rex but that is the reason why the Rex isn't my favorite Dino,also he isn't the king!

Well... Spino beat it in JP3... so it doesn't always win in movies... But you shouldn't yell at James for thinking T-rex would win.

Well, yeah, it's the most popular Dinosaur by far and I do believe it is over loved. There are cooler Dinosaurs! Not that I don't like it, it's just kinda lost that wow factor from all the overhyping. Still like it like any other Dinosaur, but as far as Tyrannosaurs go I prefer Tarbosaurus, Albertosaurus, Daspletosaurus, etc. But you shouldn't yell at people for thinking it would win in a fight, especially when it's not for the reason you mentioned. They have valid points for why it would win, while I don't think it would win the majority of fights with a Carcharodontosaurus, they're entitled to their own opinion.

Sorry guys,im not yelling at James,but im happy that the Spino killed the Rex.

Im also an Allosaurus fanboy,not a Spino,Giga or Carchar fanboy.

Then there we found the new allotar, master of none of the 4 elements. I believe one day, he'll save the world XD Avatar  references for days!

I agree, the tyrant king lizard takes the cake

Shouldn't you be siding with Carcharodontosaurus? I mean SHARK is in the name! You wouldn't be The true shark boy if you didn't side with it XD