To celebrate reaching 700 posts (although this is my 701st), I'll be pitting my favourite dinosaur against my favourite modern day animal.  Here we go... 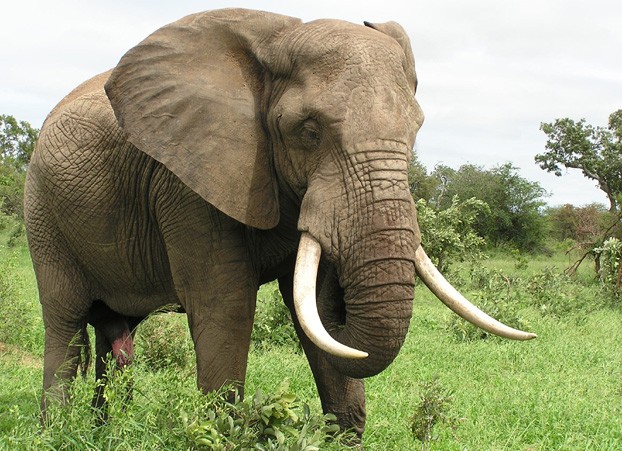 Thunderstorm led his pack through the savannah, looking for food.  The four decided to split up since a single individual of any of the animals here wouldn't be enough to feed them all.

Thunderstorm walked under the sweltering heat, looking for food.  Finally, he saw a herd of African Elephants.  He looked for a suitable target, choosing a large female.

The T.Rex moved in, charging.  He rammed her in the shoulder, catching her by surprise.  The rest of the herd fled, leaving their companion behind.  The two combatants faced each other, growling.

Thunderstorm made a mock lunge, but the elephant knew what he was trying to do.  She stood her ground, looking for an opening.  Thunderstorm got sick of waiting and decided to attack.  He clamped down on her throat, releasing a trumpet of pain from her.

She slipped out of his grasp, then rammed into him.  She grazed his ribs with one of her tusks, and hit his thigh.  Thunderstorm roared in agony as the tusk went into his thigh.  He headbutted her, forcing her back.

The elephant charged again, and the two creatures' heads collided.  They engaged in a shoving contest, with the herbivore managing to push Thunderstorm back.  He tripped on a rock, and she crashed into his side, her tusks digging into his flesh.

The T.Rex's ribs were broken, but he stood up, letting out a kingly bellow.  The elephant let out a piercing scream, and the two behemoths charged.  Thunderstorm clamped down on the herbivore's throat, who scraped his shoulder.

He released, shoving her back.  She sank her tusk into his knee, making him fall to the ground.

He was in too much pain to stand up.  The elephant prepared to stomp on his skull, but he caught her leg, making her fall.  Both of them were on the ground now.

The T.Rex recovered faster, getting to his feet.  He placed his foot on the elephant's shoulder, biting her neck.  His toe claws dug into her flesh, making her bleed and cracking her ribs.  She bucked, causing him to stumble back.

The elephant clambered to her feet, thrusting a tusk into his snout.  Thunderstorm's head jerked to the side, she had punctured an olfactory bulb.  He latched onto her tusk, thrashing uncontrollably.  At last, he snapped it, but her head veered around, her remaining tusk grazing his cheek and going down his neck.  It wasn't a minor wound, but it still hurt.  Thunderstorm groaned, smacking his face into that of his prey.  She stumbled to the side, allowing him to ram her chest.

This time, she turned, hitting his lower jaw with her tusk.  Thunderstorm roared in pain, biting down on her face.  She bucked, shoving him into a rock.  The elephant then rammed into his chest, a move that sent him flying into the ground.  She went in, but he reached up and grabbed her neck, making her tumble.  Suddenly, a gunshot hit each of them in the chest.

They turned to see a jeep with poachers.  Both of the enraged animals pursued them, forgetting their duel.

I couldn't bring myself to kill either of them.

Pretty cool fight. Although, the T.rex would have slaughtered once it got the clamp xD. Triceratops developed the frill to protect against the tyrant's bite; elephant's are basically a mammalian discount Triceratops, without the frill it would have been no match. Still awesome fight, congrats on 700!

^Thanks, but I couldn't bring myself to kill an elephant

^Thanks, and when will chapter 28 be out?

SasquaDash started a new discussion: How The MonsterVerse Could Introduce "Son of Kong" on the Godzilla Movies forum
More Activity