Note: I know I haven't posted in a long time but that is mostly due to inactivity these past months. :( 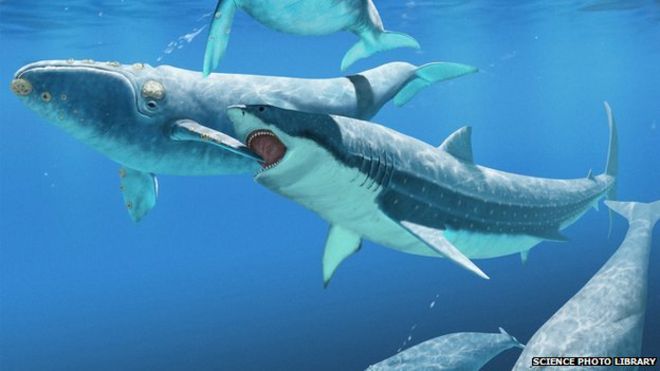 Its dusk, and a male Megalodon shark is searching for prey. As it cuts through the waters surrounding the island it senses something a few hundred feet away through its electro sensors, it can tell that its very big, after a few minutes it gets nearer, and the water clears to reveal a sub-adult blue whale swimming in the distance, its not fully grown but much larger than itself, never the less. It dips quickly into the darkness of the deep and pivots itself so that it’s directly beneath the gentle giant. It hasn’t fed in days and a meal like this will probably last him for months to come. He bolts upwards toward the giant hoping to land a good bite. As he’s about 50 feet beneath the beast, something rams him incredibly violently in the gills, which sends him into a momentary shock and allows the Blue Whale to notice the commotion and swim away. The shark takes a couple of seconds to recover, furious about losing such a meal, he scans the area looking for the creature responsible for revealing his location, he looks down and sees a 56 foot Mosasaur hurtling at him directly from beneath at speeds upwards of 30 mph. It rams him directly in the lower jaw. But the Shark angry about losing his meal is able to grab the Mosasaur from the tip of the tail fluke and pull it down, the Mosasaur realizing the danger she’s in changes direction immediately and avoids falling into the sharks deadly jaws she turns to face the shark, they both take a good look at each other and head towards each other like 2 bulls about to lock horns. The Shark is able to pivot slightly and gets a good grip on one of the Mosasaur’s front flippers it shakes in agony and bites the shark’s dorsal fin off, prompting the shark to let go, but still the Mosasaur’s flipper is badly damaged and will severely limit movement now, but then again the Megalodon suffered the bigger loss as its dorsal fin’s main function is for stabilization in rapid and sudden turns. Realizing its advantage the Mosasaur swims around the Megalodon in a semi circular path and accelerates suddenly towards the shark’s back end, if it can cut off the tail fluke it will have immobilized the shark and basically won the fight. But the shark dodges and bites the Mosasaur on the tail fluke, but as its about to tear it off its electroreceptors start picking up something strange, distracted by the sudden shift in density below them it lets the Mosasaur’s fluke go. The Mosasaur realizing it’s in great danger swims away but can’t accelerate well enough due to its crippling injuries, the Megalodon is following behind and is able to grab her tail, but using her snake like body she twists and turns underneath him and bites his bottom fluke and fins off, he dives in order to catch her, she tries to swim the other direction, sadly she’s too late. He bites down on her neck immediately killing her. The shark appears victorious, but knows its only a matter of time as the Mosasaur’s final action was to mortally wound him. A few hours later and he’s still swimming with a trail of blood behind him, he notices that another male is closing in on him, and unable to fight properly from exhaustion actually puts up a good fight against the cannibalizing male, but again his electro receptors pick up the same feeling and distract him allowing the other male to finish him off and land the killing blow. The Male feels like he has struck gold, and is overwhelmed by the food supplied to him by the Megalodon, but in his euphoria he is completely oblivious to the monster that lies in the depths waiting for the perfect chance.

even though they both died the Megalodon was able to win the fight due to its superior speed and maneuverability, however it was ultimately eaten by its own kind but the perpetrator of the cannibalization however has no idea the kind of raw-power heading for it

5 Responses to Mosasaurus vs Megalodon Btw, What do missed these couple of months ?

Good fight, but you should organize it into paragraphs

Yeah.... for a fight this long, you should divide it into 2-3 paragraph

DYNAMOSAURUS IMPERIOSUS - That was an exceptionally engaging battle! I greatly enjoyed how you depicted the weight of the animals within the water! Excellent work! Thank you so much for sharing this with us! :)

Elite Raptor 007: (excellent name;) well i actually have missed a lot the past few months but that's because for a while i was almost the only one posting but no problem

Lord Tyrant: noted! i will do that for my next battle which has been hinted at in the epilogue

Something Real: Thanks and hope you love the next one!

sonictiger started a new discussion: Did anyone else notice this? on the Godzilla Movies forum