There are eight contestants, so I might as well not put them in the title. Would you prefer if I called it 'Carcharodontosaurus Saharicus Vs. Giganotosaurus Carolinii Vs. Tyrannosaurus Rex Vs. Stegosaurus Armatus Vs. Dakotaraptor Steini Vs. Sarcosuchus Imperator Vs. Spinosaurus Aegyptiacus Vs. Allosaurus Fragilis?' I don't think so. Also, this is my 600th post so hooray for me! 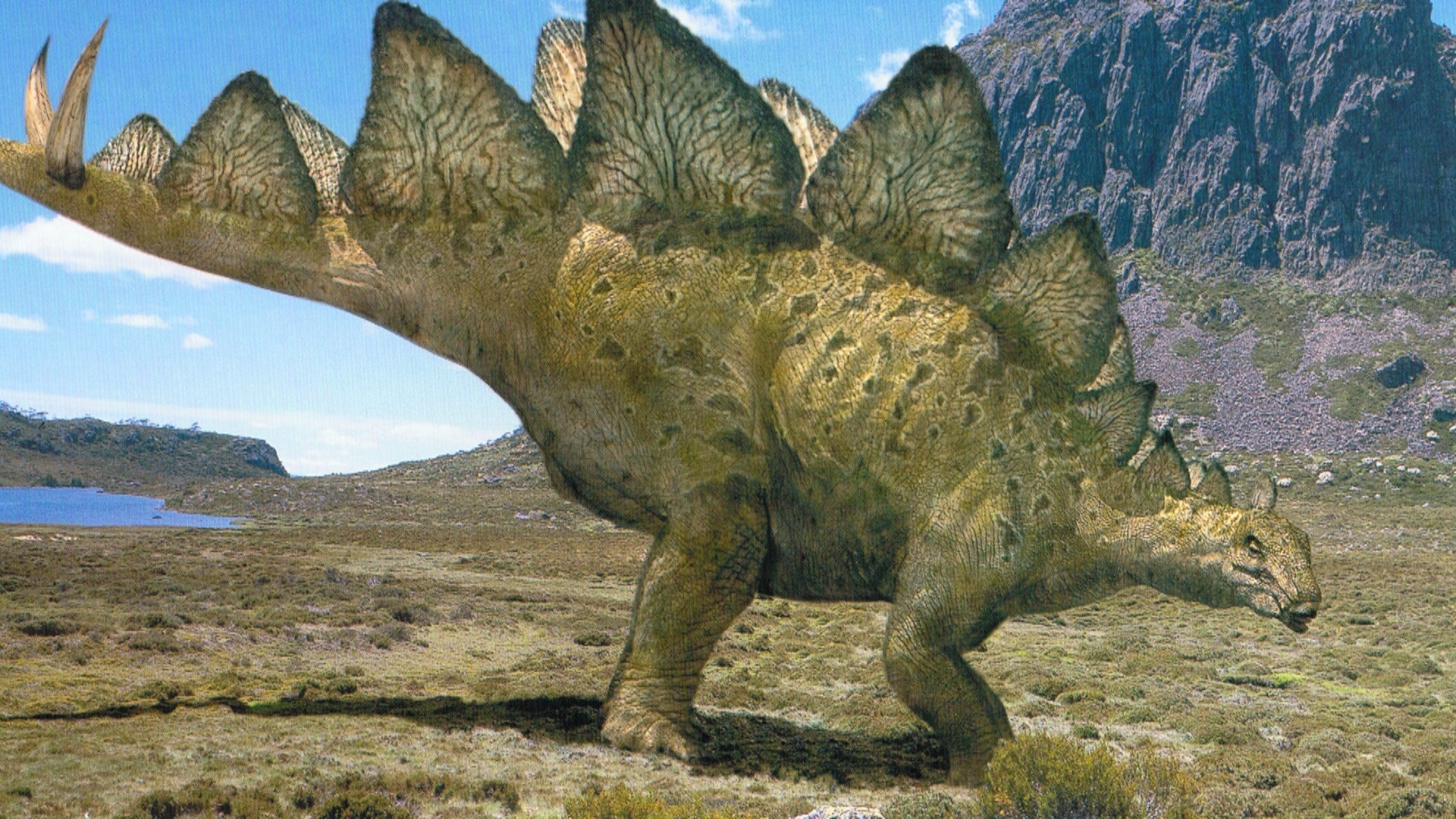 (Other two have same statistics as Eagle) 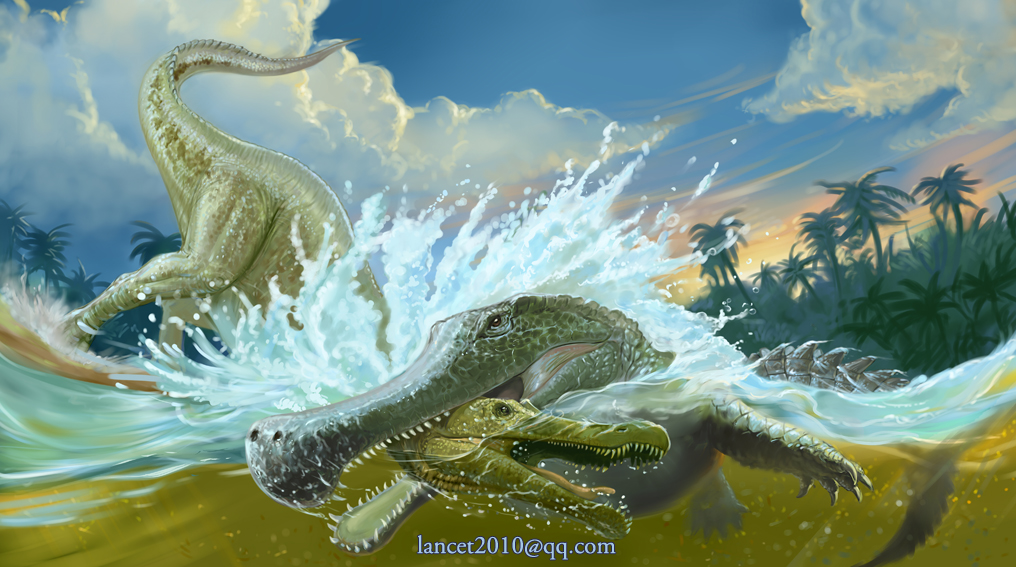 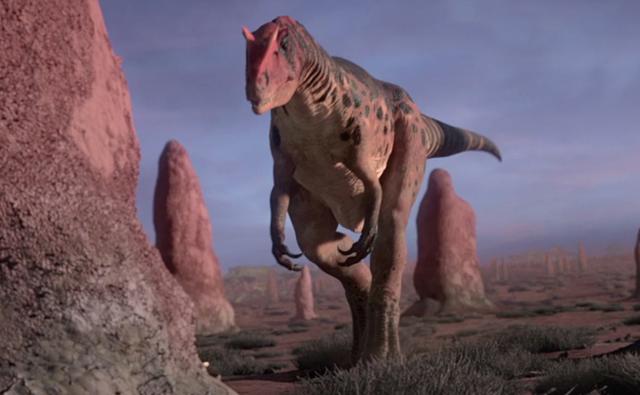 Giganoctus stomped onto the scene, he was hungry. At the same time, Bulldozer arrived. The two growled, a fight was inevitable. The two carnosaurs jawlocked, twisting and turning. They broke free, teeth and blood flying everywhere. Giganoctus rammed Bulldozer into the lake. Suddenly, a pair of meter long jaws clamped down on her neck. The Carc went under the depths, her head popping up a few times, gasping for air.

Giganoctus was attacked from the side. He turned to see Bulldozer, covered in blood, grab his shoulder in her jaws. She snapped his shoulder blade, immobilizing his right arm. The Giga yelped, lunging.

He grabbed the Carc's upper jaw, cracking and twisting it. A sickening crunch echoed through the land as his upper jaw came clean off. Bulldozer was sickened by the sight as the Giga slammed the Carc's very own upper jaw into his stomach, then disemboweled the beast.

After eating his fill, Giganoctus laid down and rested.

A while later, a Stegosaurus arrived for a drink. Suddenly, an Allosaurus darted out of the bushes. The Stego was caught off guard, the carnivore grabbing his neck. The herbivore grunted in frustration as he began slashing his shoulder. The Allosaurus felt a sharp pain in his ankle as the herbivore began swinging his tail, hitting his ankle over and over. he wrenched himself free from the Allosaurus's jaws, turning. His tail spikes smashed into his skull, penetrating deep into his brain. He had killed his attacker, but his tail was stuck in his skull. The last thing he saw were the open jaws of a Giganotosaurus. It was Giganoctus, and he tore the Stego's head clean off.

But a new threat quickly descended upon Giganoctus. Thunderstorm, a large male Tyrannosaurus Rex, thundered through the forest, arriving at the lake. Continuing his sprint at 25 miles per hour, he slammed his 9 ton body full force into Giganoctus.

Both predators flopped to the ground, Giganoctus's ribs shattered as Hell from Thunderstorm's ram and hitting the ground. The Giga got to his feet, slashing the T.Rex in the face.

Giganoctus grabbed his lower jaw, throwing him into what was left of Bulldozer. He crushed her remains under his massive body, but his ribs were also shattered. The T.Rex released a terrifying scream at his opponent. "**** YOU!"

"Gladly," Giganoctus replied, charging. Thunderstorm sidestepped, chomping down on his neck. With his one useful arm, the Giga slashed his shoulder. The T.Rex pushed through the pain, pressing harder.

Oops, the Giga thought. His last words were "OOOOOOWWWWW!!!!!!!!! Fukfukfukfukfuk!!!!!!!!!!" before Thunderstorm promptly snapped his neck. Giganoctus lay lifeless in his jaws, thrown down. He left to find a safe place to sleep.

Eagle led Hawk and Falcon through the forest, seeing the Stegosaurus corpse. A decent amount of meat was taken out of it, but they began to eat. A steady booming disturbed their meal. They saw Thunderstorm, now awake, come out of the forest. The Tyrannosaurus ran, jaws agape, but they got out of the way. Eagle ran between the T.Rex's legs, doing things I will not tell you about. Thunderstorm screamed "MY-"

His screams were cut off as Hawk latched onto his left arm, snapping the small forelimb. She fell to the ground. Falcon then jumped, his sickle claw sinking into his eye. This only enraged the beast, who crunched her other foot in his jaws. Thunderstorm dragged her down, her claw running down his face, leaving him a massive scar. Eagle and Hawk tried to flee. Thunderstorm saw, but a set of long narrow jaws caught him by the neck. Out of the corner of his eye, the Tyrannosaurus saw Spinax, and turned. Spinax sailed through the air, landing on his side. His ribs hurt, and he flopped about, grabbing Hawk. Eagle ran...

...Straight into the open jaws of an angry, vengeful Tyrannosaurus Rex. Thunderstorm had lunged as Eagle began to run. No screams, nothing. Eagle was obliterated in one crunch. The Raptor in his jaws, the T.Rex turned to Spinax, grunting. "Thank you for helping take down one of my enemies."

Hawk in his jaws, Spinax replied. "Eh, it was natural. I was merely looking for food."

The hungry Tyrannosaurus returned to the Stegosaurus, eating. But then, a massive Sarcosuchus charged his body into Thunderstorm's leg. The jaws dug into his limb, pulling him into the lake, but the tyrant kicked him off. Turning, he let out an ear-splitting roar. "MY MEAL. **** OFF YOU GAY ASS ******!"

The Sarco lunged, catching Thunderstorm's right arm in his jaws. He shook his surprisingly powerful forelimb, tearing the roof of the Sarco's mouth. The crocodilian let out a shriek of pain, crushing the limb.

Bad move! Bad move! Thunderstorm thought as his arm came off. The massive set of crocodilian jaws closed down on his throat.

"OOWWWW!" Thunderstorm cried. Followed by "**** YOU! **** OFF!" A berserk rage took over as he slipped out of the Sarco's jaws with some considerable effort. The croc's jaws were bent beyond their limit, snapped, and Thunderstorm returned to the Stegosaurus. Spinax feasted on the Sarcosuchus. I was taken aback by that storm of cursing towards the end lol, good fight.

What are your thoughts on a backstory for Thunderstorm?

Parents were killed by a tornado, so he travels the land as a Thunderstorm.

Is being taken aback a good or bad thing?

Kattozilla 89% To Next Rank
Conversationalist
Support Us
Become a Supporter / Help Keep us Online!
Latest Activity

monsterzero9 replied to Will we get solo movies for Mothra and Rodan if the MonsterVerse continues?
More Activity