The long awaited return of dinosaur fights is here!  The return has a new format for fights.  All dinosaurs appear the way they do in the pictures.  It will be like this in all future fights.  Today, we'll be looking at a T-Rex Vs. Spino substitute: T-Rex Vs. Oxalaia!  Let's get started! 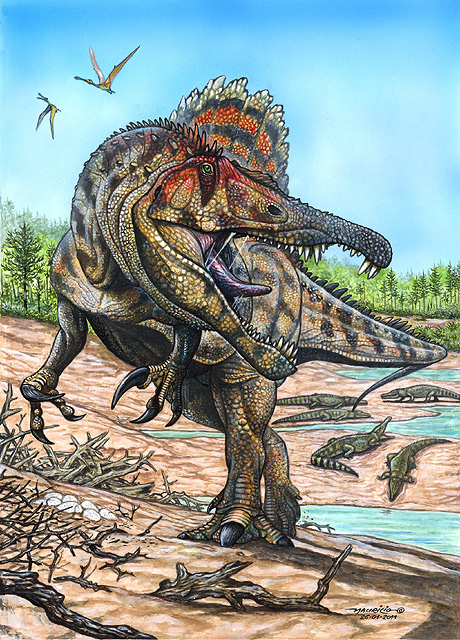 The Oxalaia killed the Suchomimus, asserting his dominance in the area.  He began to eat, when the ground began to shake.  The Spinosaur turned to see Rexy facing him.  She was hungry, both from fighting the Indominus Rex and from not eating in a while.

Rexy let out a deafening roar, echoing across the forest.  She was looking for a new territory, and this was the perfect place; it had many herbivores, shade, and a river.  Plus, her opponent had already killed another dinosaur.

The Oxalaia began to drag the Suchomimus away by its small spine, but Rexy grabbed the corpse by the neck.  Both pulled hard, but Rexy's stronger jaws allowed her to pull the kill to her.

As she did this, the Oxalaia reached up with his arm, hitting her in the face.  This seemed to light a fuse in her mind.  Rexy lashed back with a bite to the neck, but her foe slashed at her, hitting her neck.  The T-Rex let go, allowing the Oxalaia to clamp down on her leg.  She roared in pain, bucking wildly, trying to kick her enemy off.  Rexy succeeded, then went for his sail, biting hard.

He let out an ear-shattering screech as Rexy ripped out one of his backbones, unleashing the full ferocity of her rage.

The Oxalaia, fatally wounded, collapsed, as his attacker grabbed his skull, crushing it with a loud CRUNCH!!  Rexy then feasted on the Oxalaia and the Suchomimus, satisfying her hunger.

I guess Oxalaia learned a lesson! And it comes in only five words!

Hail to the queen!

By the way, the Indominus Rex is stated to have been been 'bigger than a T-Rex' or possibly 'Rexy' in Jurassic World. In your case, you've estimated both the I-Rex and Rexy to have the same size as each other. (Didn't you? I'm not sure anymore) DARTHJPSPINOREX65 - That was an exceptionally fun battle! I am very pleased that the T.rex came as the victor in this particular clash! Excellent work! Thank you so very much for sharing this with us! :)

Well, this was a one-sided fight in her favor.  Anyway, thanks for your feedback as usual, SR.  Glad you enjoyed the fight. ;) I think that Oxalia should have won (no offense anyone) but rexy did good.

I think that Oxalia should have won (no offense anyone) but rexy did good.