"The American robin lent its name to a striking shade of blue, but the vivid hue may have been colouring eggs long before the bird evolved – perhaps long before any birds evolved. It may have appeared in the dinosaur ancestors of birds that lived 150 million years ago.

Although recent studies have revealed the colours of dinosaur feathers, skin and scales, we had known nothing about the original colour of their eggs.

Ornithologists once assumed early birds, and the dinosaurs they evolved from, laid white eggs. But we know that some of the most ancient groups of birds still around – including the tinamou and emu – actually lay coloured eggs, points out Mark Hauber, an animal behaviourist at Hunter College in New York.

His group has discovered the chemical origin of the avocado-green from emu's eggs, as well as the blue of robin's eggs, the brown of chicken's eggs and the pinks and purples from the eggs of other birds belonging to ancient living groups. The colours come from the way that two pigments in the shell – biliverdin and protoporphyrin – blend with each other and with the calcium carbonate that makes most of the shell."

Check out the rest of the article: First evidence that dinosaurs laid colourful blue-green eggs

thats amazing. we can see which dinosaur laid each egg by its color. astounding

SVANYA - That is incredible! Hmm...I wonder if there were other variances in color...How very neat! Thank you so very much for taking the time to share this with us! :)

Yaaaaaaaaaaaaay every dinosaur nest I've ever colored is now innacrate.

SCI-FI KING25 - Oh, it is alright! I am sure your drawings are still beautiful! :) 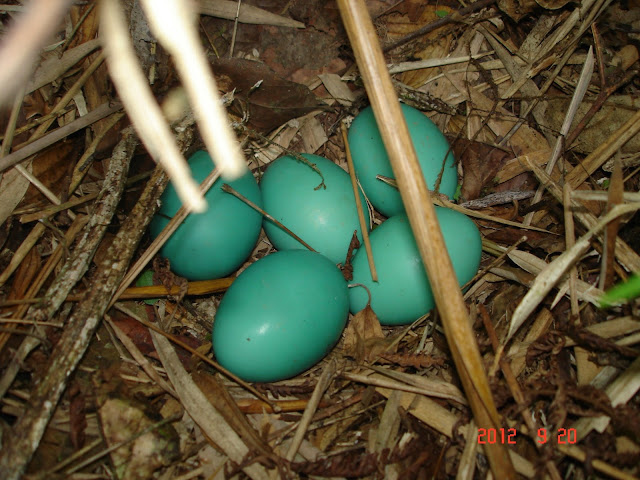 Fantastic and they are beautiful!