We all think most carnivores like the king-T Rex eat meat but dumb research shows that the most therapods are actually herbivores....... WHAT THE ****!!!!!!!!!!!!

I actually like when research like this came out because its for nothing you jerks! But guys and gals we don't know yet until we can travel through time. Who know research can be wrong research can be right. But there is no way in the HELL T-Rex and other therapods can eat vegetation there is edvidance too!

These school computers are more annoying than the Rex vs Spino debates, can't do paragra[hs, so I'll use whatever the f*ck these things (-----) are called.------All right guys, you can go home, paleontology is over, all of life's mysteries have been solved, there's nothing to live for anymore..... And Velociraptor was bigger than Spinosaurus.------There's too much evidence to prove that false. That's like saying Spinosaurus ate mostly other predators that it killed; it didn't. I wouldn't worry, but thanks for giving me a good laugh and an excuse to be kinda sarcastic. They're really basing it off the idea that birds are mainly herbivorous, so eventually, dinosaurs needed to be too. They don't have any science to prove it. It's all based on presuppositions and imagined scenarios.

There are animals like the Chinese water deer (the "saber-toothed deer) that are weaponized and only eat plants. Actually, great white sharks have serrated teeth, and they have been proven to take kelp (an EXTREMELY tough plant) over tuna, when given the opportunity.

So, while serrated teeth can very well be used for tough plants, it's pretty obvious that therapod dinosaurs were mainly carnivorous -- from carnivore shed teeth found in other dinosaurs to the velociraptor-protoceratops fossil. I wouldn't worry about it. It'll probably (and hopefully) blow over.

Here's some food for thought:

Scroll down to number 1: Triceratops. This says it may have been partially carnivorous (which makes sense). Now THIS could change JP movies...

Hmm... strange... from all that... I understood something else.

I personally understood they were talking about the last, avain theropods (that, to your information, were A LOT :P ), so yeah, if the theory is about them, I kinda support it.

I might be wrong though. The ironic comments of the poster confused me :P

COme on!!! Those claws could have been used to cut up some nice huge salad!!!

TYRANT963 - I certainly wouldn't put too much energy into your anger over this new and rather absurd line of thinking. You've only to look at nature across the whole of time for a good understanding of how animals function. During our day and age, there are many carnivores - bears, great cats, wolvs, etc. During the Ice Age and the age of the Mega Fauna, there were also a great many predators - including Smilodons, Short-Faced Bears, and Dire Wolves. It stands to reason that there would have been quite a large turn-out of carnivores during the age in which our world saw its greatest variety of life-forms. Predators serve an incredibly important role within nature, keeping the populations of other creatures in check. If most theropods were actually herbivores, then it seems strange to me that the reign of the dinosaurs didn't come to and end due to overpopulation. Additionally, why do sauropods not also have massive, balde-like teeth if that's the best way to shear through tough plant material? It seems to me that the scientists whom posited this new theory were reaching - tremendously. :)

I'll use the same arguement for this that I use for my T.rex being a hunter one. If they didn't keep the herbivores populations in check, then what did? 'Nuff said. 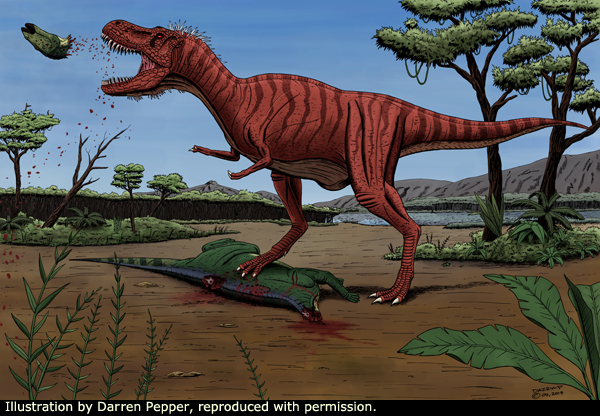 Most of them are complete Shit, Trying to create something dumb.

Now, I'm not calling out anyones religon, I respect that. However, Some time ago a Professer in Biblical History, Put foreward something like,

Now neglecting the Sin part, Because I'm not judging religon... Looking at the T-rex, How in the name of Odins Beard, Does that make sense...

Course, Man kind isn't the brightest Species, We no litterally nothing... Zip, But we act like we do,

YOUR AROGENCE IS YOUR FAILURE MAN KIND

We base everything off of modern species today, Neglecting that Dinosaurs, Didn't live in our Ecosystem Today. Aswell, We try and make connections, that aren't there...

So birds may have some of the same traits as Dinosaurs... That doesn't mean we can just draw a bloody line linking everything together.

LIES! LIES I TELL YOU! THEY"RE ALL BLASPHUMAS (i prbably didn't spell that right, but wtf) LIES!

I don't believe these theropods were vegetarians, maybe ate some plants. Think about it, dogs and bears eat plants every once in a while. But they're not vegetarians.

those studies, i've read them before. They're based on pointless speculation, pointing that modern birds are omnivorous.

The Raptor family, which is believed to be the direct descendant of small theropods, are not omivorous.

They base their findings off of small birds, which is just pointless.

There is nothing but baseless bull here.

Move along fellas, nothing to see here.

"I fear all we have done is to awaken a sleeping giant and fill him with a terrible resolve."