To those who are concerned about seeing movie...

I think some should not take my view as bad... I think the movie was not bad at all, visually its a treat, the story and plot is very good. My gripe was that i felt its a shame they never had 3 hours to do the movie to give some depth to some of the movie to then give the scope of its great plot more detail.... But then thats what a sequel could be for, and then Ridley never did this movie so he could go explore Xenos or Weyland as they been done in Aliens etc. He wanted to do the Space Jockey and give a back ground story to them, so i guess when trying to tie that in, with some links to Alien and Weyland that sadly to fit it all in 2 hours was not long enough. However Prometheus 2 would have free reign to explore the other elements in depth... End of the day guys everyone may have different views, some on here do not like Aliens does not mean it was not good movie while some liked it. Prometheus is a movie that you need to go see for yourselves, for some it will be more than expected, for others maybe not as expected. But i dont think many would come back and hate the movie or say its poor. You would be better to see the movie and if it does not live up to expections, its better to had seen it than not to had and besides there are not many Sci Fi movies out there where the concept has been done to death over and over..... Battleship. Battle for Los Angeles. etc. So this movie is different, you would kick yourself if you gave it a miss and then saw it on TV and liked it and thought.... i wish i saw this in the Cinema... which by then you would also have the movie spoilt. If your a Ridley Fan, a Alien fan or just love Sci Fi you owe it to yourselves to go and see this movie, it may suprise you it may please you, for some it may not live up to expectations... but name me many Sci Fi movies in last 20 years that can touch the bar raised by Alien and Blade Runner.... What else are you going to save your what $10-15 for....... Transformers 4...... Battleship 2..... Halo the Movie..... All will be simular... This movie tries to be different, nice story shame we never had 40 mins longer.... but then i guess a 2-3 hour sequel would allow Ridley to explore his new baby more... So take negative reviews with pinch of salt, try not to take my comments to deep and go see the movie yourself. What would be worst....... 1) Go see the movie and it disapoints in some areas.... but then may please you.... 2) Dont go see it, and find out about the plot and think.... erm thats not bad, then see it on TV and wish.... i should have seen it in 3D at the cinema... For me i would pick 2! every time....

8 Responses to To those who are concerned about seeing movie...

I went to see it today and hated it. Not disliked, but hated it. Yes it has good visuals but good visual backed up by an poor plot with more holes than a teabag. It's probably the worst film I have seen for sometime and the fact that it is set in the aliens universe makes it even more insulting. It makes alien resurrection look like an Oscar winner. 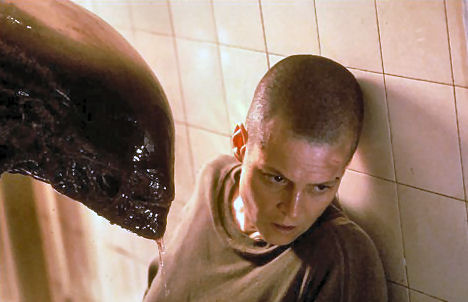 The next LV couldn't agree more. The very fact that someone feels the need to create a post like this is proof of the films poor quality, you dont need to create threads about epic film talking about it (there already formed and people have been posted on them already). It may have been a descent film on its own, but considering it had over 30years of history the film was an absolute abortion!

Right with you Nextlv. I've seen it twice as I really wanted to give it a second chance. "I was wrong, I was so wrong!" I'm angry that I've devoted time over the past year or so to anticipate a great movie ahead. I'm annoyed that the third act is a cram it in fest! I'm boycotting anything that Lindelof is involved with in the future. I'm boycotting anything that Marc Streitenfeld is involved with in the future. Post 3 days after my 1st watch, Post 2 days after my second and I'm reading ream after ream of post that pretty much concur with my view. I'd go as far to say that anyone who actually rates the movie in its entirety has no appreciation of how cinema should really be executed in terms of the scifi genre. I didn't expect to see a homage to Alien so I was positively optimistic of how this movie may be presented. Instead, I was presented with a homage to AVP! Now, I really wasn't expecting that!

Sorry, but the negativity doesn't fly with me. People's high expectation of Prometheus has gone to the stratosphere. It seems like this culture today loves to hate everything with a huge film budget. I'll see Prometheus for what it is, next week. Screw these "hardcore fans" .

If even people who hated the movie watched it more than once, there's no doubt the box office will explode and a sequel will be granted :-)

Hardcore fans? I don't think I'm in that category!

It's fine. It is a solid addition to the sci-fi genre. There is nothing wrong with it, I do not understand the criticism people level at it on this website. Only about 10% of critics worth their salt have given it a negative review, theres about 30 newspaper/journal critics in the states and Europe which have given it positive reviews so far. The people who throw insults at it don't seem to be able to grasp exactly what makes a quality film at all, and should be waved off as hardcore fanboy ravings.