In 1980's Star Wars Episode V: The Empire Strikes Back audiences were introduced for the first time to the bounty hunter Boba Fett. Portrayed by Jeremy Bulloch and voiced (originally) by Jason Wingreen, the bounty hunter was employed by Darth Vader to track the Millennium Falcon in a bid to lay a trap for Luke Skywalker. In return for his services, Boba Fett was given custody of smuggler Han Solo, frozen in Carbonite, so as to collect the bounty placed on the smuggler by Tatooine's notorious gangster Jabba the Hutt, Fett's primary employer, as evidenced by the bounty hunters status of bodyguard to the Hutt in Episode VI: Return of the Jedi and the deleted (and later reintroduced) scene from Episode IV: A New Hope.

The character of Boba Fett was expanded upon in the prequel movie Star Wars Episode II: Attack of the Clones with the introduction of Jango Fett (portrayed by Temuera Morrison); a bounty hunter wearing Mandalorian armor employed by Sith Lord Darth Sidious to assassinate Senator Padme Amidala and to act as the genetic template for an army of clones intended to serve the Galactic Senate. In return for his services, Jango requested an unaltered clone which he named Boba, portrayed by Daniel Logan. After his involvement with the separatists was uncovered by the Jedi, Jango Fett was murdered by Jedi Master Mace Windu.

Boba Fett has become a cult figure among Star Wars fans, is one of the top five best-selling figures from the franchise and is one of the most popular choices for cosplay by fans at conventions. The character is also a popular choice in video games having recently appeared as a Hero character in EA and DICE's Star Wars: Battlefront. With Rogue One: A Star Wars Story opening in theaters this December and another non-episodic Star Wars movie focusing on Han Solo expected to be released in 2018, and with interest growing from Lucasfilm and actor Ewan Mcgregor for an Obi-Wan Kenobi movie, what does the future hold for a Boba Fett movie? 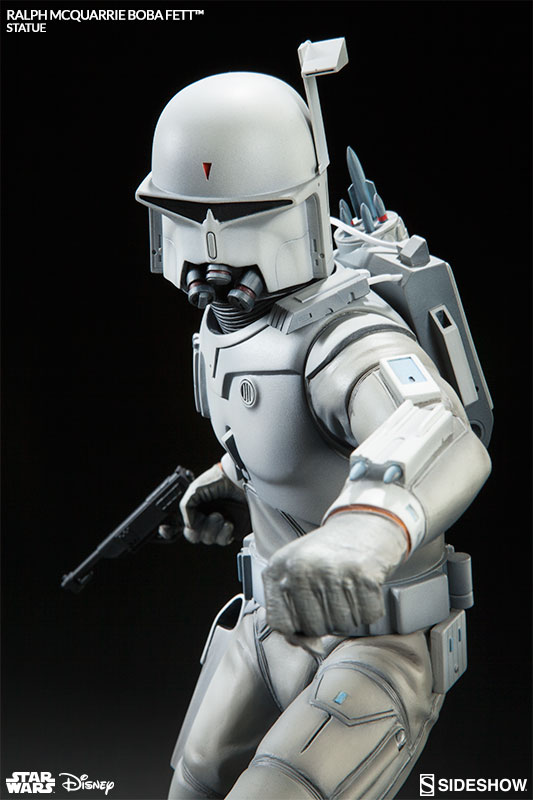 There is no denying the characters popularity, whose iconic armor was originally designed by Ralph McQuarrie and Joe Johnston to be used by "Imperial Super-Troopers" (pictured above), but the characters demotion to a supporting character in The Empire Strikes Back (in which he originally was intended to be the primary antagonist) by creator George Lucas foreshadows one important factor about the character - despite looking cool and having become so popular, Boba Fett doesn't match up to his legend, as evidenced by the characters known actions in the original trilogy...

Following a cameo appearance in A New Hope, which showed Boba Fett to be but one of many of Jabba the Hutt's bodyguards the bounty hunter was employed by Darth Vader to track the Millenium Falcon. After covertly tailing Han Solo's iconic freighter to the planet of Bespin Boba Fett struck a deal with the fearsome Sith Lord, in return receiving Han Solo, frozen in Carbonite. Returning to Tatooine Boba Fett collected the bounty for Solo before continuing his service as one of Jabba the Hutt's bodyguards. Then, while aboard the Hutt's sail barge during the execution of Han Solo and his Rebel Alliance cohorts Boba Fett was repeatedly outsmarted by Luke Skywalker before being knocked into a Sarlacc pit, presumably to his death by a blinded Han Solo. 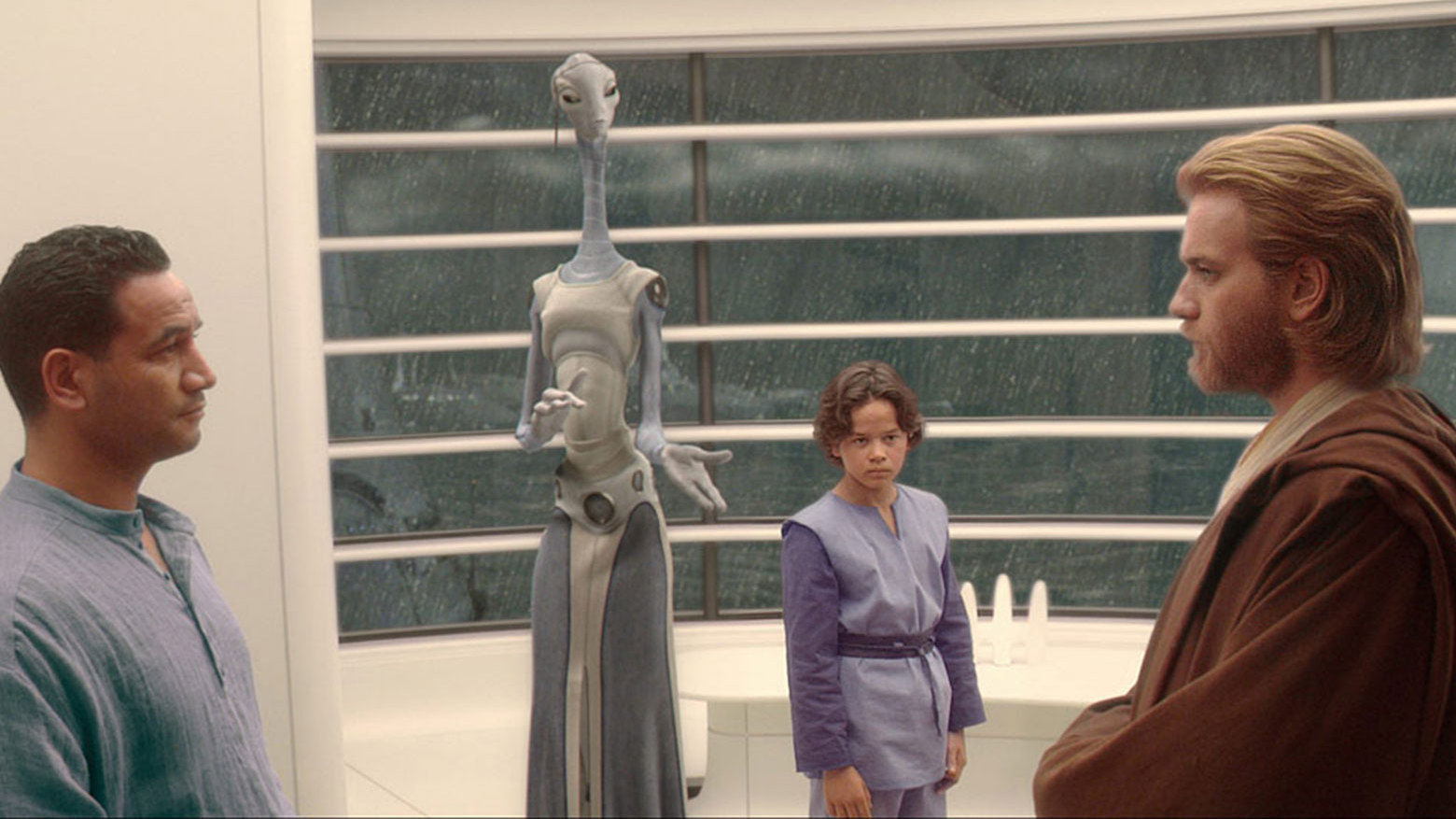 While speculation and even a fan movie (see top of article) claim that the bounty hunter somehow survived the Sarlacc pit, the characters actions as witnessed thus far doesn't really warrant his return to the big screen, especially in a movie focused entirely on possibly the galaxies worst bounty hunter. With the possibility of an Obi-Wan Kenobi movie looking more likely maybe Boba Fett could make another supporting appearance and face off against the Jedi who uncovered Jango Fett on Kamino (pictured above).

100% agree Boba Fett is the perfect example of looks without substance in the cinematic universe. He never does anything noteworthy and is killed out almost off-handedly in ROTJ. He was always noteworthy to me when I was younger because he pretty much was an upgraded semi-competent stormtrooper. In episode 2 it's almost implied he is. Every big universe has a character or two that pretty much has no personality just looks cool and can work when paired with better characters that take the spotlight off him making his lack of depth much less clear.

I'd be all for him getting a novel like Tarkin did, but a whole movie is questionable at best. Totally against the idea personally.

I don't care how little backstory Boba has, I would love to see a film featuring his backstory! But I would settle for a cameo appearance. I just think he has more substance worth exploring, hey may be one of the lesser developed characters, but that just means there's more room to develop his story.

I think that Boba Fett is cool, I like the mystery that surrounds him. Yes I know that he had a small part in the prequels but I don't think that it counts that much.

Boba Fett was not used to well but he did stand out as one of the most popular characters and i would say most people would want to see a Boba Fett movie than a Obi Wan...

However its a case of is there enough to justify a movie to one Character when a movie that maybe links a few could work.....

I hope if they do a Boba Fett movie then it can also give us Jabba Origins to a degree and have the Han Solo movie also touch upon Jabba too.

If dont right, these movies could work... but it could end up the case of Disney just spouting out SW movie after movie....  i fear Fox will do the same with Alien movies and Predators too.

As a big star wars fan I can pretty much assure you, that outside of a small fan base there is no way people would want Boba over Obi Wan. Especially if Ewan Mcgregor can play Obi Wan. Hell ask anyone who's read the Darth Bane trilogy, or Thrawn if they think Boba fett should get a solo movie over those characters and you'd get laughed at 9 times out of 10.

The idea of toy sales almost skews things. Sure Boba Fett is sold a lot but that is primarily what an aesthetic character does. They look cool, so you buy things that show this off, any random child between the ages of 4-9 would probably choose a Boba Fett toy over the other options because Han, Luke, ect don't really look especially "cool" something Boba Fett does bring to the table.

Spouting out Star wars movies for years could work, the only problem is Disney seems to be reaching heavily into the time of the original trilogy, instead of branching out. You could make 10 trilogies of things that happened before episode 1, because that whole time is wide open to interpretation. They could make their own ideas of take from the heavily populated legends materials from this time, but this idea of milk the original trilogy for all it's worth in terms of content will get stale soon.

Wait, didn't do anything substantive..? You all may have missed this, but he found the millennium falcon after the empire failed, miserably I might add. Also, did you guys meet his dad? He was pretty awesome too, and is a clone of that guy so...