Despite previous assertations from Variety to the contrary, it appears that co-screenwriter of 2009's Star Trek and its 2013 sequel Into Darkness Roberto Orci is not actually guaranteed to replace J.J. Abrams as the director of the sequel, of which he is currently penning with John D. Payne and Patrick McKay. According to the screenwriter, whom recently cut ties with long time collaborator Alex Kurtzman, studio Paramount Pictures has yet to even greenlight the project, pending of course on the finished script. 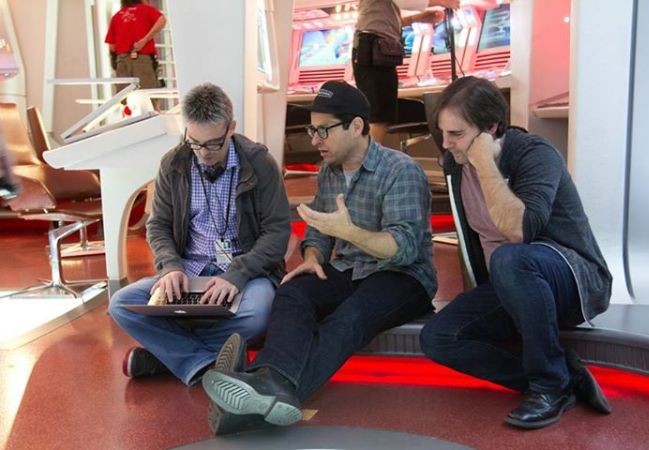 Orci (right) next to Abrams and Kurtzman on the set of Into Darkness!

"Well, I don't want to count my chickens before they hatch. The studio has yet to even read the script. I'm in the middle of writing it, with the talented team of [John D.] Payne and [Patrick] McKay. They are true Star Trek fans, as well. So, I can't even think anything about the future until I give them a script and they greenlight it. Until that happens, everything else is just a rumor."

"If I'm lucky enough that Paramount loves the script and that we go forward, it'll be because I have loved Star Trek for so long and the idea of having seen one of the best guys in the business direct two of them already, and to have seen it from the vantage point of a producer too, I know where a lot of the challenges are and where a lot of the fun is. If we're lucky enough that everything goes right, then I'll start to feel the pressure. As a writer, I feel the pressure as the returning screenwriter to this franchise. I feel it at the story level. I can't speak for Payne and McKay, but they seem to be having a good time. They don’t look as nervous as I feel, but maybe they're just good at hiding it." 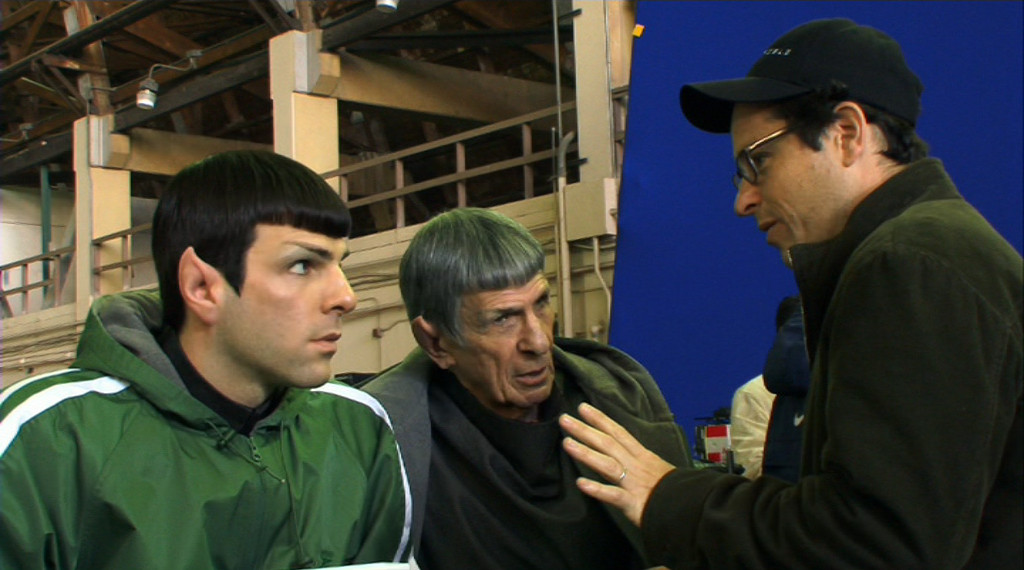 Quinto and the legendary Leonard Nimoy on the set of the 2009 reboot with director Abrams!

With Chris Pines recital of the famous monologue from the original series at the end of Into Darkness many fans believe that the sequel will be set during the crews adventures during their five year exploratory mission into deep space, something echoed by Zachary Quinto, while he was promoting his new TV serial The Chair at the recent TCA's...

"I think the five-year mission will be a part of this next film in some way. We're coming up on the 50th anniversary of one of the most iconic sci-fi series in entertainment history, so it's inherently an ongoing story. But I do think that we'll feel some sense of evolution in these characters that's been building through the first few films."

"Bob [Orci] is definitely sort of a purist about the Trek universe. I've spoken to him a number of times about his ideas and they're really exciting and I'm really excited that we get to be a part of his feature directorial debut. It'll be a different world without J.J. [Abrams] on set every day, but this is a family and Bob is an essential part of that family and we're all really excited to see where it goes. The script is being tightened and polished and finished and I imagine that the phone will be ringing in the next few months to see when we'll go back into production."

Despite critical acclaim for the actors performances, especially that of British actor Benedict Cumberbatch, many fans felt that the 2013 sequel Star Trek: Into Darkness reverted to type, essentially following the outline of the original second Star Trek movie; Star Trek II: Wrath of Khan, and didnt use the potential of the new, fresh timeline promised by it's predecessor. As such fans are hoping that the in development sequel will use that potential, with some fans hoping to see greater repurcussions of the diverging timeline with the inclusion of enemies originally experienced later in the timeline, such as the Romulans, the Dominion or even the Borg.

Thanks to Collider and IGN for the news!