J.K. Simmons, recently seen and best known to modern audiences as J. Jonah Jameson in Sam Raimi's Spider-Man trilogy is to join the cast of Alan Taylor and the Ellison siblings' forthcoming psuedo reboot Terminator: Genesis. Despite his comical performance in the aforementioned series of movies (as pictured below) J.K. Simmons is a very talented actor whom has appeared in many films and TV shows, as well as lending his voice (and appearance) to many cartoons and videogames, so his inclusion in the cast comes as good news! 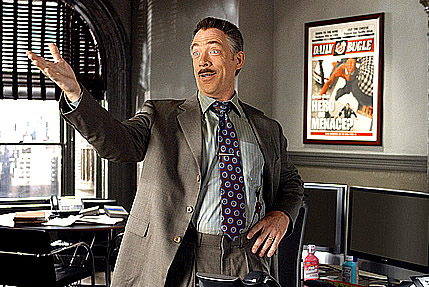 Bizzarely enough, however are the details of the character of whom he will be portraying. Reportedly (by THR) Simmons will play "a weary and alcoholic detective who has followed a bizarre case involving Sarah Connor and robots for more than three decades (since 1984, which, not coincidentally, is the year the original movie, directed by James Cameron, was released)."

This would mean that the film, or the parts of the film starring Simmons are set in 2004, which according to Terminator 3 is the (inevitable) date of Judgment Day. This is despite reports that the movie is said to overlap the events of the first two movies, which are set in 1984 and 1994 respectively.