Many audiences would incorrectly describe visual effects as the art of creating the unimaginable; more correctly visual effects are about the art of creating an illusion. A stage magician does not cut a woman in half, or pull a rabbit from his hat or disappear into thin air; through distraction and trickery he creates an illusion of the effect he is attempting to emulate. Typically when being cut in half the “volunteer” places their legs within the first half of the compartment while a second person, a “leg double” places their legs in the second compartment. A similar technique was used in 1979's Alien, with British actor John Hurt sitting inside a table as a rubber duplicate of is body was used in the movies legendary “Chestburster” scene. 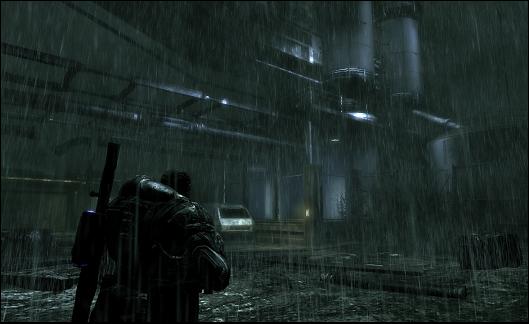 Video games have, and still do, use illusion to create impressive visuals. The record breaking Gears of War, released in 2006 featured a stage bombarded with a heavy downpour of rain. Rather than attempt to emulate nature with individual raindrop particles, the developer Epic Games used a variety of techniques (animated planes, 3D real mapping noise, distortion and most importantly sound effects) that when used together trick the eye into seeing a heavy rainstorm. Simple trickery can be a powerful tool in visual effects when used correctly, no more is this statement more apt than when looking into Reverse Photography.

One of visual effects most simple techniques reverse photography can be used to both create illusion and confuse, even unsettle the audience. Yet despite the techniques simplicity it actual requires dedication to be used effectively. One of the most well known examples of reverse photography effects in movies is of course the 1981 classic An American Werewolf in London. During the iconic scene in which lead actor David Naughton transforms into a werewolf, hair is seen sprouting from the pores in his skin. This disturbing visual was created by filming the strands of hair being pulled into the rubber skin of a body double, and then just simply played back in reverse in the movie.

James Cameron used the technique in his 1986 hit sci fi movie Aliens, to create the effect of one of the movies creepy antagonists, the Facehugger, jumping onto a pipe. Though only used sparingly, the technique helped imbue the Facehugger with menace and malice in the scene.

More recently reverse photography was used, to great effect, in the cult classic 1998 Japanese horror movie Ring. Towards the movies climax, the movies antagonist Sadako crawls out of a television and towards Japanese actor Hiroyuki Sanada. In this scene the movement of Sadako, portrayed by Rie Ino, looks and feels unnatural, having been realised using reverse photography.

Another, and very impressive use of reverse photography can be found in the music video to Coldplays 2002 hit single The Scientist, in which the bands vocalist Chris Martin is shown progressing backwards through a series of events, though seemingly lip-synching to the songs lyrics. To create the effect Martin sang backwards, a technique which took a month to learn.

Hollywoods over reliance on Computer Generated Imagery, or CGI, is starting to have a negative impact on the creativity and likely the profitability of recent movies. One promine... Read More