The team here at Scified love movies, but coming a close second to that love is our love of video games. One of the better games we like to play is Rockstar's latest epic, Grand Theft Auto V. The games sheer size combined with a wealth of things you have to do, and an equally large number of activities you dont have to do, all tied up with satrical social commentary, an one of the funniest characters in any form of entertainment ever, in the guise of Trevor Phillips, makes GTA V one of, if not the best video game ever developed. Additionally the developer Rockstar has, since the games release, released a whole plethora of DLC for the game, for free; making GTA V exceptional value for money. 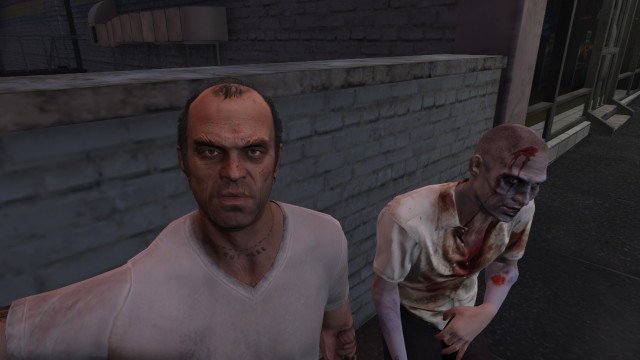 YouTuber Chr0m3xMoDz, believes they may have found the content of the much publicized story mode based DLC rumored to be coming to the game later this year. While GTA V fans wait eagerly for the much coveted online heists, it appears Chr0m3xMoDz has uncovered something in the games code that refers to a "dead" option in the games DLC menu, which checks for the content "SPZOMBIES" upon selection.

Taking into account the plethora of ufo references found in the game, coud it be that a future DLC for the game will infect part or all of the games population with hordes of the undead, much like in Saints Row 3. Battling to survive against hordes of zombies in such a plentiful and highly populated environment would only add more awesomeness to what is arguably 2013' greatest videogames.