The latest addition to the new Star Wars Expanded Universe focuses on the Dark Side duo of Darth Vader and Emperor Palpatine - and is the best novel to date in the new canon. 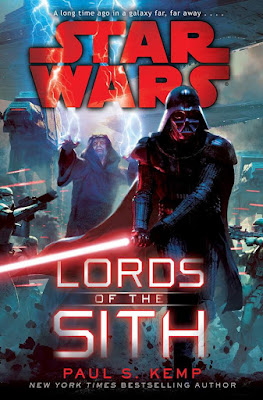 The story takes place between Revenge of the Sith and the recently released novel Tarkin. Situated on the Twi'lek homeworld of Ryloth, the novel sees a group of revolutionaries, led by Cham Syndulla, causing trouble for the Imperials in the sector. Palpatine decides it's up to him and his apprentice to sort things out.

As the story moves forward, Cham sees a chance to kill the leaders behind the Galactic Empire and sets his people about hunting the duo, after they become separated from their forces.

This novel is all kinds of awesome. The team-up aspect between Vader and the Emperor is fresh and exciting and, while it may seem somewhat unusual, it just works.

Paul S. Kemp does a great job letting the reader into Darth Vader's had throughout the course of the story. This allows for an in-depth look at what fuels he man who was once Anakin Skywalker and let the reader decide just how far gone from the man he used to be Darth Vader really is.

It doesn't take long to see that this story is all about Palpatine an Vader, but even the supporting cast for this story is most impressive. Cham Syndulla is back to battle the bad guys after appearing in a handful of episodes of Star Wars: The Clone Wars. He's a good guy trying to liberate his people from the oppressive hand of the Empire by doing the right thing.

Then there's his right hand woman, a former slave named Isval. She's far less morally upstanding than Cham, but Kemp does a great job delving into the dark history of what it means to be a Twi'lek slave, thus giving good reason as to why Isval is the way that she is.

To sum things up, this book is both strong and intense. With each turn of the page, it is evident that the clock is ticking and that the non-Sith characters better get moving if things are ever going to be set right. The team-up dynamic of Vader and Palatine is fresh and exciting and, when they begin to tap into the full power of the Dark Side, it moves the story to a whole new level that we hope will one day be shown off on the big screen.

Honestly, Paul S. Kemp presents this one as more of a movie then a book. Sure, the ending is a little rushed, but everything within is so fresh, exciting and fascinating that all you'll really want come closing page is to see this story unfold on the big screen, where it really deserves to be told.

Pick this one up, Star Wars fans. It won't take long to see why it's the best addition to the new canon to date!

0 Fan responses to Review: Star Wars: Lords of the Sith