The 1960s were the Golden Age of Daikaiju Eiga; Toho was never more successful with the genre. Mothra and Rodan had merged with the Godzilla series to massive success. Atragon, Dogora and Frankenstein Conquers the World were genre films ushering a thriving age of tokusatsu. Other studios were following in Toho's footsteps. Nikkatsu would release Gappa, Shochiku created Guilala, but only one other studio made a commendable effort against Toho's success: Daiei's Gamera.

Because of Godzilla's loyal and passionate fanbase, Gamera has often been branded a weak imitation or a rip off. Indeed, Daiei was using Toho's template for giant monsters, but their approach was immediately lighter than Godzilla's genesis. Director Noriaki Yuasa was more concerned with making action movies for children than atomic allegories or social commentaries. As a result Gamera's 1965 debut is, admittedly, uneven, but the movies that followed would find a niche for the super turtle. He would become, “The Friend of Children.”

Targeting children paid off for Daiei with seven sequels and a place in Japanese pop-culture. Of the Godzilla “rip offs,” Gamera was the most successful. But Daiei wasn't the only one playing copycat in terms of audiences. 1964's Ghidorah: The Three Headed Monster is often considered the starting point for Godzilla's heroic transformation. Yet, even as Godzilla became more child friendly in films like Son of Godzilla, he was still feared by most characters. In contrast, Gamera was a monster that children constantly rooted for in the films.

By the 1970s Godzilla was taking cues from Gamera's success. The monster king had become increasingly more anthropomorphic, friendlier and appealing to young audiences. Children were now rooting for Godzilla; so who was ripping off who at this point? 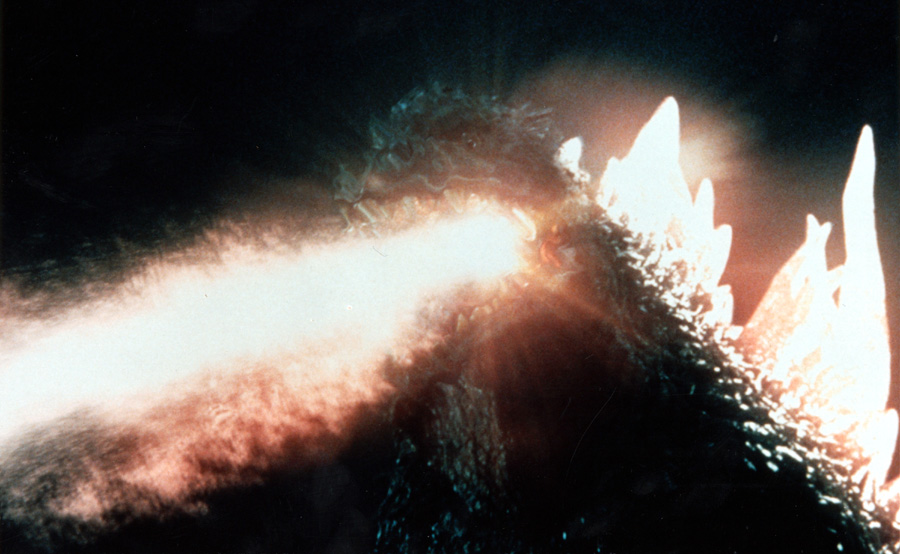 I don't believe either Gamera or Godzilla are, the overused term, “rip offs” in any real sense, but it's interesting to recall Gamera's forgotten influence over Godzilla. While it's true producer Tomoyuki Tanaka was always looking for ways to broaden Godzilla's audience it's not heresy to assume he made some decisions based on Gamera's success.

By the late 1990s, the daikaiju world had changed. The Heisei Godzilla had concluded with great success, but moderate critical reception. In contrast, director Shusuke Kaneko's Gamera reboot seemed to be pushing the boundaries of the genre. Constantly hailed as some of the best examples of daikaiju eiga, the Gamera Trilogy would be another influence on Godzilla's return in 1999.

Many special effects techniques that the Gamera Trilogy had perfected were immediately aped in Godzilla 2000: The CGI missile barrage and Godzilla's atomic breath effect were very similar to those in Gamera: Guardian of the Universe. (Godzilla's basic atomic breath was even changed to the same color as Gamera's plasma blasts.) The same team that created the Legion army in Gamera 2: The Advent of Legion were used for the Meganula swarm in Godzilla x Megaguirus: The G Eradication Operation. And as if using particular aspects of the Gamera Trilogy wasn't enough, Toho would finally turn to director Shusuke Kaneko himself for Godzilla, Mothra, King Ghidorah: Giant Monsters All-Out Attack.

None of this is particularly insulting to either Toho or Daiei. When any studio sees successful attempts from another they try to repeat history in any way possible. It's natural that Toho and Daiei have been ping-ponging ideas in the genre for years. In any case, the Godzilla series' success does owe a great deal to Gamera. It's important to remember that just because Godzilla is King of the Monsters, does not mean it shouldn't acknowledge ideas borrowed from other creature features-- including turtle-like heroes that followed in his footsteps. 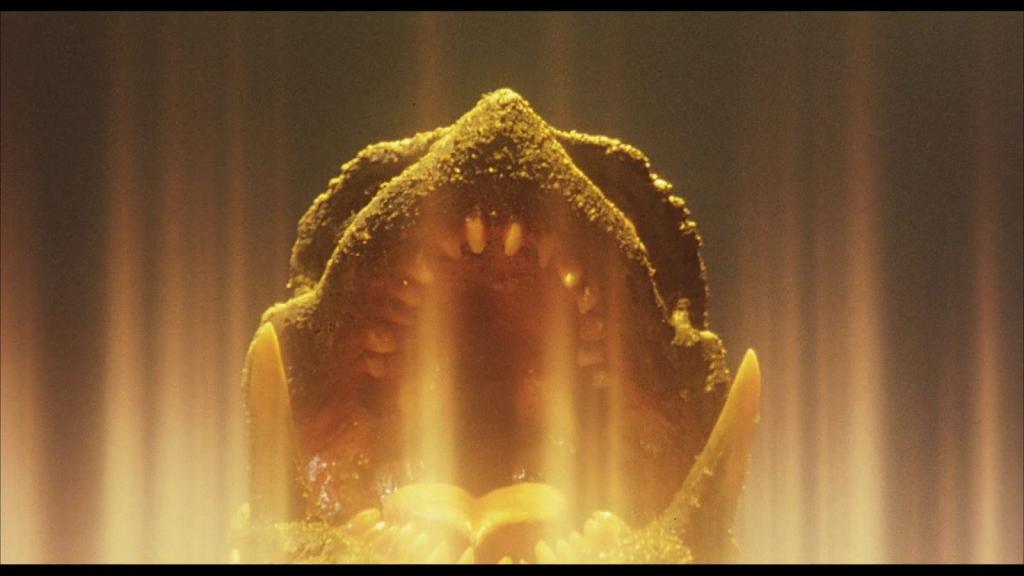 11 Fan responses to Remember When Godzilla "Ripped Off" Gamera?

Very interesting, I didn't know some of this.

Very interesting, I didn't know some of this.

Remember, Gamera is a ripoff of Godzilla.

This Article is Just bullshit. If Godzilla did ripoff Gamera where is the proof? you have these claims with no data. They were going into a new generation of Special effects,  Gamera. the Godzilla Franchise took a different Direction and went into new Effects. If so, Coincidence is not out of the Question. Show me Actual Proof of this being a "Ripoff"

James Inkton,
Fair enough. In David Kalat's book, A Critical History and Filmography of Toho's Godzilla Series, Second Edition, Chapter 18, page 107,
"Tomoyuki Tanaka eyed Gamera vs. Viras with great interest. While it may have been true that the economics of Godzilla, as it was practiced in the 1960s, had collapsed, the Gamera films abandoned the expensive, prestigious, artistic aspects altogether and just made monster action for its most dedicated audience. [Children] Godzilla could survive too--If it followed [Gamera's] suit."

The same book, Chapter 41, also mentions that Shogo Tomiyama hired Shusuke Kaneko based on the Gamera trilogy's innovations to begin with--Once again, trying to follow the same path for success that Gamera took.

I'm sorry for being so rude. In my opinion. I highly doubt that Toho would follow another companies franchise for success, if they did follow it. Some fans will say godzilla is a knockoff of Gamera. In Godzilla vs King Kong. it sorta was Child Friendly and it was before Gamera even started. Godzilla also Fought other monsters before Gamera, he fought King Kong and Anguirus. That is Monster action. In my opinion. I believe the Gamera Franchise started as a Godzilla Knockoff but then started making their own Universe. It's just my opinion

James Inkton,
King Kong vs. Godzilla was a satire. It was open to a wider audience that included children, but was not specifically targeting them like Gamera. Gamera may have started as a "rip-off", but only to an extent. Initially, Daiei wanted to do a kaiju film about giant rats running rampant through Japan, but they switched over to the idea of Gamera instead.

However, Toho saw the success Gamera was having a started following those films' leads to cash in on the same audience.

Of which, again, Kaneko was only hired because of his impressive work on the Gamera trilogy that Toho was hoping to emulate.

I have a theory. the company that made Gamera first saw Godzilla vs king kong and Godzilla 1954, their thoughts were, 'Hey Godzilla is making a lot of Money, lets just make a Ripoff of it', The Gamera series were Starting to copy Godzilla films in order to get success at the box office, Gamera vs Virus: Destroy all Planets is literally a knockoff of Godzilla: Destroy all Monsters, Despite it coming out 4 months earlier, Destroy all monsters has been in production longer than it. The company that owns Gamera wanted to capitalize on Godzillas Success by Copying Destroy all Monsters and Release it Earlier to Make people think it was first. If godzilla was ripping off gamera, wouldn't the Company that owns gamera try to sue them?

James Inkton,
None of that theory checks out or makes any sense whatsoever.

King Kong vs. Godzilla couldn't have inspired Gamera because Daiei initially had planned a movie about giant rats attacking a small island and its livestock, called Giant Horde Beast: Nezura. The movie was cancelled, leaving a gap in their schedule. They needed a new giant monster.

Allegedly, the idea for Gamera came to the President of Daiei Studios on a flight back from America. He claimed to have seen a cloud shaped like a turtle and told his studio to make a turtle fly. This was many years after King Kong vs. Godzilla and they hadn't even decided what their target audience would be yet.

Godzilla was "ripping off" Gamera's direction, just like Gamera was "ripping off" Godzilla's general concept of a kaiju film series. Neither one could sue each other because there were no legally protected rights, designs or other variable that was being stepped on. After all, why didn't Toho sue Daiei?

Lets end the Argument here. Ripoff or not, they both are very similar, I just do not have any decisive evidence to say Godzilla "Ripped Off" Gamera, I Book and Article is just not enough to prove this whole thing. Anyways, Its been nice talking to you! Bye!

How about multiple books? Because they all explain the same thing: Tomoyuki Tanaka wanted to follow the same path as Gamera and he did. Japanese and American book sources prove this.