With only a handful of marketing having been released thus far and with the July 15th release date just over a month away it really comes as no surprise that Paul Feig's Ghostbusters reboot is increasing its media presence. Unfortunately, it seems that Sony Pictures Entertainment has no issue with continuing to market the movie by abusing the opinions of anyone who has aired a negative stance towards the movie. Despite that since the trailers were released a growing number of everyday moviegoers and fans have been turning away from this socially zealous movie, director Feig, his cast, his friends and his colleagues have continuingly ignored public opinion, instead blaming the misogynistic views of a vocal minority for the continuing negative opinion towards the movie. Together Feig and co. have drummed up more negative press towards their movie than the sexist internet trolls could have ever dreamed to. 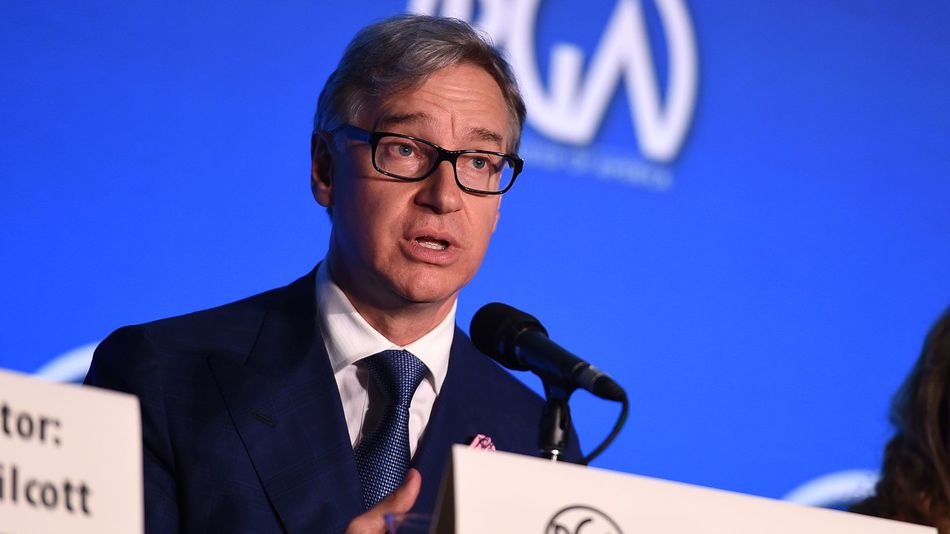 Speaking this weekend at Sony's Produced By Conference Feig (pictured above) again defended his decision of casting Saturday Night Live regular Leslie Jones as the groups only non-scientist...

“I feel bad that many have taken a bad look at Leslie Jones’s character. We originally wrote it for Melissa [McCarthy], and then when we were putting it together, we figured Melissa had played a role like that before. Leslie is so funny at playing this kind of a character that we put her in there. I am the first to admit, while I am a fighter for women, my record for diversity has not been as good and I take responsibility for that.”

While I will be the first to commend the director for admitting his failings, when looking back at the first trailer I wonder how many calls of racism there would have been if audiences had seen McCarthy forcefully slap Jones across the face while bellowing "The power of Patty compels you!" 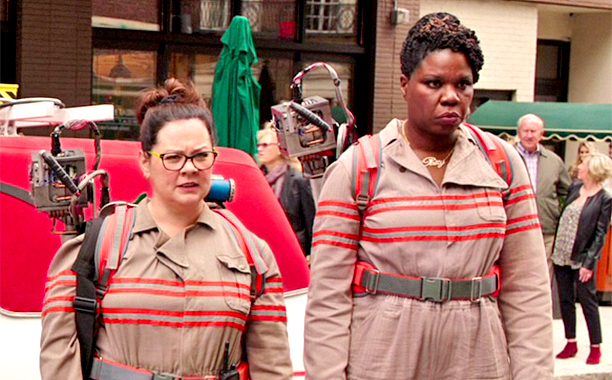 Ironically Feig states that McCarthy (pictured above left) had already played a similar role to that of Patty Tolan, while also stating that he chose Leslie Jones (pictured above right) for the role because she too had already played a similar role. I know Paul Feig once stated that he intends to make McCarthy a star, but his reasons for casting Leslie Jones in what is essentially a female 'Winston Zeddemore' role shows just how little imagination went into the creation of the movies characters. Jones could easily have remained onboard as one of the scientists if Kate McKinnon or Kirsten Wiig had been cast as the blue-collar subway transit worker; which would have been a commendable casting decision that would have also allowed the reboot to stand out, rather than just creating female counterparts to the original group. At the conference, Feig continued by calling out his fellow directors for their lack of imagination when casting women in movies...

“Guys have an image of women and since guys make so many movies, their take on women goes into movies. That take on women is mainly mom, girlfriend …they get their revenge through movies, you see it in these characters. It’s this self-perpetuating thing because very few people have been creating roles for women on the screen.”

“I had some male producer say, ‘Oh boy, get ready. It’s going to be tough, you’re going to have catfights,' And I said, ‘Who the f— are you?’ It was the most wonderful experience I’ve had,”

While part of me wants to agree with Feig, with directors like Michael Bay never shying away from depicting his female characters in the same way he depicts cars in his movies; as little more than eye candy, Hollywood has, since the 1970's, brought us some of the most powerful depictions of strong female characters across a wide range of movies that include Ellen Ripley (Sigourney Weaver), Clarice Starling (Jodi Foster), Erin Brockovich (Julia Roberts), Sarah Connor (Linda Hamilton), Princess Leia Organa (Carrie Fisher), Furiosa (Mad Max: Fury Road), Katniss Everdeen (Jennifer Lawrence), Rey (Daisy Ridley) from Star Wars: The Force Awakens and no doubt many, many more (will likely be mentioned in the comments). In an age where everyone with an opinion is calling Hollywood for sexual bias and whitewashing when casting roles, it is ironic that directors and movie studios are pushing past those criticisms with actors like Samuel L. Jackson and Lawrence Fishburne cast in roles intended for a caucasian actor, Tilda Swinton cast in a role intended for a male actor and controversial action packed movies like Zero Dark Thirty and Fox TV's premier show The Walking Dead being helmed by women (Kathryn Bigelow and Gale Anne Hurd, respectively, pictured below with ex-husband James Cameron). 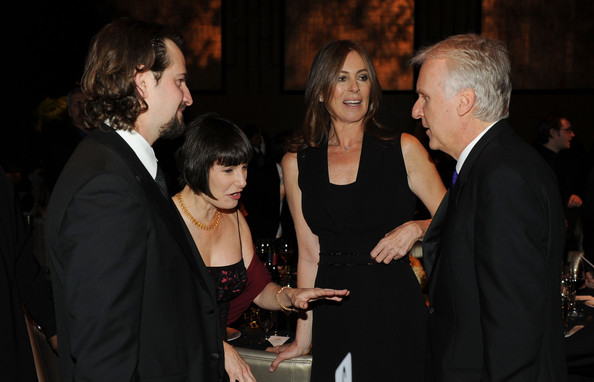 Director Feig wrapped up his comments at the Conference by turning the blame for the negativity towards his movie from the fans and Hollywood toward those within the media...

“It’s my fourth film and we are struggling every day to go against that bias. We still get called in the press as a ‘chick flick.’ We are always referred to as ‘the all-female “Ghostbusters,'””

Bridesmaids (pictured below), The Heat, Spy and the all-female Ghostbusters. The first three movies of Paul Feig's directorial filmography are comedies aimed at and starring a strong, majority casting of women; ergo chick flicks. And, as I have mentioned numerous times before a script was written and a cast was imagined Feig proposed to Amy Pascal in August of 2014 his desire to reboot Ghostbusters by genderswapping the leading cast, as is his gimmick; ergo all-female Ghostbusters. With each new comment, Paul Feig is beginning to exude an air of sheer arrogance. He set out to remake a classic family comedy into a socially charged spoof of the original movie aimed at a primarily female audience. From its conceptualization, this movie was intended to offend, especially after the long-proposed sequel was sidelined by Pascal in favor of this reboot. 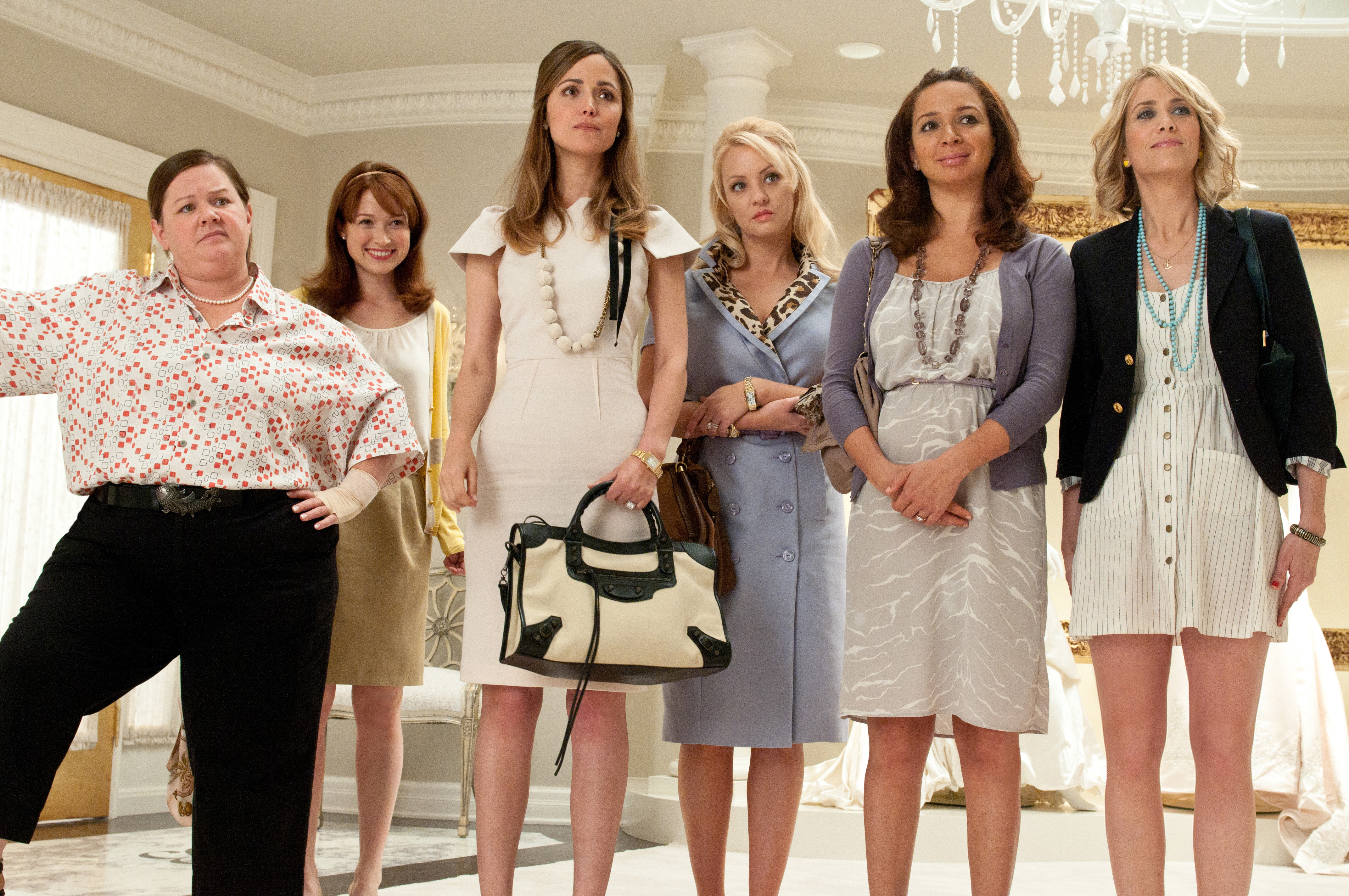 The majority of female movie audiences, be them fans of the 1984 original or not never asked for their own version of the movie. In fact, most average movie audiences considered the Ghostbusters franchise dead in the water with only fans and stars of the original (with the exception of Bill Murray) rallying for a third movie in which the proton packs would be handed on to a new generation of busters by the surviving members of the old team. Hardcore fans like myself even hoped for an exploration into the Barrett family curse, with the two previous paranormal outbreaks only occurring when Dana was in town, and circling around Dana herself.

Nobody requested this reboot, and from what we've seen thus far in trailers and featurettes, the choice of marketing the director, cast and studio have used to promote the film, the rumors of NDA's and threatened liability suits and how this reboot came to be greenlit shows a complete disregard to the fan base, movie audiences and the cast and crew of the original movie.

GAVIN SINGLETON - I am not surprised by this. Mr. Feig strikes me as a little twerp with an ego issue. Regardless, you have made many exceptional points I this presentation!

Feig at it again I see. Can't stand the heat, stay out of the kitchen.

They should've made it have more substance & a true purpose as a standalone movie; not just cop out with gimmicks that no one asked for in the first place >,>

the best way to watch this is to watch the visual "Paul Feig version" with no sound, then play the "1984 original ghostbusters" audio sync ..even if it doesn't land, it will be amusing...this could work vice versa... to ubsorb the entire experience....  try "the power of pam compels you! (during statue of liberty scene gb2)