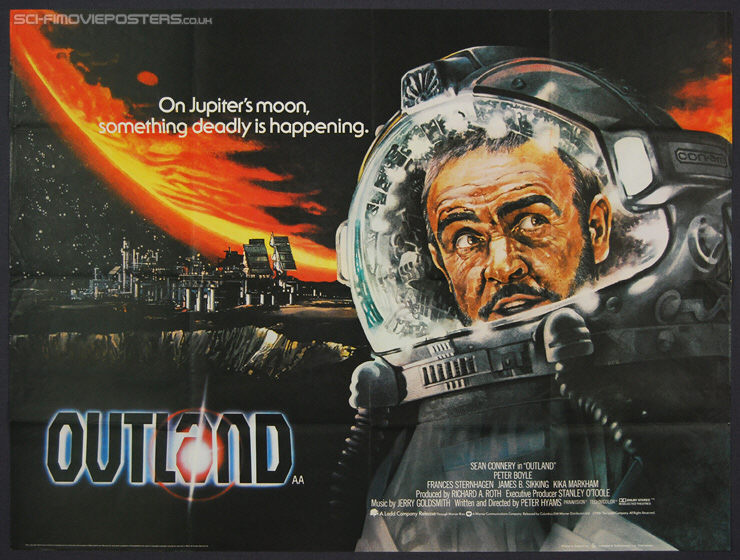 Tagline: Even in Space, The Ultimate Enemy is Man.

Written, scripted and directed by Peter Hyams, Outland was released in 1981. In essence, the story is loosely based on the western classic High Noon. Indeed Hyams originally envisioned the story as a period western, but the success of films like Star Wars and Alien convinced him to move the setting to Space.

Highly enjoyable, but sadly under-rated, I can’t remember the last time it was shown on TV, here in the UK. It appears to have been forgotten, although Warner Brothers finally released the film on Blu-ray in 2012. 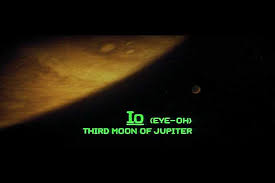 Federal Marshall William T. O’Neill, {Connery} arrives to take up his post at Con-Am 27, a remote mining facility on Jupiter’s third moon Io. He is met with company corruption and hostility. His sense of morality means that he won’t turn a blind eye to the fact that a super amphetamine is being pushed onto the workers, as a means of increasing productivity. The drug drives them to the edge of sanity and causes them to hallucinate, become psychotic, and ultimately die in horrific, explosive, decompression suicides. It takes around 11 months before these side effects begin to manifest, just before each worker's one year tour comes to an end.

O'Neill and Dr Lazarus {Frances Sternhagen} are suspicious about the deaths, which have been treated as nothing unusual. They decide to look into it and Lazarus analyses a blood sample which O'Neill has taken from one of the dead workers. She realises that it's a powerful, non standard drug, and they know it's being illegally shipped in. Sheppard, {Peter Boyle} the mining colony boss, tries to buy O'Neill off, telling him to name his price, but when this fails he lets O’Neill know that he is a dead man. Finding no-one brave enough to help him, O’Neill is left to face the soon to arrive hired killers, who will be on the next shuttle. There’s a real feeling of paranoia and suspense as the clock in the docking bay counts down to its arrival. The outpost’s gruff, smart, female doctor, Dr Lazarus is the only person in the facility who turns out to be O’Neill’s ally.

The film has a gritty, realistic, plausible feel. There are no plasma weapons or warp drives. Instead, Hyams creates a seedy, claustrophobic working environment, it could just as well take place on an oil rig and reminds me of the Nostromo from Alien. The sets look great. Very low-key, this bleak environment allows the characters to take centre stage. Connery and Sternhagen are superb in their scenes together. there's a real dynamic between them. Peter Boyle is coldly calculating in his role as the corrupt, matter-of-fact Sheppard. The action moves outside the facility, to the giant walls of the greenhouse and solar panels for the final suspenseful showdown, between O'Neill and the killers. Just when it looks as if he is safe, it turns out he has an enemy from within his own deputies too.

The visual effects are pretty damn good too. There’s a couple of exploding heads- one inside a helmet, and one unsettling elevator/air-lock death. The miniatures still look convincing and the front projection shots, use Introvision to great effect. This unlikely blend of space western, and detective thriller just works. I’ve always had a soft spot for it and cannot understand why it has been so overlooked.

Interesting trivia: The first character to die is called Cane! Like Alien, the soundtrack is by Gerry Goldsmith. Some of the Miniature Effects are by Martin Bower who also worked on Alien. There's a character called 'Sagan' and another called 'Ballard'. Hyams also directed Capricorn One and 2010.

This post is dedicated to my Dad. Sean Connery was one of his favourite actors, and he loved Outland. We would spend hours together, watching and talking about films. If there’s a Cinema Heaven, I know, one day I’ll be seeing you there Dad!

One of my favorites too.Thanks for posting this.It is overlooked.

The main model makers were two kids fresh out of high school.They brought in the shuttle and another miniature(that would later be used as a piece of the refinery)and were hired on the spot.They didn't even know what the story was about.They were just showing the studio there work :) 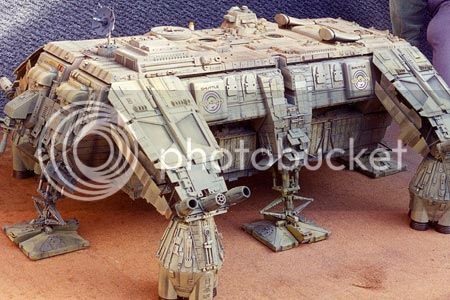 I completely agree, Outland is a very good movie. The sets were great, dark and claustrophobic, sort of reminds me of alien. Very good indeed.

I remember this movie and i liked it! Gonna watch it again, thanks LONE!

One interesting note of trivia, is that the production crew for the film purposely went out of their way to unoffically make everything you see connected to the ALIEN (1979). And if as it was set in the same universe, even the floor panels from the Nostromo were reused. The end result was of course quite good, if not the best I'm seen to date, even when comparing the ALIEN series sequels.  My Father was also fond of this one, too, and Sean Connery was one of his all-time-favorties.

OUTLAND still holds-up very well, and is very relavant today, with the drug being pushed on the station having many similarities to Crystal Meth (and it's effects). And the Blu-ray release looks fantastic.

HEAVY METAL (US) Magazine ran the the six-part comic adaptation from Jun-81-Jan-82. And done by
Jim Steranko, of which also did the cover for the BLADE RUNNER adaptation (large-page + pocketbook editions).