In a world of motion pictures increasingly dominated by CGI-fueled, gimmicky, and often derivative stories, hollow plots, and stereotypical characters (especially in the horror genre), the question arises… what happened? Where did the days of imaginative, original horror characters portrayed via practical effects (like the Alien, the Predator, and the Gillman from Creature from the Black Lagoon (1954)) go, and why aren’t films like this made anymore? It seems that today’s horror landscape is filled with found footage, retread plots, jump scares, and an abundance of GC creatures that, while certainly not universally ineffective or unmemorable, lack the sense of reality and tangible horror of the film monsters of yesteryear.   Even with sequels to the Alien and Predator franchises, and a remake of Black Lagoon, in the works, it is likely that these films will feature a fair amount of CGI in their respective creature work. Will there ever be a return to the style of filmmaking that made those previously mentioned films, and many others, so memorable, endearing, and truly terrifying? 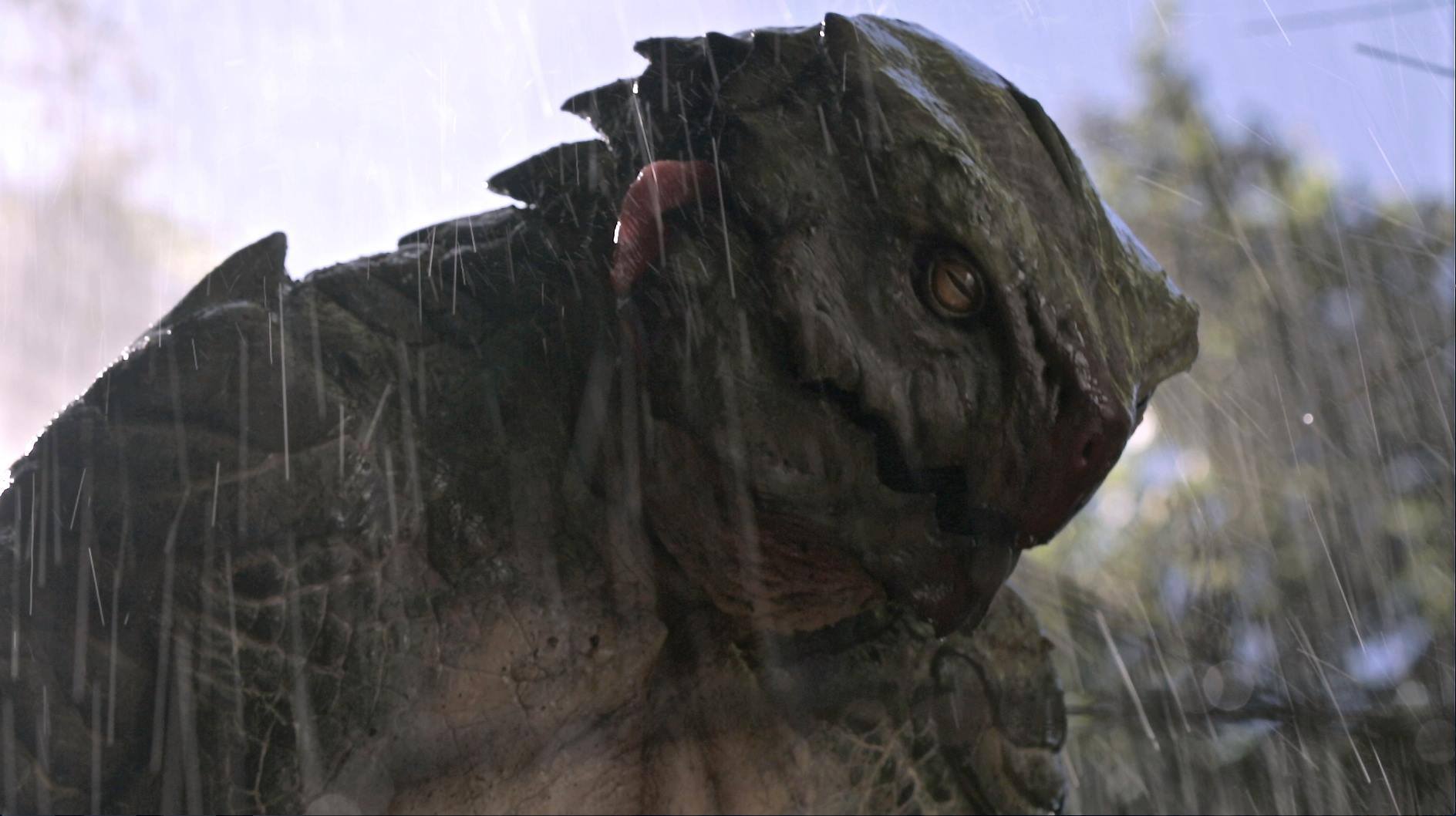 Ladies and gentlemen, meet the terrifying new creature that might just become the next iconic movie monster… the TIBURONERA, or “he who hunts sharks”. Drawing inspiration from those aforementioned movie creatures, but featuring a stunningly original and unique design, this fully practical monster harkens back to the days of creatures like the Alien, the Predator, and other characters like the Thing and Pumpkinhead. It is, you might say, “old school” at its finest. This new monster is the creation of veteran creature designer and short film director Sandy Collora, famous for directing the legendary short film Batman: Dead End, which earned unprecedented critical acclaim and is revered by many fans as one of the greatest Batman stories ever put to film, despite it being a “fan production”. In addition to being a comic book fan, Collora is a hardcore monster fan, and with the help of Kickstarter, has published several books on creature design. Last year, in a bid for creative freedom and an attempt to bring back the genre of monster films that inspired him, Collora launched a Kickstarter campaign to create a feature length film called Shallow Water, which would introduce the Tiburonera creature pictured above, and simultaneously pay homage to classic creature films and tell a truly terrifying, dark, gritty, and intense story unlike anything being created in Hollywood today. As Collora himself put it, “If Hollywood won't do it, I will.” 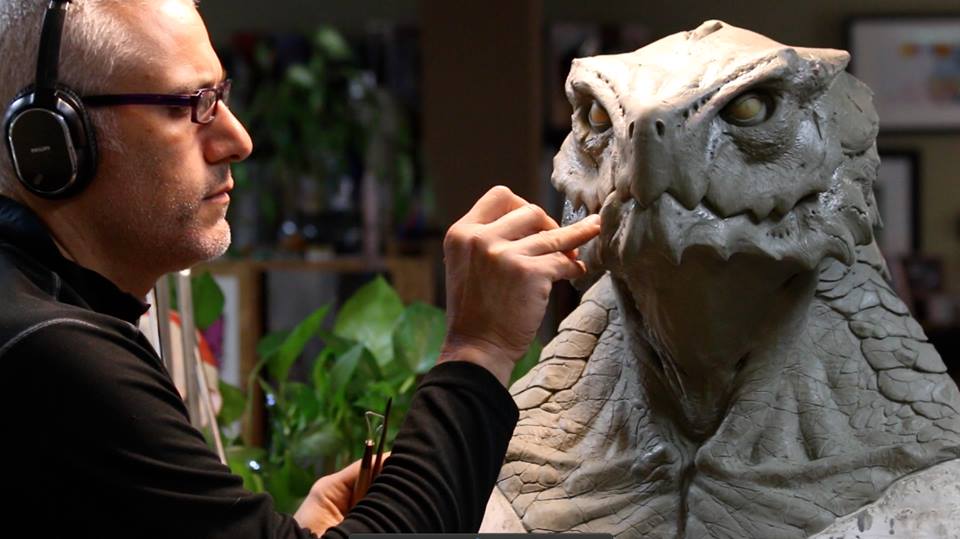 An innocent adventure: a fishing trip to a remote and mythical fishing hole goes awry and becomes a terrifying predicament that keeps getting worse. Nestled deep in the Sea of Cortez is a tiny island you won't find on any map. Six fishermen scour the Baja peninsula to find this magical place, but when they finally reach their destination, they encounter some sea life that they did not expect. This puts them all at odds and it quickly becomes every man for himself. Which will prevail, Mother Nature or Human Nature?

Unfortunately, despite a strong initial showing and exciting rewards and incentives, the campaign failed to receive enough funds, and Shallow Water, it appeared, would never see the light of day. However, Collora was not done with his passion project yet. After a reassessment of the project from the ground up, the Tiburonera returned for a second attack last month, when a second Kickstarter was launched. This time, Collora had a different concept in his head… with a more modest goal of $85,000, he is attempting to create Shallow Water as a short film, about 25 minutes in length (around the same length as the average TV episode).

However, this time around Shallow Water will only be part of a much larger conception. Over the next few years, Collora hopes to launch a series of Kickstarter campaigns to each fund a new, original short film. Each will be unique and unconnected to the others, featuring stories unlike anything ever seen before and filled with practical effects, science fiction, fantasy, and horror, and of course, amazing creatures and monsters. It is Collora’s goal to ultimately assemble these films into a single, feature length anthology film that will showcase practical effects and a creativity that Hollywood no longer employs in its multi-million dollar blockbuster productions.

With a little over two weeks left in the campaign as of this writing, and just over $45,000 raised so far, the Kickstarter is off to a strong start, but still has a long way to go to reach its goal. The team is offering a number of exciting rewards to backers of the project, including the obligatory posters, tee shirts, and DVD/Blu-ray of the finished film. (A perk is in the works for backers who back all subsequent shorts to receive a DVD of the completed anthology film.) In addition, the team are offering a hardcover art book with production images and concept art, an old school Kenner style articulated action figure of the monster (think Funko’s Re-Action line of packaged figures), maquettes and busts, a chance to participate in filming and/or a creature design class with Sandy Collora, and even a chance to own the ACTUAL MONSTER SUIT used in the film! For a full list of perks, as well as a wealth of information about, and exciting images from, the production of Shallow Water, head over the Kickstarter page, and if you are able/so inclined, consider pledging to the campaign. You will be helping to bring back the genre that birthed some of the most iconic creatures, stories, and worlds in motion picture history, and who knows… maybe even send a message to Hollywood that THESE are the kind of movies we want to see. 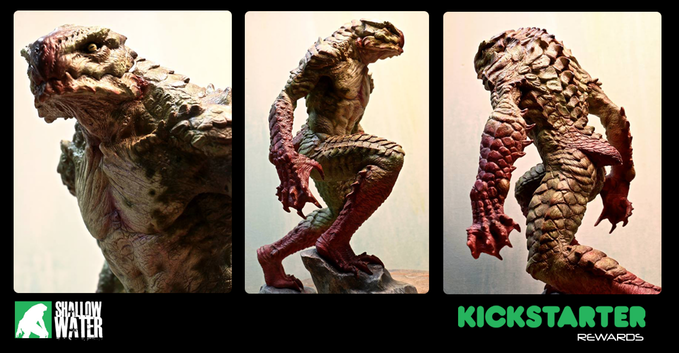 So, what do you think? Are you intrigued by Shallow Water? Do you think the creature has what it takes to stand toe to toe with cinema’s iconic creatures? Will you donate to the Kickstarter campaign to make this film a reality? Let us know in the comments section below, and be sure to keep it locked to Scified for more news on the movie, and on any and all developments in the world of science fiction, fantasy, and horror cinema.

DANZILLA - First and foremost, it is extremely fantastic to see you once more, my friend! The film concept and work you have presented is exceptionally compelling! I will certainly look into this with fervor! Thank you ever so much for taking the time to share this with us! :)

Great article! I love indie film, and I actually have one of Sandy Collora's creature art books. This is the right guy to do this, and I am going to check out the Kickstarter. I really think the point you made about retreads and sequels is true. It's understnadable because a sequel is less risky to the studios who are sinking big $ into big productions. But it's not good for fans that want to see something truly new. Kudos to Sandy for taking aim at something important and to Scified for covering it.

Looks like the Creature from the Black Lagoon! Love it!