It's hard to believe this year marks a fill decade since Christopher Nolan kicked off the greatest superhero trilogy in motion picture history with Batman Begins. Starring Christian Bale as the Caped Crusader, the film ushered in a more realistic, grounded take to Bob Kane's timeless crime fighter and eased the pain of 1997's Batman and Robin... slightly.

To commemorate ten years of Batman Begins, NECA is preparing to release a Quarter Scale figure based off Christian Bale's Batman! This is a figure fans have been waiting for. A figure that was revealed today from the floor of San Diego Comic Con!

Check it out below!

Batman Begins marks its 10th anniversary this year, and we’re commemorating the occasion with an impressive new 1/4 scale action figure based on Christian Bale’s portrayal of the Dark Knight.

Batman stands over 18″ tall and features an authorized likeness, a soft fabric cape and movie-accurate detail (like the hidden compartment in his boot heel that stores a sonar signaling device). The figure is loaded with accessories, including grapnel gun, large hinged Batarang, small Batarang, open and closed mines, sonar communicator and two pairs of hands. 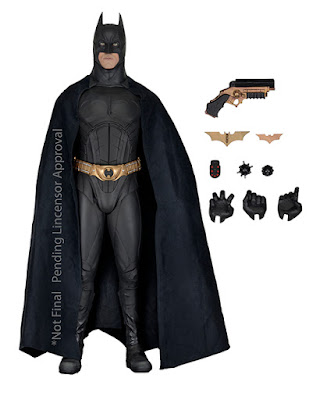 Look for the Quarter Scale Batman Begins Batman figure to aerie from NECA this November!