Having covered the news on Ghostbusters for Scified since the sad passing of the franchises co-star and co-creator Harold Ramis and having followed the news for many, many years it amazes me that the supporters of Paul Feig's reboot are continually referencing the misogynistic views of a vocal minority in an effort to show support for and market the movie. Following comments from Sony's domestic marketing president Dwight Caines, and the movies "main star" Melissa McCarthy, via popular site Uproxx we now have the comedy director Judd Apatow, a friend, and collaborator of Feig's also playing down the negativity towards the movie...

“I would assume there’s a very large crossover of people who are doubtful Ghostbusters will be great and people excited about the Donald Trump candidacy. I would assume they are the exact same people.” 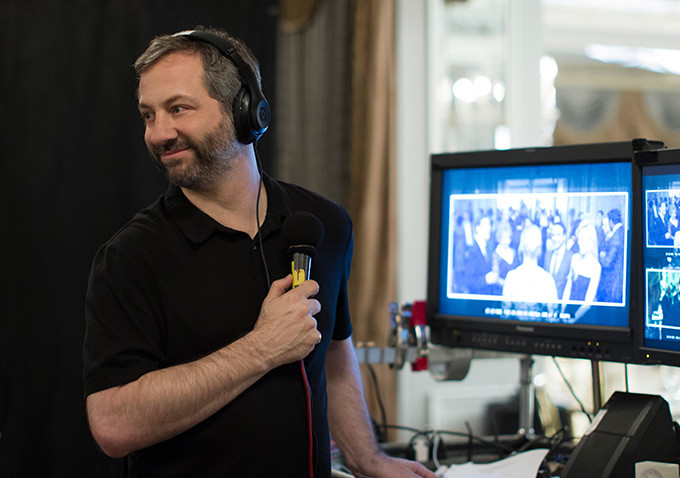 “That movie is made by the great Paul Feig and stars the funniest people on Earth, so I couldn’t be more excited. I think people have paid too much attention to just some angry trolls. And it will be judged on its own greatness. I don’t think anything really matters the way you think it does. The movie comes out, and it will be great, and people will just be happy to have it. It’s not like anybody really cares about a couple of idiots who hold onto the idea that things never evolve. I always think, you know, we have our past and if you can come up with a new, cool way to do something, then that’s exciting, and hopefully it will make a lot of people happy.”

The sexist haters that are repeatedly mentioned did voice their toxic opinion when news of Paul Feig's involvement was confirmed back in August 2014, but since the release of the first trailer those haters have been silenced by the overwhelming opinion of the fans, critics, and general audiences. The movie does have some supporters outside the overzealous feminists whose socially charged defense of the movie has been as toxic as towards anyone with an opinion as the misogynistic haters, but even their rhetoric cannot be silenced by the growing public disillusionment with this ill-conceived and ill-marketed movie.

The low opinion of the recent trailers, the shambolic attempt to market the movie (including of all things an advert for the Karcher pressure washer and the above promo for the NBA finals) and the actual lack of support for the movie from even the cast (with nobody outright claiming the movie to be any good) is justification that this movie should have never, ever have been greenlit. The fact that is was greenlit by Amy Pascal based on little more than a hastily written email by Feig over a sequel developed over the course of a decade by the original creators, cast and director are for me, the primary reasons for hating this movie.

Of course! Because having an opinion automatically means you're misogynistic, or racist or sexist nowadays. LOL They made a terrible looking movie, they'd just rather blame their audience who *cough* pay their salaries than admit to dropping the ball. Good stuff. Let's see how well this goes for them at the box office.

Ive not seen it and maybe its a movie i would go and see as my Local its only £4.50 so little excuse but it has not got me excited but maybe its old Age because i felt the same with TMNT.

I think people should give the movie a go and judge it on its own Merits, yes it has Women and yes maybe if it had a bunch of really attractive Women with Chest Busted out their Bras maybe the guys who moan because the Ghostbusters are Women would not moan so much then ;)

But they wanted to make it more real as far as cast, as well the Original Ghostbusters where not Chip'n'Dale Dream Boys was they.

So i think the company took a risk,  they grew some Balls and gave it a crack.... and to be fair would even a all Male Ghost Busters had worked?

I think Fans are Nostalgic and would wanted to see at least a few of the Original cast return in a bigger main role like Star Wars Original Cast...

Star Wars has done this, and it would be interesting to see if EP8 would lead to a EP9 where none of the Original cast from EP4-6 play a role.. and hope that they new Characters can be built up in time for that..

So Star Wars tried to cast a female lead... and it got some Negative Reception but i think having a Female lead is not a bad idea.

But everyone is entitled to their own opinion and the BIGGEST problem retro movies have is when the Originals are so iconic its hard to re-create and live up to the expectations.

Let me get this straight: despite the fact that I am a woman, my dislike of this film's premise and casting makes me misogynistic? How interesting. Oh, and look at how a Donald Trump reference was thrown in. Extraordinarily classy. Your film embodies exactly what is wrong with hyper PC culture and you lash out against the political climate your views have helped to create. I am reminded of Heracles raising a fist as he shouts at the sun for being too hot after he knowingly strode forth to do battle on boiling-hot day - only I have more sympathy for the foolish Greek hero. What rubbish.

CHRIS PICARD - Exactly. Such individuals are intellectual bullies; nothing more. Let the wail and rant. I will not be moved.

You're in a desert, walking along in the sand when all of the sudden..

I hope the movie does decent, i would hate for it to do poor and then having people say "see thats what you get for casting women"

Time as moved on and its hard to live upto the Original, i think a sequel may have worked better 15 years ago?

But even if the cast was all Male i think it would always not please everyone...

i am going to watch it with a open mind and judge it at face value and well we have so many movies released that are over done to extream i.e Glee style movies, and American Pie style and so well.... what the harm in watching Ghostbusters 2016 with a open mind.

BIG DAVE - I understand and whole-heartedly respect your standpoint. Please understand: I greatly enjoy strong female leads in film. Just look at how much I adore Ripley! However, I do not agree with forcing certain agendas by supplanting original characters with their opposites. How would any us feel if FOX announced that they were going to remake Alien and change Ripley's character to a man? Would that be fair to the story? As a woman, I am all for equality in film roles; but I say we should make new roles that will come to be loved rather than stand upon existing stories. :)

Ripley was written as a man.

If Alien was remade with Ripley as a man, it wouldn't change one frame of the existing four files where she's a woman.

Sorry but what does misogynistic mean?

S.M - I respectfully disagree. Changing Ripley to a male character, in my opinion, would undermine how her character and journey evolves. She is a mother who loses everything only to be given the chance to have a child once more. She evidences that a woman can survive through determination just as a male counterpart. There are many more instances throughout Ripley's story arch that set her apart from a male role.

None of that changes or undermines the existing Ripley as portrayed by Weaver.

This would be a new male Ripley on a different journey.

Didn't Dan Aykroyd say the movie had more laughs than the original, in a recent interview? Granted he has a vested interest but still

@Durp, indeed I heard that as well. My next question was "how much was he paid to say that?" Lol

S.M - I am somewhat uncertain of your stance. Please clarify. :)

A remake is precisely that - a remake. It doesn't change the original. Peter Jackson's King Kong doesn't change one frame of the Coopers original. It's just a different take on the story, with Ann and Jack rewritten.

An Alien remake with a male Ripley would stand alone separate from the original, and therefore doesn't change anything about the original.

S.M - Oh! I see your point! Hahaha! Thank you ever so much for clearing that up for me. It is greatly appreciated. :)

Yes. You're in a desert walking along in the sand when all of the sudden you look down

How many movies from franchises aren't aimed at fans pockets?

It's obviously done to make money. And the better it is, the more money it's likely to make.

I don't know if it's quality or original though, since it hasn't been released yet.

Maybe you're fed up, maybe you want to be by yourself, who knows? You look down and you see a tortoise, Leon, it's crawling towards you

The misogyny that has accompanied this right from the outset, has made legitimate criticism impossible.  If you think it's good you're "politically correct"; if you don't like it you're a "misogynist".

The tortoise lays on its back, its belly baking in the hot sun beating its legs trying to turn itself over but it can't, not without your help

BLADERUNNERGUNNER and S.M - The very fact that we can engage in civil dialogue with regards to this film while maintaining separate viewpoints is proof that there are individuals willing to think beyond the norm society is attempting to impose. I am quite pleased by this. :)

They're just trying to make the haters look like *******s.  And this is turning into the same argument over Jurassic World...