Kodi Smit-McPhee whom co-starred with rising starlett Chloe Grace Moretz in the 2010 horror movie Let Me In can be seen later this year joining Andy Serkis, Gary Oldman, Jason Clarke and Keri Russell in director Matt Reeves eagerly anticipated sequel to 2011's hot reboot Rise of the Planet of the Apes! recently Collider caught up with the young actor and quizzed him about the upcoming movie... 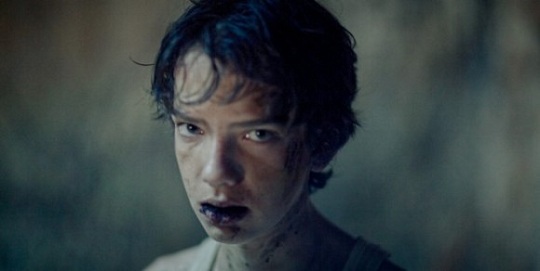 How was the experience of making Dawn of the Planet of the Apes?

SMIT-McPHEE: I haven’t done a lot of studio movies, but studio movies and independent films are always just as fun as each other.  As long as it’s a quality story, it’s always filled with the same amount of love for the project.  I think indie films have more of a fresh, experimental vibe about them, whereas studio films know what they want and can basically get it.  It’s the same amount of fun, but different spectrums of the art itself.

It must be so intimidating to be a part of a film of that size.

SMIT-McPHEE:  Oh, yeah.  There’s just so many people.  Everything is multiplied by a million.

Did it help that you already had a working relationship with your director, Matt Reeves?

SMIT-McPHEE:  Definitely.  That was awesome.  On Planet of the Apes, it felt like a camp to be there with Matt again, and to be with great people like Jason Clarke, Keri Russell and Gary Oldman.  Obviously, Matt Reeves being there played a big role in me getting the part, but I did have to audition, as well.  I was in South Africa shooting Young Ones, and Matt gave me the call on Skype and told me the news that he was directing Planet of the Apes.  I was over the moon.  So, I did an audition and sent it, and the next day, I was told I got the job.  It was awesome.  It was so great to be on it.  That whole experience was unbelievable.  I can’t wait until it comes out.

Have you gotten to see any of it yet?

SMIT-McPHEE:  Only what the public has seen.  That’s a big thing with studio films, as well.  They’re very strict with their secrecy.  I can’t wait to see everything with it.

What was most surprising to you, in regard to making that film?

SMIT-McPHEE:  To tell the truth, it really wasn’t a shock.  It’s just a different way of doing it.  But, it was the same kind of experience.  Everyone has the same passion for it.  It’s just bigger.

The Planet of the Apes series is getting another reboot! This time, director of The Maze Runner, Wes Ball will be at the helm! According to reports the new Plant of the Apes movie(... Read More

Rumors swirled around during 2017 that the latest film in the Planet of the Apes franchise would be its last. But recent reports indicate that another film is incoming and one that... Read More

Planet of the Apes: Last Frontier recently debuted on PS4 to moderately positive reviews. The game was developed by The Imaginarium, a VFX production company co-founded by Andy Ser... Read More

In a fortnight's time, the third movie in 20th Century Fox's critically acclaimed Planet of the Apes reboot series will explode into theaters worldwide. According to early rev... Read More

0 Fan responses to Kodi Smit-McPhee Talks About Dawn of the Planet of the Apes!