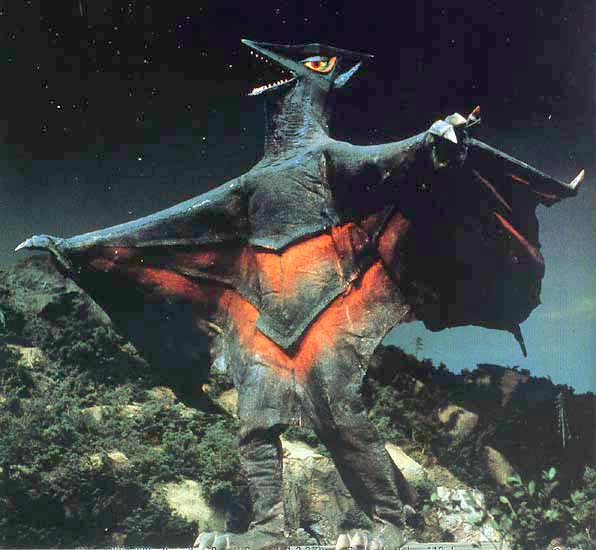 Gyaos is the main villain in Gamera vs. Gyaos. Gyaos emerged from a moutainside and wrecked havoc throughout the city. As expected he and Gamera clashed. At first, Gyaos seemed to panic and flew off, leaving part of his foot in Gamera's jaw's. Soon, it is discovered gyaos hid due to a weakness to sunlight. A plan was divised to keep Gyaos out in the light long enough to kill it. At first, the plan fails miserably. But luckily, Gamera arrived to save the day. Gyaos managed to slice thrpough Gamera's arm with its ray and injured him, but Gamera eventually overcame Gyaos and won. The battle ended when Gamera, in daylight, pulled Gyaos into a volcano.

Gyaos was a fan-favorite character quickly. Gyaos later appeared in Gamera vs. Guiron, which I will cover soon. He/it was also a key player in the Heisei Gamera trilogy.

Gamera vs. Gyaos is available on a two-pack with Gamera vs. Viras from Shout! Factory. Carnosaur was a film made to make money off the the dinosaur genre. With Jurassic Park coming soon, this movie was released only two weeks before it. The description, as accordi... Read More