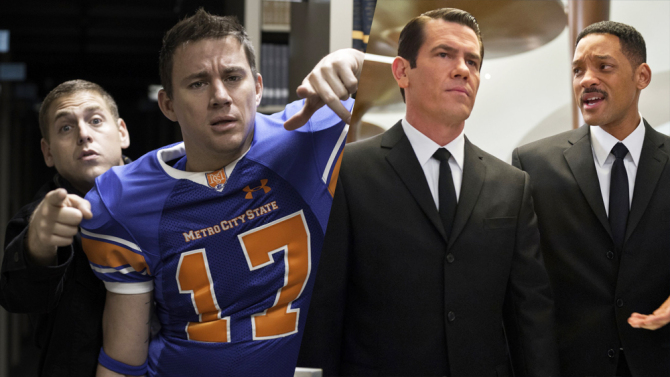 Last year, it was revaled that Sony Pictures planned to make a 23 Jump Street/Men In Black Crossover. However, details remained scarce except for the possibility that it might not come to fruition. However, Variety recently learned that not only is the movie going to be made, it will have a new director:

"Sony Pictures plans to move forward with its “23 Jump Street-Men in Black” crossover movie. Sources tell Variety that James Bobin is in early talks to direct the film for Sony. Studio sources say that while no official greenlight has been given, the studio is already eyeing a June production start date. Sony had no comment. Bobin will be stepping in for Phil Lord and Chris Miller, who directed the first two pics but are unable to direct the crossover due to their commitment to the “Han Solo” pic they’re helming at Disney. Lord and Miller are still on as producers along with Neil Moritz. Jonah Hill and Channing Tatum will return to reprise their roles as Jenko and Schmidt, respectively. The two are also producing.

As for Agent Jay and Agent Kay, execs have already made it clear Will Smith and Tommy Lee Jones will not be reprising the roles they made famous as the studio looks to use this film to relaunch the franchise with younger, fresher faces. With that summer right around the corner, these roles are likely to become two of the most coveted roles in town given the A-List talents the actors would be replacing.  Sources now say Rothman has delivered the script and the studio is pleased with it. Plot details are under lock and key with only a few copies of the script available; most people have to drive to the studio to read the script if they have any interest in pitching their client to direct. While several directors met for the gig, sources say Bobin has been a favorite for some time. Bobin cut his teeth as one of the exec producers and directors on HBO series “Flight of the Conchords” before landing the directing gig on “The Muppets” movie.

The news of a new Men in Black Movie was announced a while ago, but lately there have not been any new developments. Variety has learned however not only that the newest movie is being green-lit, but also that it will be a crossover with '21 Jump Street'. The information regarding this crossover will be reproduced below to highlight the relevant bits.

The Variety article is filled with incredible insights as to the movie. It is regrettable that Will Smith and Tommy Lee Jones will not be returning to the roles that they made famous in the original trilogy. However, the concept of Men in Black means that many new agents can concievably take the place of the originals or that the movie can be centered around all new original characters.

It is also encouraging that Sony is pleased with the script. However the two worlds are still incredibly disparate, so this crossover remains very ambitious. Hopefully Sony can integrate them into the world believably. The production date is also close, so hopefully some additional casting news regarding the leads will appear soon. Let us know what you think in the comments!