The jokey-xenomorph, also known as the Ultra-Morph, is a Xenomorph born from a space jockey, the jockey-xeno is 10+ feet tall, bigger than the normal drone/warrior xenos and the jockey itself.

the jokey xeno has a similar color that the runner-xeno, and can impregnate other species with jokey-xeno embryos that don't change regardless of their host; as the chestbuster is impregnated within a phase in witch he is already too developed to change, the jockey-xeno puts the embryo in a victim were he can complete his life cycle and feed freely, because while he is inside the jockey-xeno he refrains from eating, this chestbuster is born after one hour and he has the ability to spit acid.

The jockey-xeno can also impregnate othe xenomorphs and is inmune to the hypnotic power of the queen, when there is more than one jockey-alien the stronger will be the dominant, he has an avarage life of 250 years.

many people often confuse the jockey-xeno with the deacon from prometheus and they tend to believe both are the same creature, but thats a brong idea! both are completely different creatures. the deacon is known as "protomorph" and is born from a trilobite + engineer and the jockey-alien is known as "ultramorph" born from a facehugger + space jockey.

In Alien Kane, Dallas and Lambert discovered a Derelict on LV-426 and inside they found a fossilized space jockey with a hole in his chest, meaning he was facehugged, but the jockey-xenomorph has never appeared in any of the movies. 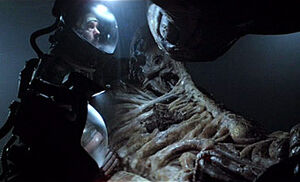 he has appeared in some comics (Aliens: Apocalypse - the destroying angels) and games (Aliens: Infestation) I had always thought that this creature is still alive and is hiding somewhere in derelict, bescause as we see in Alien:The Eighth Passenger, the derelict is not explored at the 100% and there are probably many other big rooms in there, just think about it is a huge ship, According to some speculations the jockey-xeno has probably died a long time ago for natural causes, witch could be true because the ship crash landed millions of years ago, but couldn't he been kept alive by the same fog that preserved the eggs...? haha thanks chris, I thought it was a reallly rare topic

There could still be something lurking around the old derelict for sure!

I have actually pondered this at length,

IMO the chestburster that was born from the unfortunate Engineer pilot on Acheron LV-426 is indeed still aboard the derelict Juggernaut. While some people will ascertain that the Xenomorph in question was a Queen, and that it burnt a hole down into the ships bowels before laying all the eggs down, I actually believe it was trapped into the Juggernauts "other arm" (see below) by the Engineer before he died. I believe that when he realised he had been facehugged the Engineer pilot activated the warning beacon before opening the doorway to the ships "other arm", programming it to close, lock and vent all the atmosphere within, the moment any movement within was detected. Thus I believe the not-so-little blighter is still in there frozen, and just awaiting someone to open the door.

"Other arm" - in Aliens the Jordens entered the derelict juggernaut via the opening caused by the collapsed 'hammerhead arm', whereas in Alien Dallas, Lambert and Kane entered through the vaginal entrances found at the ships centre. The "other arm" has yet to be explored, by humans at least.