Last year saw the release of the top-down shooter addition to the Halo franchise. Halo: Spartan Assault, developed by 343 Industries and Vanguard Entertainment crossed the iconic neon-tech look of the Halo games with the gameplay of classic shooters such as Smash TV and The Chaos Engine and was a moderate hit on the Xbox 360, Xbox One, PC and Windows Phone. The sequel, Halo: Spartan Strike was recently revealed, along with an announcement trailer...

The game features familiar enemies such as the Covenant and the Promethean's, in a story that overlaps the events of Halo 2, with new additions such as the Kestrel Hovercraft (essentially a UNSC variant of the Ghost – pictured below in MegaBloks). 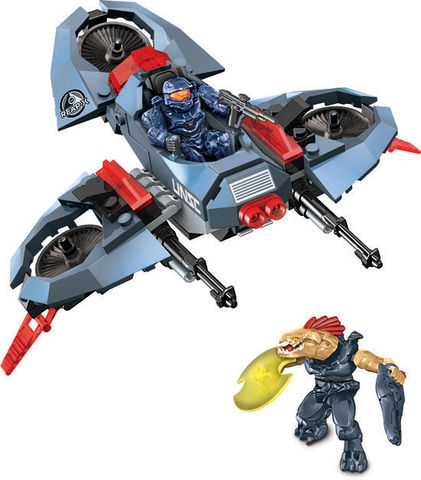 Reportedly the game is being released on PC (via Steam) and Window phone devices first on December 14th, with Xbox 360 and Xbox One versions of the game presumably following soon afterward. In a bold move, the game will not feature micro-transactions after criticisms received for the previous games use of the growingly unpopular practice. The game is also reported to unlock content for the Halo Master Chief Collection on Xbox One, including an exclusive emblem, nameplate and avatar.