Yesterday we saw a monumental amount of Star Wars: The Force Awakens news hit the web in celebration of Star Wars Day (May the fourth). There was so much revealed, it was easy to miss some of the many updates put out by various media outlets. Today, we take a closer look at Game of Thrones star Gwendoline Christie’s Star Wars VII character, the high-ranking 'Chrome Trooper', as referred to by fans. Her actual name is Captain Phasma. Professional photos of his armor both suited and un-suited were revealed during Vanity Fair's coverage of the film's production, which they boast in their latest issue. 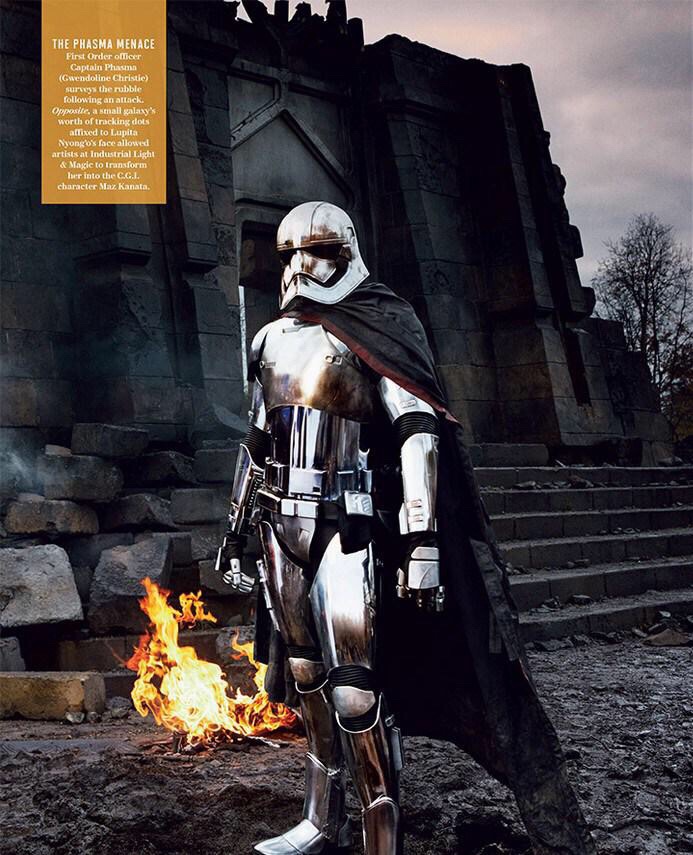 It's clear, Captain Phasma is going to be one bad-ass force to be reckoned with during The Force Awakens. The current rumor is that Captain Phasma is a Sith Lord in disguise. Early reports suggest that Gwendoline Christie was going to be the film's Sith. We should clarify, that the consensus regarding the use of "Sith" in The Force Awakens is relatively unconfirmed. Instead, we've heard use of the term "Dark Side User". Given that there are only ever two Sith in existence at any given time, a Master and an Apprentice, it's likely certain individuals have studied the arts and attempted to gain powers associated with the Dark Side of the Force on their own accord. But without a Master, they never attain the role of "Sith Lord", and remain proteges to the cause, being named "Dark Side Users" instead.

I'm sure as the film's marketing continues, more of these rumors will be fleshed out. Be sure to check back often for constant updates! What I don't understand, is why you speak of poor Gwendoline Christie as a he, when actually she's a woman... Also the black robed man's cloak resembles Kylo Ren's cloak simply because he's indeed Kylo Ren (Adam Driver), not Captain Phasma (Gwendoline Christie).

On the other hand the rumor that Captain Phasma will be a Darkside User too does circulates the web and there is a kinda spoilery thing in this other article wich MAY even prove this...

Other than this rumor, this article here is a pretty big miss (sorry if I offended you with this, I didn't want to), but thanks for sharing these images with us. :)