We are mere weeks away from the release of director James Gunn's newest addition to the Marvel Cinematc Universe, and the first non-sequel inthe MCU since 2011's Captain America: The First Avenger. Recently reports have added Josh Brolin to the cast as the voice of uber-villain Thanos, Nathan Fillion as a "Monstrous Inmate", and most interestingly of all is the possibility that Marvel Comics character and star of the 1986 cult movie Howard the Duck may be making an appearance, as spotted in the movies credits (pictured below) by Stitch Kingdoms. 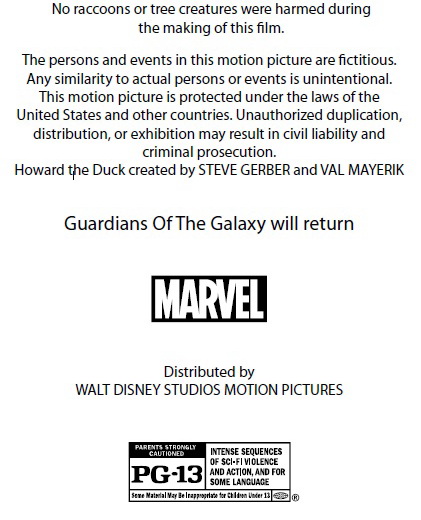 Heres a catch up on someof the better trailers and clips for Marvel Studios next movie Gaurdians of the Galaxy due for release August 8th.

I...Um...Wow. I usually wouldnt comment anywhere but the Godzilla page, but this just couldnt be ignored. This is certainly a noteworthy cameo. But i wonder what his role will be, i mean, where is he going to be? Just a random guy walking in the prison, will the guardians meet him and then just move on. Well, either way, im actually kinda excited to see this guy.