Google Doodle (an artistic variation of Google's logo usually refitted for holidays or important dates) currently has an interactive version of their logo that allows you to “make a movie” tokusatsu style. Google has debuted the new Doodle in honor of Eiji Tsuburaya's birthday. Today is the 114th anniversary of the Master of Monsters.

Eiji Tsuburaya was responsible for the special effects techniques that brought Godzilla to life, ushered a new age of Japanese cinema and created Ultraman. His influence is felt today in the likes of Super Sentai, Ultraman spin-offs and Kamen Rider. The upcoming Attack on Titan films are also heavily influenced by his techniques. Even Guillermo del Toro took Tsuburaya's influence on tokusatsu into account when designing the monsters for Pacific Rim. 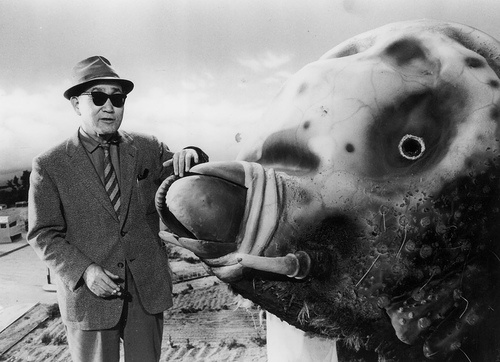 You can click here to enjoy the Doodle Google animation and read about the inspiration for it here.

Or simply go to the Google Search Engine and click the Ultraman inspired graphic.