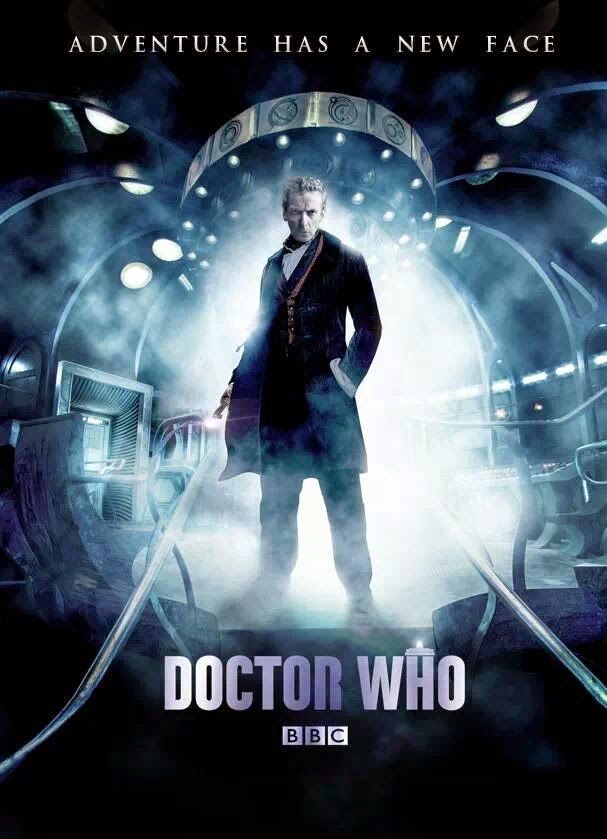 "The Caretaker" has proven just how damn enjoyable Peter Capaldi is in the role of the Doctor.
It is no surprise that this episode is just so much damn fun! Gareth Roberts co-penned this entry with Steven Moffat. Roberts was responsible for one of my favourite Matt Smith adventures "Closing Time", that episode was one of Matt Smith's most energetic, cool and entertaining performances during the 11th's run.
"The Caretaker" is no different.

The material allows Peter to deliver a truly splendid performance, the writing is also perfectly balanced to harness all elements of Capaldi's comedic and serious acting range. An exuberant mad man bouncing around the place adventure, the likes of "Closing Time", didn't seem like a fit for Capaldi when he was first announced as the Doctor, oh how this episode show us that even as an older actor he can deliver all of the wild, zany quirks that Smith brought us.

The plot focuses around The Doctor tracking some super armoured death destroyer ED-209 thingy or whatever.
That was the best thing about "The Caretaker", this episode could have had no antagonist, no robotic death machine, no creepy alien or any of that and it would still have been instantly one of the most enjoyable Doctor Who episodes due to the writing, performances and brilliant high tempo whimsical score.
The best movies and episodes, in my opinion, are the ones where the relationships and interactions of the characters go beyond exposition and what is required for the basic plot. Those stories that have characters you value, hooking you in and making you just want to watch them endlessly interact, regardless of the actual surroundings; the ones where the characters exist not to just chase a MacGuffin, it is those stories that make for truly engaging dynamic watches.
If, as a writer, you can take your characters out of their setting and people would still watch them, that's some solid writing.
"The Caretaker" certainly delivers that in an abundance.

Capaldi is an absolute joy to watch, his sarcasm, snide remarks, air of superiority and raw arrogance are bang on form, I can not praise this performance enough.
His insults hurled at Mr Pink (Samuel Anderson) will probably get plenty a smart mouthed kid in hot water come recess Monday.
The Doctor's own sense of self belief makes for a humorous misunderstanding, the scene in which he believes he knows who Clara has been dating at the school makes for a good chuckle when The Doctor approves for obvious reasons.
The Doctor knows Clara has been dating and when he sees a floppy fringed, big chinned, tweed wearing, bow tie sporting fellow teacher...well The Doctor naturally comes to the conclusion that Clara's interests lie in Adrian (Edward Harrison) for, as said, obvious reasons, ie he looks similar to Matt Smith, do pay attention.
Aside from The Doctor this is by far the best material that has been handed to Jenna Coleman, she was a laugh riot from the get go. Whether it be juggling two lifestyles, bantering or making terrible excuses, I can honestly say that post Doctor Who her comedic ability, as showcased in episode 6, should see her bag plenty of Hollywood/UK feature roles.
Now I haven't mentioned Samuel Anderson previously, his part in the series, although sizeable, had been rather bland and not worthy of really talking much about. Even in "Listen", which is basically "his" episode, there were more interesting things to focus on. That has been vastly improved with "The Caretaker", a character that was coming across as a human Ficus, (Human Ficus -  you put one in the room to add something to it but ultimately no one gives a stuff it's there), is suddenly given some decent pages to read. The scene in which he confronts The Doctor brings out something more from Anderson and he in turn allows Capaldi to do what he does best, be an aggressive bastard.
The two characters finally go face to face and it works in the context well.
So all that said I really hope we get more episodes from this Roberts/Moffat collaboration providing plenty of catchphrases and sharp wit.

So this week the opening to the episode shows how complicated it actually is to be The Doctor's companion. Clara has a day to day Earthly life, a job, friends, family and Danny. Amy Pond didn't have to deal with this aspect of the position as much since she would just run off with The Doctor for extended periods of time, for the most part. Then obviously Rory came along for the ride, so there was not the same kind of juggling going on. However Clara is teaching by day and adventuring by night. The way the show approached this was perfectly written and toned for great pacey comic effect and the whole opening segment was wonderfully filmed and edited.
It takes the idea of how some people attempt to balance two lovers and obviously twists it to ask "now what if one of the partners was a time traveller?" Well ok one of them is and he has a time machine so she shouldn't be running late etc but whatever!

So what's the adventure though? Well under the guise of "John Smith", a regular alias of The Doctor, the Time Lord goes under cover, "deep cover", at Clara's school on the hunt for a Skovox Blitzer.
Normally it is Clara who is in The Doctor's world, this week The Doctor is in Clara's space and as we know, from previous attempts, for our Doctor blending in has never been one of his stronger points.
So we get Capaldi running about a school doing his weird crazed eyebrow thing and plenty of jokes.
All in all the story is pretty standard, mechanised death machine, timey whimey trap, doesn't work out too well, then gasp last minute save the day style stuff...but still full of fun.
Unfortunately for all the positives from this episode in regards to Anderson's character, one of the biggest laughs came right at the end and not from a joke. The somersault final distraction was pretty damn weak to say the least.

Of course there is an Alien terror involved in the form of the aforementioned Skovox Blitzer, which is actually one of the crappier cybernetic adversary to get a taste of the sonic screwdriver.
The actual production value on it was pretty low, not to nit pick too much but that is now 2 for 2.
Last week's "Time Heist" had a solid creature design but ultimately was a bland non event really and this week the enemy from another world looked like it had been put together by a high school drama class. The producers probably agreed with that when seeing the final prop hence opting to shoot the Skovox Blitzer with tighter angles and speeding up of the footage in post to try and hide the tackiness of it. Also by giving Clara the joke about it being a kid in a costume for a school play, I am guessing maybe someone made that remark when first seeing the finished product and it worked its way into the script.
I think they must have blown the budget on The Doctor's proton pack.
However that doesn't take away from the episode as everything else, as I have said, is so much fun!

The episode ends with another glimpse of the seasons main arc, that of the Nethersphere, and for anyone familiar with Supernatural there is a big similarity between "The Promised Land" and Supernatural's Heaven being depicted as a white bureaucratic set up. 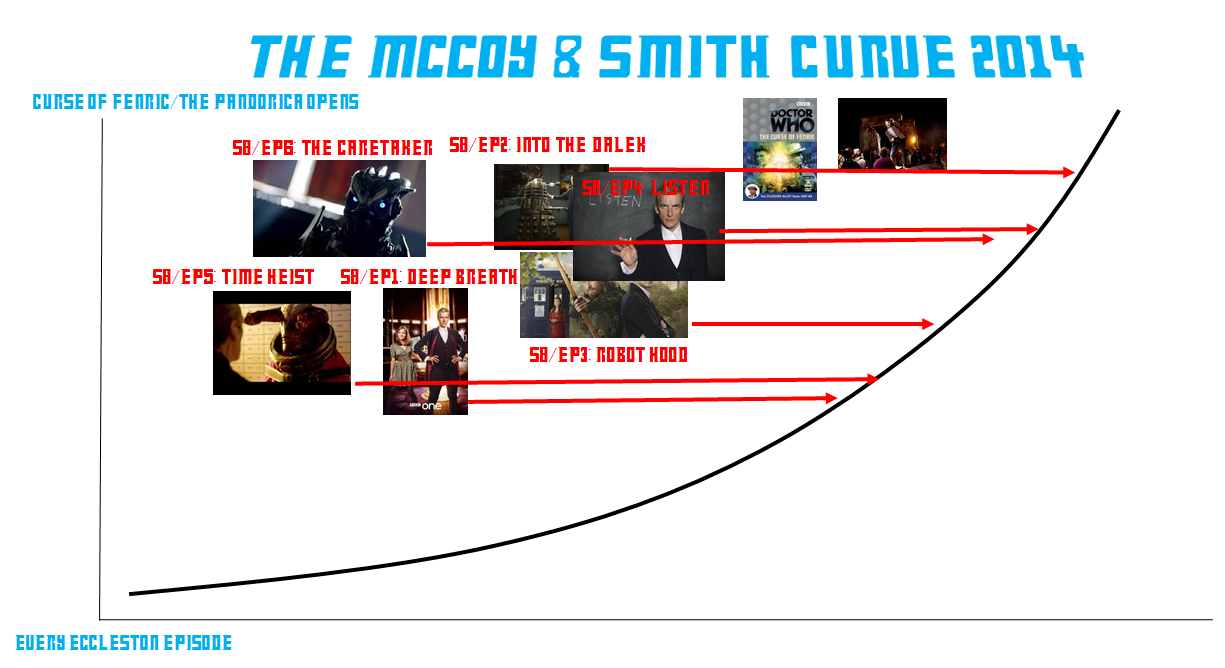 Yeah I really enjoyed it and based on next weeks preview it is going to be a much required upbeat episode as "Kill the Moon" looks set to a "serious one".

What do you think of the new series? Enjoying it? Is Capaldi the right man for the coat?


Check out the sneak peak below of next weeks gripping adventure...

***WARNING SPOILERS AHEAD*** Well it wouldn't have even taken George Clooney to bust open this bank! The universe's most secure financial facility riddled with ... Read More

Guillermo Del Toro’s Sci-Fi/Horror series finally makes its UK debut tonight at 10pm on Watch. The series which is a new addition to the UKTV networks line up of hit US sh... Read More

Every Summer has a King...or Queen...don't shout at me I said it.    So with another Summer frenzy over at the Box Office how did 2014 perform? ... Read More

"This is Mr Nesbitt of Harlow New Town. Mr Nesbit would you stand up please. (after a pause - nothing happens) Mr Nesbitt has learnt the value of not being seen... Read More

Doctor Who: Men in Tights! Well now we are on episode 3 and we see that Capaldi does still get to have fun with the role and all without having to resort to man fall down jokes.... Read More

0 Fan responses to Doctor Who - The Caretaker Review