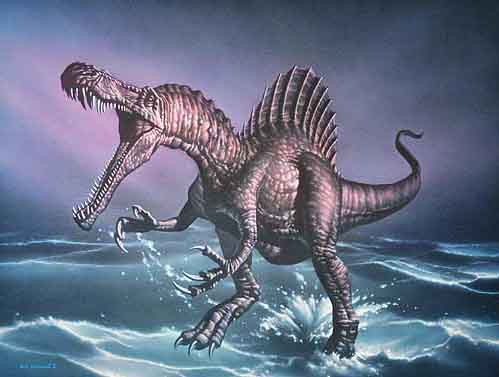 S. Aegyptiacus lived in Egypt in the Mid Cretaceous. This individual is 52 feet long and 7 tons.

Smelling a fresh Diplodocus, a Spinosaurus Maroccanus, more terrestial than it's cousin, S. Aegyptiacus, waklks out toward the kill. It approaches a lake, and there it sees it's larger cousin, Spinosaurus Aegyptiacus.

The S. Aegyptiacus expected this. He turns around and bites his smaller cousin in the neck. He thrashes the body around, then throws it to the ground. The Spinosaurus Maroccanus can't react fast enough this time, and it faces the hungry jaws of the Spinosaurus Aegyptiacus.

The larger Spinosaurus then eats his new meal, and it's not cannibalism. It's just not. 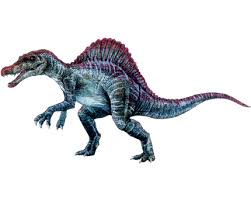 His size, intelligence, and basic agitation helped him win.

Part One:    Godzilla slept on the bottom of the ocean, absorbing radiation and healing his wounds from his epic battle with multiple kaiju. However, soon, he felt a sha... Read More

Part One     Godzilla, the King of the Monsters, awoke to the sound of destruction. He was resting near the coast of southern Japan, and something disrupted him. He... Read More

Well, we're at the end of our Dinosaur Fight Arena. First, let's meet our contestants:   Utahraptor Utahraptor was a medium carnivore that lived in the United States in t... Read More

A cliche battle! First, let's meet our contestants:   Triceratops Triceratops was a medium herbivore that lived in the United States and Canada in the Late Cretaceous. Th... Read More

Sorry for the wait, but we're back! First, let's meet our contestants:   Utahraptor Utahraptor was a medium carnivore that lived in the United States in the Early Cretace... Read More

I went by hieght and length for size. Scified JW studies show Spino as really light.

Spino is pretty light though, even some paleontologists agree with that.