Lets face it, there has been a lot of hype surrounding Bungies Destiny, but is this “Shared World Shooter” any good? Is it worth adding to your game collection? You'll find the answer to the first question right here.

The best analogy to describe the “Shared World” element of Destiny would be that of a school playground – each group of children will be playing different games to each other but with the same area, the playground. Each area in Destiny is one vast map in which multiple players can play within regardless of the missions they are actually playing. Being an online game, the player will frequently play with other players of the Destiny community, unless playing specifically with a group of friends. Mission types seem to be split into three distinct types. 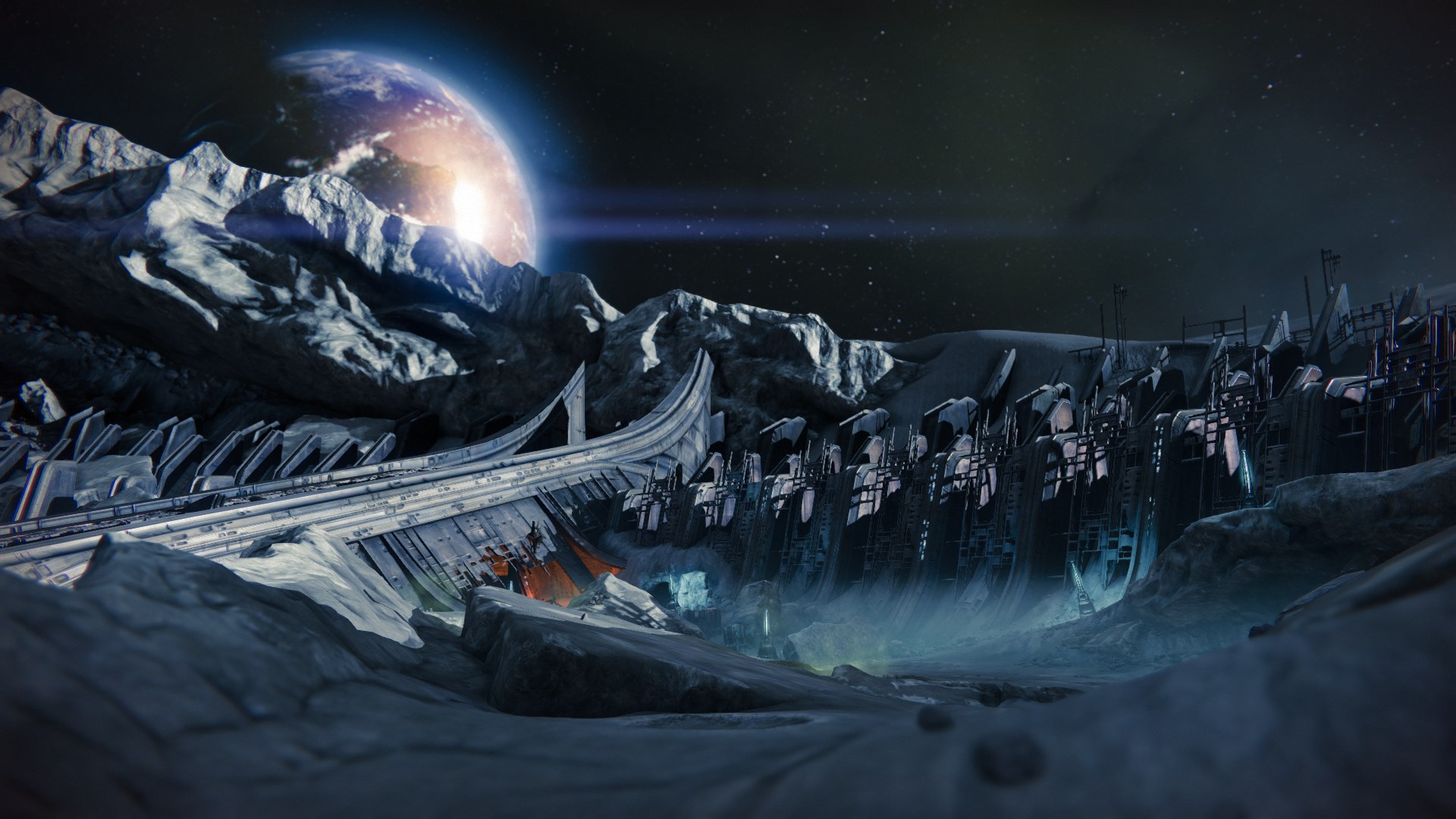 Destiny's graphics are impressive, regardless of which system you play on!

The games mechanics are similar to Halo (unsurprisingly), with the exception that most weapons are easier to shoot when using the aim button; shooting from the hip isn't advised unless you are up close an personal, though in such circumstances it would be more advantageous to use a melee attack. The three character classes, Titan, Hunter and Warlock help add to the games mechanics by giving the choice of three distinct playing styles, which can be diversified even more through the games levelling up system, which will in time allow each class to focus on various subclasses. Hand-in-hand with the levelling up system is the games vast choice of customisation, with many, many options such as weapons, armor and vehicles; all of which can be applied to one of three races in the game – the Awoken, the Exo's and the Humans. Don't worry though, the game allows you to have three characters, all of which will share the contents of the your vault; the games storage system found in the city. The City is the games safe zone where players can purchase new items, choose challenges, collect rewards and access the Crucible; the games multiplayer versus arena for fans of deathmatch action. 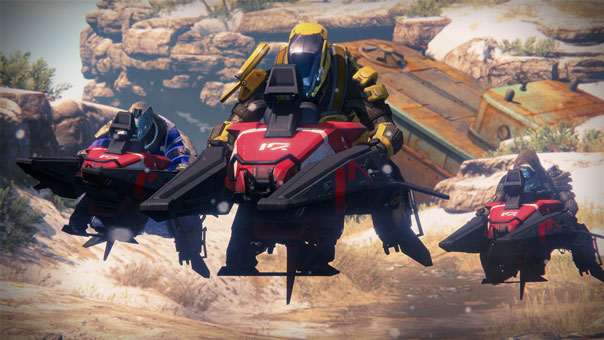 Destiny's maps are so large you wil need your trusty sparrow to get around!

Unlike games like Halo and Gears of War, in which the progress through the games linear action is almost seamless, Destiny allows players the freedom to choose their next destination upon completion of a mission or when finishing browsing the wares within the city. The downside of such freedom is that the games repetitive nature becomes more obvious. Ultimately you get a slower paced, longer lasting and more rewarding play experience that just gives you hardcore action in bite-sized chunks.

All versions of the game are identical in terms of core content, so for those with multiple systems the only real deciding factor in which version to get is player population, which is in itself decided by the fact that the next generation consoles, as powerful and spectacular as they are, just don't have. 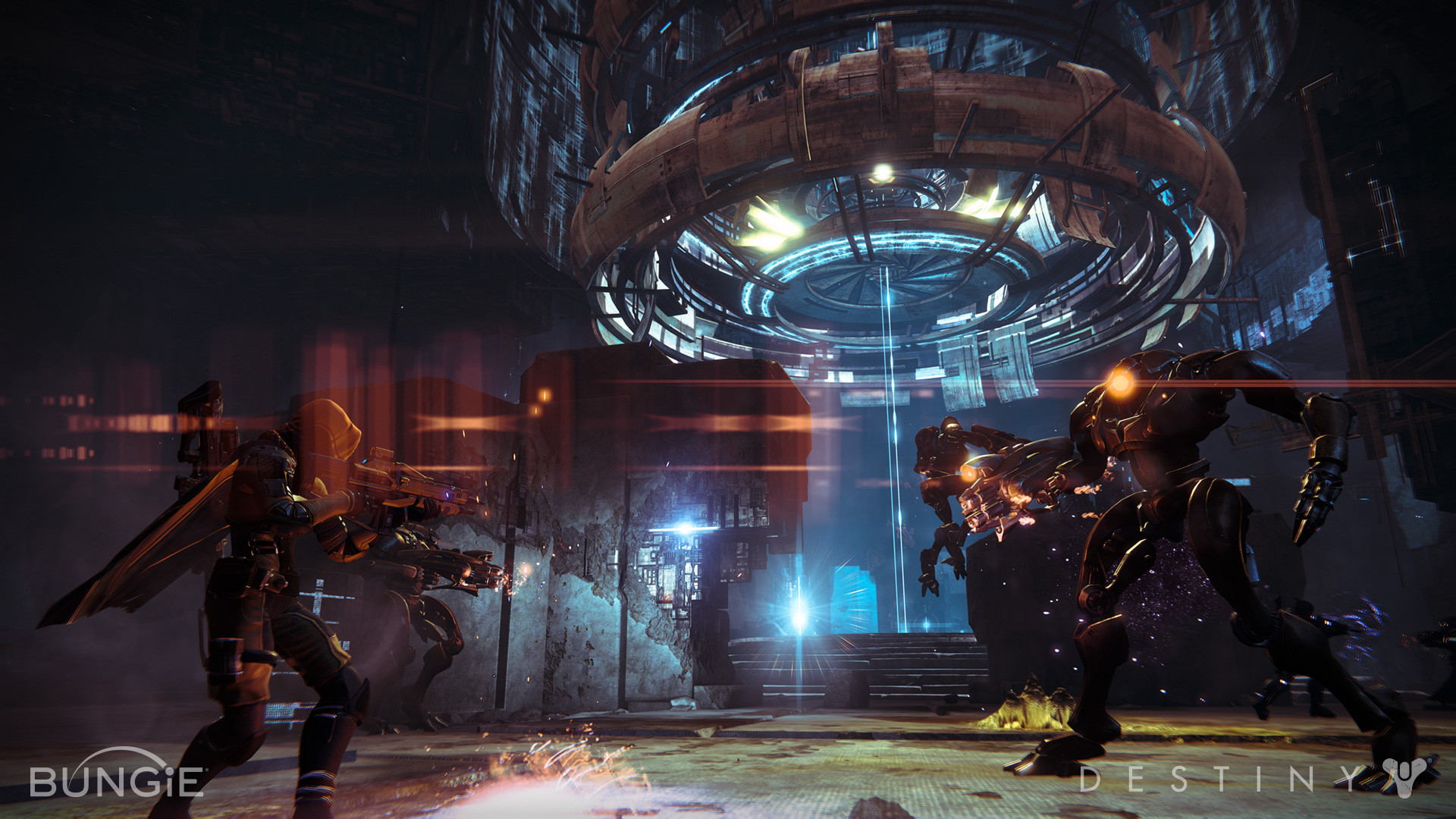 Ultimately Destiny is a fun, action packed game with a casual pace to it. The story is quite frankly as convoluted as any MMORPG it part emulates, but with X-Men Days of Future Past's Peter Dinklage as your companion you will enjoy the ride nonetheless; the only real problem is at the end of it you won't care about what does or doesn't happen, but you will be glad to have played an entertaining game that dared to be different, took a risk and opened your eyes to the possibility that the future of video games isn't as stale as you feared. But is the game good enough to add to your game collection. That all depends upon your wallet. While Destiny may be an experimental step in the right direction it comes at a price. The standard version of the game sells for around £50 or $75, but the Expansion Pass, which will add more content in the coming months (as is the par for the course with video games today) is an extra £35 or $55, which all in all comes to a whopping £85 / $130.

Worth Buying, but far from being Bungies new “Halo”!

Has it really been two years since the release of Destiny? Yup, the mega-budget sci-fi shooter may have been on the market for quite some time now, but it sure doesn't seem to slow... Read More

If you haven't yet played Destiny, you might want to wait until the 20th of September, when Activision release the Destiny: The Collection. This new version will include the origi... Read More

A user going by the name of Skruggle has posted several images on reddit of one of two areas he managed to glitch in to in Destiny .  As well a name for the bunker has surface... Read More

Being a huge fan of the MMORPG side of gaming I have had nothing but praise for Bungies amazing console creation. Okay, the loot system and rewards after strike and match making h... Read More