Two Chimpanzees, Vali and Sugriva, both two years old, have been featured on American news broadcasts, for watching Dawn of the Planet of the Apes in the BigD Auditorium at the Carmike Cinema, Myrtle Beach, South Carolina; the chimps were of course accompanied by three human slaves, sorry handlers. The two chimps, whom are reportedly great fans of the movies 2011 predecessor Rise of the Planet of the Apes, entered the cinema and paid for their own popcorn and juice before sitting down to watch the movie, much to the surprise of roughly 1,000 human moviegoers already seated in the theater. 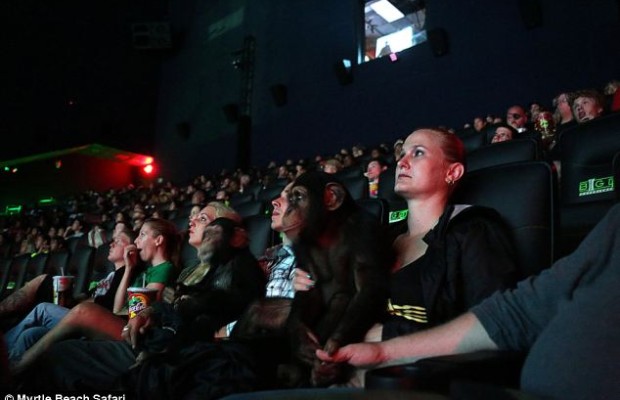 Speaking to the Daily Mail, Dr. Antle of Myrtle Beach Safari said of the experience...

"They are smart – they knew to hand over the money to get their food and drinks. The older one, Vali, is a very bright guy, he’s watched the Lord Of The Rings many times, and he could follow the whole plot of the movie. He loves to clap – when he likes something he claps, so he clapped for the good guys, and when chimps don’t like what’s happening they hoot or bark, so when the bad guy came on he was barking.’

"A couple of people said very clearly 'are you sure they should watch this movie, won’t they learn to take over the world?' There were several people actually concerned about that."

I'm concerned about it...

Hm. Interesting...So, who wants to help me build a bunker and weapon arsenal? :D

Quickly you fools! Fortify the bunker! *Grabs wood and a hammer*